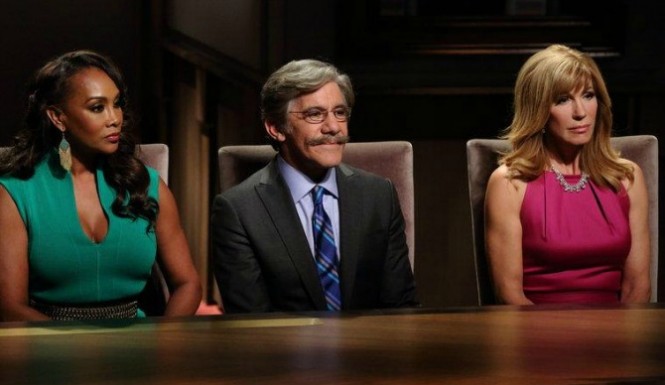 Trump did an online Q&A last week that explained the mass exodus of Team Infinity despite their five task winning streak. The motive was obvious. Scheduling. Does this change anything?

Not really. The whole thing was poorly handled. Trump could have fired two of them and brought back the other as part of the final four and still had his Geraldo/Leeza final. Vivica never had a chance.

I’m actually at Universal Studios as I write this, which makes the final task quite bizarre for me. Universal has hosted two infamous tasks. Rod Blagojevich had his communication blunders with the opening of Harry Potter World back in season three and Dee Snider commissioned the redundant cardboard cut outs during All-Stars.

This task seems a little less chaotic, though with some (expected) laziness from Johnny Damon and Brandi Glanville. If anything, their beer drinking, roller coasting riding antics showed the precise reason why they’re not in the finals. I don’t think I’d be too surprised if either one had done that if they’d made it to the end.

The teams for the final task are always awkward. It’s not really a team anymore. It’s a dictatorship. That’s why Lorenzo getting all pissed off about Geraldo changing everything doesn’t make sense. Lorenzo is there to help. That’s it.

We saw Debbie Gibson pull a similar, albeit more extreme stunt, when she wanted Clay Aiken to trust her cousin’s mural painting abilities. It’s not surprising that these D-list celebrities have big egos, but this one of the few times where it’s not exactly justifiable.

Who’s going to win the task and become the next Celebrity Apprentice? Geraldo. He’s got the money and Josh Grobin, who’s significantly more relevant than Olivia Newton John. Leeza might be able to beat his video, but probably not by a wide enough margin for it to matter.

I think Trump likes Leeza better, but the problem is that he doesn’t dislike Geraldo. The past two finals have been largely decided by Trump’s nepotism. Arensio Hall beat Clay Aiken because he was trying to get a new late night show and Trace Adkins beat Penn Jilette because Penn badmouthed Trump in his book (a good book by the way). If it was Leeza vs. basically any other contestant, this would be a no brainer.

The pre-show montages were kind of nice. I would have preferred more episode to them, especially given my embarrassingly thorough knowledge of the show (almost all my throwbacks are from memory, though I usually fact check them to be sure). The problem with the montages was that they reminded us that this season has been rather brief.

Is this a good thing? Maybe. I’m annoyed that they’ve burned through the episodes, but I’m not exactly sad we weren’t treated to more Kenya Moore. #BabiesLuvBuns was enough. Kevin Jonas’ reappearance doesn’t exactly make me wish he’d lasted longer either.

Between Kenya/Brandi, Kenya/Vivica, and the Geraldo/Ian/Kevin/Lorezo battle that never really was, there was plenty of potential for a great season. We didn’t really see any of those evolve into a Piers/Omarosa or a Joan/Annie. Which is a shame, but maybe that’s why they edited the episodes the way they did. It’s not like NBC has much else on the air.

So I’m calling it for Geraldo. Some big screw-up could change everything. Leeza isn’t fierce enough a competitor to stop him. She reminds me of Arsenio, who also coasted his way to the finals. Problem is, Geraldo is no Clay Aiken.