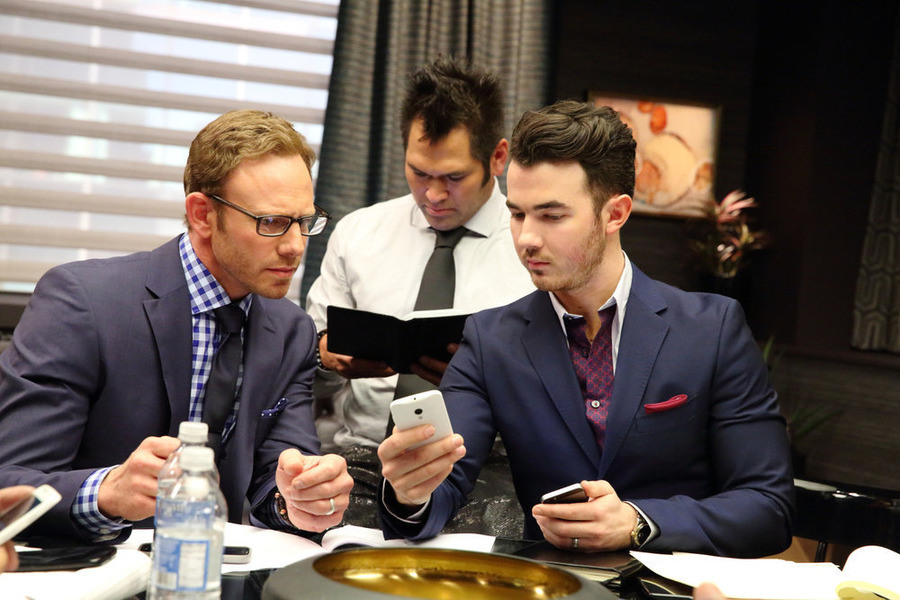 It’s hard to believe it’s been two years since Celebrity Apprentice All-Star. Which means it’s been three years since we were introduced to an entirely new cast of D list “celebrities” to participate in Donald Trump’s faux reality competition. With stars like Kevin Jonas, Gilbert Gottfried, Shawn Johnson, and Terrell Owens on board, this season looks to be a strong one for the venerable rigged contest.

First episodes are always more about the contestants than the task itself, which makes fundraising challenges the perfect type to start with. It’s important to note that at no point was pie making a central focus of the task. The money is the only thing that matters.

Over the years, we’ve seen Trump and the show itself try to circumvent the fact that the battle of the rolodex doesn’t exactly make for suspenseful television. The past two seasons have featured project managers Paul Teutul Sr. and Trace Adkins bring in such large donations that they barely cared about the task itself at all.

This is where naivety can really come to bite you in the ass. It was pretty clear about thirty-five minutes into the two hour show that not only would the women lose, but that Keisha Knight Pulliam would be the one to go. What was unusual was how blatant Piers Morgan was in essentially telling her that social media didn’t matter at all. Not very Celebrity Apprentice-like to be upfront about it being all about the big money.

Starting off with a money challenge also shows the audience who the real players are right off the bat. It’s an unwritten rule that the PM has to pull most of the weight in a money challenge since his/her team is the only beneficiary of the money that people are presumably saving for themselves. Lorenzo Lamas isn’t going to hit his mother up for two hundred dollars if it’s going to Geraldo Rivera. Surviving a task like this is all about bringing in enough to not draw attention without wasting any of your own high rollers.

The task was pretty straight forward. No one expected Pulliam to beat Rivera. The boardroom was a little more interesting than expected. The Rivera/Jonas dynamic is one to watch out for, especially when Rivera is no longer PM next week. But there was a ton of potential for a Pulliam battle with Kate Gosselin, who had the weirdest boardroom rants since Lou Ferrigno and his 110%.

Raising chump change on a money task when you’re the project manager gets you fired plain and simple. But Gosselin could have been taken down by a savvy player like Omarosa. Problem was that Pulliam was boring. Gosselin had a chance to sink her own ship, but she’s entertaining and that’s what matters. There’s a reason why the show keeps people like Gary Busey, Dennis Rodman, and Rod Blagojevich around as long as humanly possible. They make for good TV.

It’s hard to see who the real frontrunners will be moving forward. Rivera’s attitude doesn’t seem like it will help him in the long haul. He looks destined for more of a Gene Simmons type tenure. Jonas is the most complete package of any of the contestants. He’s outspoken and has a lot of money. Johnny Damon could be a darkhorse, but the men don’t appear to have a ton of juggernauts on their team. It remains to be seen whether Sig Hansen will resemble Paul Teutul or Jesse James in terms of usefulness.

I don’t think the money will flow quite like it has without a deep roster of money laden celebrities. But the personalities are certainly there. Gottfried delivered right off the bat, looking like savvier Adam Carolla. Snowboarder Jamie Anderson showed charisma and personality. Even Gosselin was surprisingly likable until she started rambling in the boardroom. It should be a very exciting year for The Celebrity Apprentice.

« The Case of the Cutter at Dunkin Donuts
Celebrity Apprentice Recap: Episode Two »