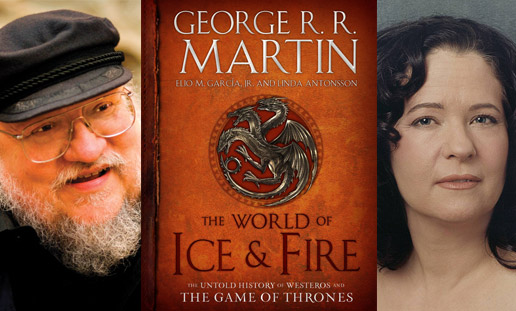 Last night I attended a talk regarding The World of Ice and Fire with George R. R. Martin at the 92Y in NYC. The event was crowded, though not sold out, and Martin supplied an evening of observations concerning the world of Westeros and the kind of work that goes into creating a book like this. For this article, I wanted to highlight some of the parts of the event that stood out.

Martin was quick to distance the moderator’s suggestion that The World of Ice and Fire was his answer to Tolkien’s The Silmarillion, reminding the audience that the GRRMillion is still to come. Instead, Martin compared TWOIAF to the numerous illustrated fantasy series that have come before. He also discussed the process that went into making a book like this, crediting Elio Garcia and Linda Antonsson with the initial rough draft before deadlines at years of delay and excessive word counts clouded the picture.

Martin also talked about the difficulties he found when it came to revealing certain parts of the history that haven’t been covered in the books or the novellas. Summerhall was specifically singled out as an event he wanted to save for a future book and orchestrated a careful dodging of the event. He did say that both Garcia and his editors persuaded him to include more new material than he initially intended.

While there was no mention of The Winds of Winter, the notion that there will be seven or eight Tales of Dunk & Egg was reaffirmed. D&E actually got a surprising number of mentions, including an illustration of Ser Duncan the Tall fighting as a member of the Kingsguard. The GRRMillion was also talked about many times, though it appears to be at this point largely theoretical.

Mentions of Game of Thrones were kept to a minimum. At one point, the moderator suggested that this was intentional. Martin was complimentary of the show’s decision, including the placing of the Eeyrie’s moon door in the floor rather than the wall. The show served as a contrast to the artwork of TWOIAF, which was able to capture Martin’s own vision in a way that television simply cannot realistically achieve.

All in all, it was an enjoyable evening that supplied more information than was to be expected from that type of event. Questions like “who is your favorite character” were excluded and the general tone didn’t shy away from spoilers though there were few to be had. Martin is a living legend and it was a treat to see him in person.

« The Importance of George R.R. Martin’s Anthology Work
Mr. Molesley: The Man, The Myth, The Legend »