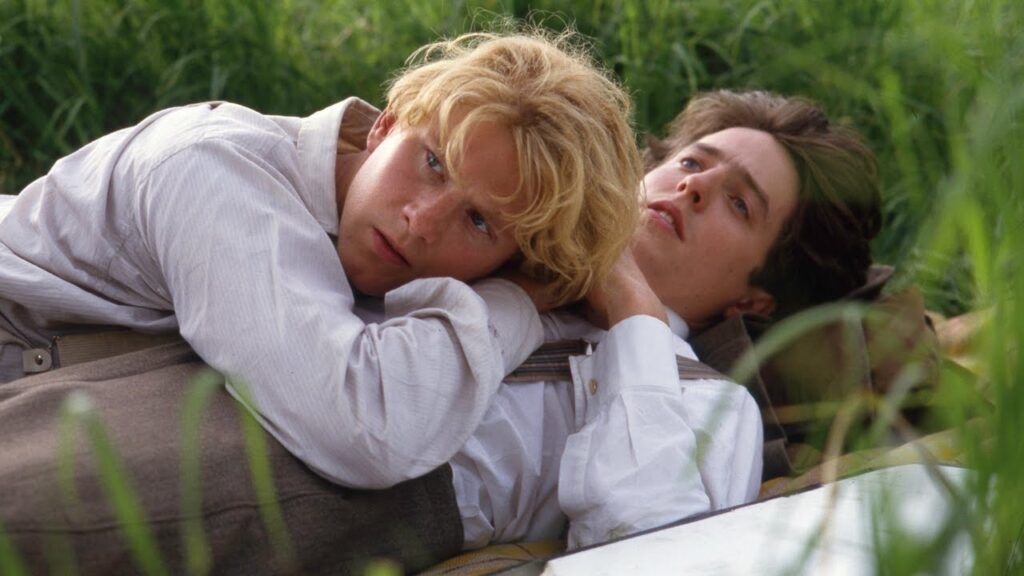 The major advances in the fight for LGBTQ equality can make it easy to forget how much of a death sentence being gay used to be in a so-called polite society. Prior to 1967, male homosexuality was punishable in the United Kingdom by prison sentences with hard labor, a lifetime of shame, and ostracization to follow. As history has demonstrated time and time again, punishing people for being gay does not in fact stop anyone from being gay. The gay cannot be whipped, beaten, or prayed out of the individual, a reality that much of the world is still, unfortunately, grappling with.

The 1987 film Maurice adapts the E.M. Forster novel of the same name, published posthumously after the author’s death undoubtedly to shield his own homosexuality. Set at the tail end of the Edwardian era, Maurice (James Wilby) is a lazy affluent student at Cambridge, not very adept at concealing his own sexuality. A fellow gay classmate Risley (Mark Tandy) catches on, playing matchmaker between Maurice and Clive (Hugh Grant), the two possessing instant chemistry, the kind of effortless passion that fuels countless romance narratives.

Of course, gay people are not supposed to fall in love, especially not in pre-World War I England. The breezy lifestyle of the leisure class serves as an exceptional incubator for Maurice and Clive’s romance, picnics in the grass, and nothing to worry about except one’s attire for the evening. That, plus England’s egregiously regressive punishments for homosexual conduct.

Like the early 1900s, 1987 was not a particularly easy time to be gay either. With the AIDS epidemic sweeping the globe, Reagan-era puritanism looked to the virus as a way of punishing homosexuals for our perceived vile way of life, the exertion of God’s will upon the wicked. Decades before HIV’s discovery, Maurice’s generation had a similarly dismal prognosis on life.

Director James Ivory understands the political implications of his film better than anyone. Maurice rises above its predictable narrative through its resounding commitment to the idea that happiness will always triumph over a life in the closet, no matter the cost. Maurice isn’t a particularly interesting character. Wilby’s wide-eyed optimism bails out the messier aspects of his performance, particularly his clunky intimate scenes with Grant.

Gay happiness remains a radical idea, over a century removed from the events of the narrative, and fifty years after Forster’s death. Ivory does right by the source material, making great use of his locations to highlight the contrast between the freedom that all the space a country house allows, and the reality of the unsustainable cost of retaining who you are as part of that society. The punishments for homosexuality were severe, but repression is itself a death sentence.

Laws banning homosexuality attempted to craft an easy outcome for gay people. You’re not supposed to want to sacrifice everything, but that’s also a fundamental point that anti-LGBTQ legislators fail to understand time and time again. You can threaten someone with the worst consequences imaginable. You can take everything from them and strip away every fiber of their dignity, but no amount of homophobia can squash that basic human desire to be fulfilled.

Countless countries have committed egregious atrocities against their LGBTQ citizens. Maurice is a needed reminder of how irrelevant the stink of hate can feel to a mind at ease with itself. Love cannot be conquered by society’s efforts to legislate it out of existence.

Confessions From My New Vagina (Promo)

We are delighted to welcome Nomi Ruiz, star & producer of the new film Haymaker. Nomi talks about her experiences making the film, incorporating her music background as a singer into the narrative, and the importance of authentic transgender storytelling both behind the scenes and on screen. Haymaker is in theaters, VOD, and Digital on January 29th

Ian’s review of the film: https://ianthomasmalone.com/2021/01/haymaker-is-a-worthy-entry-into-the-trans-film-canon/

Rudolph with your nose so bright, won’t you guide my sleigh tonight? Such is the question Santa posed, after committing acts of intolerable cruelty against the poor young reindeer merely because he was born different.

Transgender people have heard this story before.

The TV special Rudolph the Red-Nosed Reindeer reinforces casual bigotry. Its Santa is a giant asshole. Santa & Coach Comet can go straight to hell. No reindeer games, no presents, just a steaming pile of coal and permanent place on the naughty list. Never allow your oppressors to gaslight you into pulling their sleigh.

Grab your jetpack and your Sarlacc pit, Boba Fett is back! The long-awaited return of everyone’s favorite tertiary bounty hunter lived up to the hype. Temuera Morrison was absolutely superb.

Ian provides some context for Boba Fett’s popularity, including his debut in the beloved Star Wars Holiday Special. Mando might not be very good at watching his son, but at least Grogu has darksaber to keep himself occupied.

100th episode of Estradiol Illusions! We dive into what Ian thought was the best episode of The Mandalorian ever, steeped in Star Wars’ lore. Ahsoka Tano’s live-action debut was flawless. Baby Yoda’s name reveal, not so much. Do we have to call him Grogu? Ian doesn’t want to.

Thank you everyone for following us these for 100 episodes. Here’s to another hundred!

Episode four takes us back to Nevarro, the pile of rocks not named Tatooine or Jakku. While Baby Yoda munches on space macarons, Mando, Greef, and Cara Dune seek to blow up the Imperial Remnant’s lava base. Prequel fan favorite midichlorians return, evoking nostalgia for Jar Jar Binks.

Join ITM as she breaks down an uneven episode that pulled itself together right as the action started. Halfway through the season already! Time flies when you’re using the force to steal cookies.

Join ITM for a discussion of a vast improvement over last episode. Three episodes in, the plot is finally moving forward! Cozy up with a bowl of octopus chowder and tune in for some Star Wars analysis.

Chapter 10, “The Passengers” was a bit of a mixed bag. The stellar action sequences were hindered by some pretty abysmal plotting and narrative choices.

Are we supposed to care that Baby Yoda is casually eating the last of Frog Lady’s eggs? Join host ITM as she breaks down this peculiar episode.

Today we begrudgingly host Sahm Flinehan (Sinner) to the show. Sahm is the creative force behind such TV shows as Sister Ned and The ITM Crowd, who was recently banned from Twitter due to his obsessive transphobia. Sahm talks about the origins of his bigotry and what he’s been up to since his wife divorced him. Such is the life of gender critical radicals who toss their lives away in favor of endlessly pursuing marginalized groups.

For more of our coverage of gender critical ideology, check out our interview with Cosy Snarker