house of the dragon Archive

House of the Dragon delivers a gripping finale that brings its first season full circle. 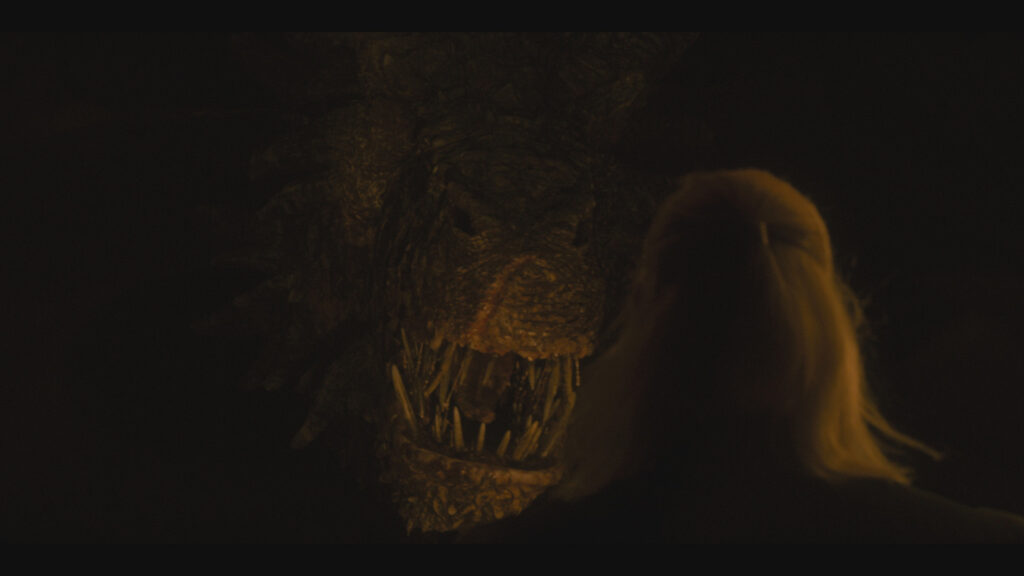 House of the Dragon headed into its first finale with one simple mandate. All the chaotic time-jumps and recastings that threw ample hurdles at an audience just trying to learn its characters’ names served the singular purpose of getting all the pieces in place for the main event, the last dance, to borrow a phrase from Michael Jordan’s documentary that saved America from boredom in the early days of Covid. Episode ten, appropriately titled “The Black Queen,” had to deliver a suitable rationale for letting a family squabble devolve into a realm-shattering war.

The absence of the Dragonstone crew from the previous episode embodied a broader problem for the show’s back half. Rhaenyra functioned early on as the closest thing to a definitive lead for House of the Dragon, lacking a clear counterpart like the dynamic between Jon Snow and Daenerys Targaryen in Game of Thrones, the ice and fire. House of the Dragon had to clear over a decade of backstory before it could introduce characters like Aegon and Aemond, vital figures for the rest of the events of the series. “The Black Queen” gave the show a chance to come full circle, resolidifying Rhaenyra as the emotional core of the series.

Emma D’Arcy showed off their range repeatedly throughout the episode, Rhaenyra contending with the deaths of her father, stillborn daughter, and second son all while preparing for war in the infancy of her reign. Rhaenyra’s coronation was easily the most moving scene of the season. The acting, score, and cinematography demonstrated the Westerosi sense of awe and wonder at its best, a high point for the entire franchise. Matt Smith beautifully captured the reverence that Daemon holds for his wife, even as he bristles with restraints on his appetite for control.

The episode did highlight the show’s broader disconnect toward how its own characters might be received over the course of its sprawling, chaotic season. The defection of Kingsguard member Ser Erryk Cargyll delivered an emotional moment when he revealed the crown he spent much of the previous episode acquiring, putting himself in opposition to his brother Arryk. There’s easy sympathy to be had in the idea of twin brothers going to war against each other, but Erryk and Arryk have received such little screen time that it’s hard to care much about them as characters.

A similar predicament befalls the scene between Corys Velaryon and Rhaenys Targaryen, the former lamenting the current state of his family. House Velaryon has had a mess of a season, with plotlines such as Corys’ effort to marry his prepubescent daughter to an old man, the marriage of his closeted homosexual son to Rhaenyra, and the execution of his younger brother for stating the blatantly obvious reality that his grandchildren from that marriage did not possess an ounce of Velaryon blood. It’s hard to take House Velaryon seriously when the show remains so hellbent on making them the patsy for every storied Westerosi pastime such as incest and adultery.

Anyone who’s read the novellas that make up Fire and Blood would be excited for Lucerys’ ill-advised trip to Storm’s End, a plan so stupid that House of the Dragon wisely chose not to spend much time explaining it. After an extended sequence where Daemon hurled excessive amounts of exposition into Westerosi geography, the show wisely didn’t try to explain Rhaenyra’s senseless decision to send her young children as envoys to anyone other than reliable allies. Lucerys did not really travel to earn the support of House Baratheon, but to get killed by his uncle, giving his mother a worthy excuse to go to war against the Green’s.

Lucerys didn’t make much of an impression in his limited screen time, but Ewan Mitchell seized every opportunity to endear Aemond to the audience. The beautiful sequence of the behemoth Vhagar chasing down the much smaller Arrax represented some of the best special effects we’ve seen from either House of the Dragon or its predecessor. The audience doesn’t need to care that a young boy was senselessly murdered, not when his uncle is the far more compelling character.

House of the Dragon concludes its first season on an extremely high note. It is more than fair to acknowledge the reality that this season would have worked better with two or three additional episodes given the amount of ground it covered. Ten episodes is an arbitrary number, and the cost is hardly a concern for a flagship HBO offering.

The highs of “The Black Queen” ultimately demonstrate House of the Dragon’s ability to stick the landing. Things may have been rushed, but the show delivered in its efforts to set the stage for the dance. Time will provide a better rubric to evaluate the pacing issues throughout the season, but the show did a fantastic job establishing the stakes of its premise.

House of the Dragon soars above its vacuous source material House of the Dragon may very well be the most expensive television show ever born out of a procrastination project. Largely based on the novella The Princess and the Queen and its prequel The Rogue Prince, published originally in the anthologies Dangerous Women and Rogues respectively, both edited by George R.R. Martin and his late friend Gardner Dozois, the depiction of the Dance of the Dragons was less a fully realized world than a side project by an author hellbent on doing anything other than finishing The Winds of Winter. The repackaging of said novellas along with some other material as Fire and Blood gives the whole project a sense of grandeur that covers up what’s largely a shameless cash grab by Martin’s publisher, understandably thirsty for some new Westeros content.

The main books in A Song of Ice and Fire presented their chapters through varying point-of-view characters, giving the readers an intimate first-hand perspective into the people we’d grown to love and hate, sometimes both. The novellas that make up House of the Dragon were presented through the lens of Archmaester Gyldayn, an elusive unreliable narrator. The execution of the text put a fair bit of distance between such legendary figures in Westerosi lore as Daemon and Aemond Targaryen, and the audience gobbling up these morsels of story. House of the Dragon has far less concrete substance to work with than its predecessor Game of Thrones.

Part of the beauty of Thrones was the show’s need to juggle seemingly countless strands of plot within its ten-episode seasons. Fans scoured the opening credits to see which characters would appear in the episodes, screen time serving as the ultimate limited commodity. House of the Dragon couldn’t be more different, with a limited cast of characters predominantly set in King’s Landing. Without the benefits of Thrones’ frequent changes in scenery, HotD has had to double down on the gritty mechanics of television storytelling to fuel its narrative, wisely sparsely deploying its greatest asset in the realm of spectacle, the titular dragons that prompted HBO to favor this narrative over competing spin-off concepts.

House of the Dragon is less a Game of Thrones spinoff than a Westerosi adaptation of Succession, another HBO crown jewel. Like Succession, HotD features a large family wielding capitalism’s most nepotistic instincts in service to selfish goals no reasonable human being should care about. Television doesn’t need to care about right or wrong. It’s fun to watch attractive bad people doing naughty things. HotD isn’t an existential fight for survival against unthinkable evil like Game of Thrones, but a petty family squabble between people with the fantasy equivalent of nuclear weapons.

Showrunners Ryan Condal and Miguel Sapochnik pulled off an immensely impressive feat with season one. House of the Dragon lacks practically every defining attribute that made its predecessor great, but the steady narrative pacing and first-rate acting allowed the show to succeed on its own merits independent of the broader spectacle. The show managed to get its audience invested in characters even amid a clunky time jump that saw two of its leads, both its princess and its queen, recast midway through the season.

The early first-rate performances by Milly Alcock and Emily Care as Rhaenyra Targaryen and Alicent Hightower might have presented a lot of problems for Emma D’Arcy and Olivia Cooke, tagging in midway through in a confusing narrative with a cast of characters with oddly similar names. House of the Dragon is the rare kind of show where you actually feel for the characters without necessarily needing to identify them all. The legend of Daemon Targaryen manifests itself through Matt Smith’s uncannily minimalistic performance, commanding all the attention in a room with a single smirk.

One doesn’t need to pick a side between the “Greens” and the “Blacks” to feel for the patriarch ushering in his own family’s demise. King Viserys Targaryen slowly withers away over the course of the season, but Paddy Considine delivers every line with the grief of a dying man faced with a horde of relatives who hate each other. It’s surprisingly easy to relate to this collection of selfish incestuous royals and the oligarchs who feed off their scraps.

Unlike its predecessor, the audience can tune into House of the Dragon knowing how all of this is going to end, who’s going to kill who, and who’s going to lose an eye for implying their cousins are bastards. There is a surprising level of dramatic tension for a show without the benefit of natural suspense. HotD is a lot slower than its predecessor, but there’s ample beauty to be found in the ways that the cast manages to bring its meager source material to life. Game of Thrones was a great show based on a great series of books. HotD is a great show based off Martin’s various procrastination musings thoroughly content with their own mediocrity. The latter is unlikely to leave a lasting impression on popular culture, but it might end up being the more impressive piece of work when all of this is said and done.