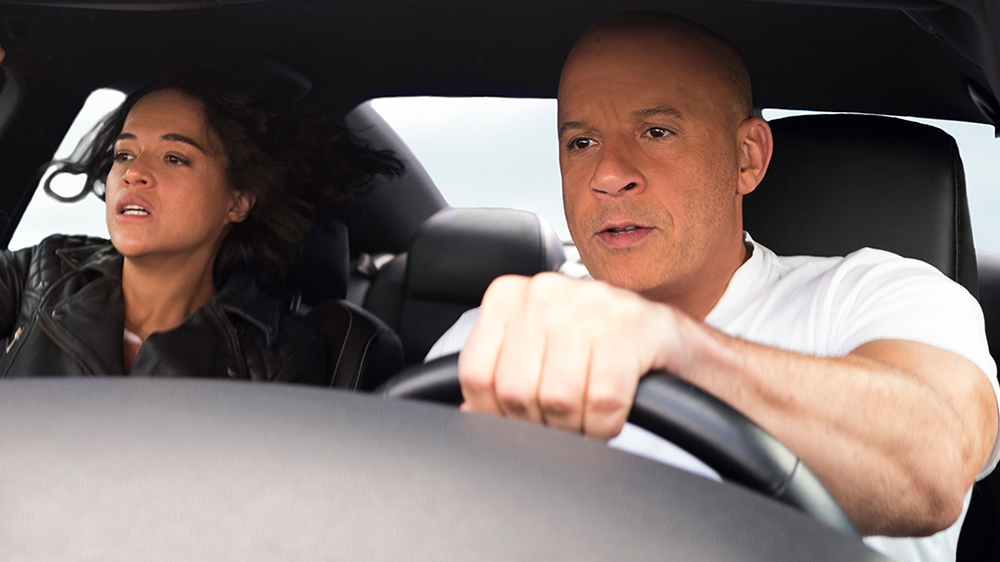 The metamorphosis of the Fast & Furious franchise over the past twenty years is one of the weirdest success stories in Hollywood history. From its humble origins ripping off Point Break, to its more modest ambitions adopting the tone of The Italian Job, to its late-stage embrace of full Mission: Impossible absurdity, Dominic Toretto and co. have put together quite an impressive run in spite of their unambitious, derivative narratives. At this point, a Jurassic Park-crossover feels more inevitable, and natural, than it should. Where else can they go?

As the films get louder and more outlandish, Fast & Furious would have you believe that family is its lodestar. At best, family fulfills the narrative obligations of a James Bond-style mission briefing that explains why the film is happening in the first place. Family has always been a distant, secondary concern to the explosion machine that keeps this whole show going.

With a bloated run-time of 145 minutes, F9 spends way too much time on family. To make matters worse, the series deploys the “long-lost brother” trope, introducing John Cena’s Jakob Toretto into the mix. For a franchise that places such a heavy emphasis on family ties, it’s more than a little weird that the main character would suddenly possess a never-mentioned brother this late in the game.

The plot is pretty boilerplate fare. Dragged out of retirement after the disappearance of Mr. Nobody (Kurt Russell), Dom and his team need to find a device that could hack into any computer-controlled system in the world. Only trouble is that Jakob is also after the device, leading to plenty of predictable family drama, too often expressed through excessively long flashback sequences from when the Toretto boys were teenagers, played by actors who hardly look like convincing younger versions of Diesel and Cena.

As Jakob, Cena does a passable job playing the part of scorned brother. Trouble is that Vin Diesel has never had a ton of range as a performer, working best opposite an actor capable of elevating his talents, such as Paul Walker, Dwayne Johnson, Jason Statham, or Charlize Theron. Cena isn’t a better actor than Diesel.

While previous Fast movies staved off franchise fatigue by injecting either A-list action stars or Academy Award winners into the mix, F9 leaves Diesel too exposed with only Cena to help carry the load. Theron and franchise veteran Helen Mirren make cameo appearances that do little but remind the viewer that the experience would almost certainly benefit from their added involvement.

Director Justin Lin makes a welcome return to the franchise after a two-film absence, having been a major force in transforming the series from its street racing origins to its world-saving ambitions. Lin’s debut entry, the under-loved Tokyo Drift, is well-represented, featuring the returns of many of its principal cast, including Lucas Black, Jason Tobin, and Shad “Bow Wow” Moss.

Of course, the marquee returning player is Han Lue (Sung Kang), who appeared in all four of Lin’s Fast films despite dying in Tokyo Drift, rendering Fasts 4-6 “prequels” to the third entry. The series is no stranger to retconning deaths, having previously brought back deceased Letty Ortiz (Michelle Rodriguez) under dubious circumstances. Han’s return is no less absurd, but Kang isn’t given much to do, squandering one of the series’ best characters.

The supporting trio of Tyrese Gibson, Chris “Ludacris” Bridges, and Nathalie Emmanuel make the most of their limited runtime, at times scraping up against the fourth wall. The return of Lin, Sang, and series original Jordana Brewster (Mia Toretto) gave the series a great chance to reunite the family dynamic that made the fifth and sixth films so much fun, but F9 is too all over the place to bring this all together.

The action pieces are predictably solid, though the franchise struggles to overcome the natural diminishing returns of having seen these characters defy death on so many occasions. Lin’s big problem is the atrocious script and poor pacing. The third act sees totally unnecessary additional flashbacks that step all over the climax. Johnson and Statham look like geniuses for sitting this one out in favor of the much lighter Hobbes & Shaw, amidst some reported tension between Diesel and The Rock.

F9’s narrative shortcomings might have been more forgivable if it wasn’t such a bloated slog. The action sequences can’t cover up how badly this franchise is showing its age. Silly is one thing. Fast & Furious has generally done a good job selling the absurd. F9 is boring, a crime that’s hard to forgive.

f9 fast and the furious 9