The Mimic Is an Entertaining Comedy Powered by Strong Lead Performances 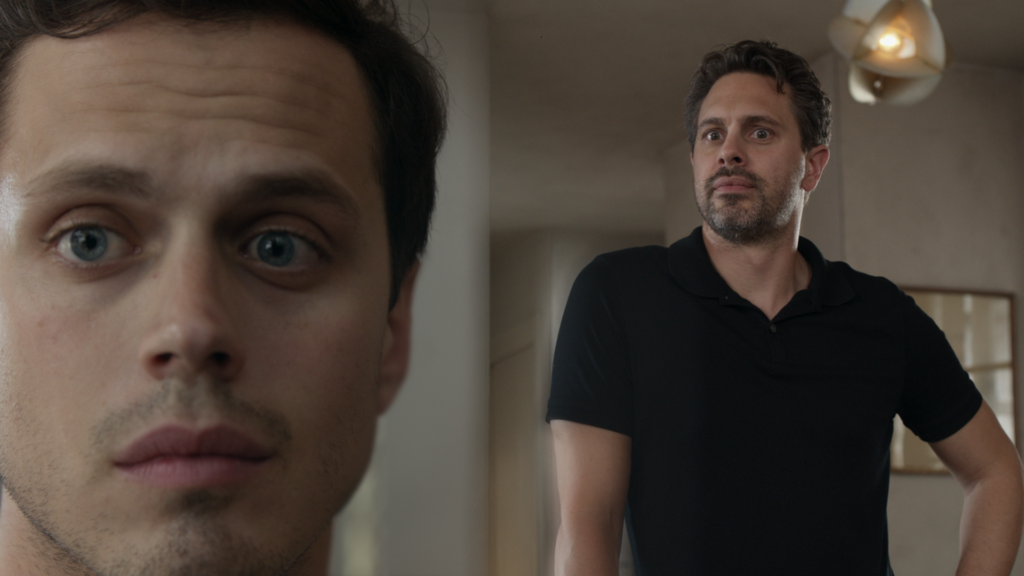 One of the joys of film is the way the medium can shine a light on experiences its audience would never live through in a million years. There are all the horrifying scenarios involving murderers, and all the tedious neighbors you desperately want to avoid out of fear that they might be murderers. Or simply painfully tedious.

The Mimic stakes its territory in the latter camp, a timeless saga of high-strung protagonist forced to deal with an unsavory predicament. The Narrator (Thomas Sadoski) finds his quiet life interrupted by the Kid (Jake Robinson), who he’s worried may be a sociopath. The Kid is a pretty creepy guy, a preppy dresser with a perpetually sly look on his face. For the Narrator, this uncomfortable new presence in his life makes his skin crawl, even if he’s not always 100% sure why.

The bulk of the film relies on the back and forth between the two leads, a non-stop barrage of rapid-fire dialogue. Sadoski and Robinson are delightful to watch, carrying The Mimic with their constant banter. They fight like an old-married couple who can’t decide where to eat, an act that mostly stays amusing throughout the course of the runtime.

Director Thomas F. Mazziotti structures The Mimic almost like vignettes, each scene essentially functioning as a mini-chapter in the Narrator’s life. The sense of pacing works pretty well, keeping things feeling fresh even as familiar patterns play out. There aren’t any subplots, which puts extra-strain on the mileage between Sadoski and Robinson.

The script probably isn’t as funny as it thinks it is, but there’s enough charm to keep things interesting until it’s time to wind things down. Clocking in at just over eighty minutes, The Mimic hardly overstays its welcome, though the act definitely loses a bit of steam down the stretch. When a film relies on one trick, it’s hard to sustain the routine over the course of an entire feature.

As far as overarching messages go, The Mimic offers some interesting food for thought on the nature of individuality. The fast-paced nature of the script leaves little time for introspection, perhaps stepping on its own themes a bit by moving too fast to let the audience soak anything in. The film delivers plenty of laughs with two great lead performances, making it a worthwhile watch for those seeking an unconventional narrative to hold their attention.

« Onward Is a Perfectly Fine Film from a Studio Capable of Better
Star Trek: Picard Is Full of Missed Opportunities »