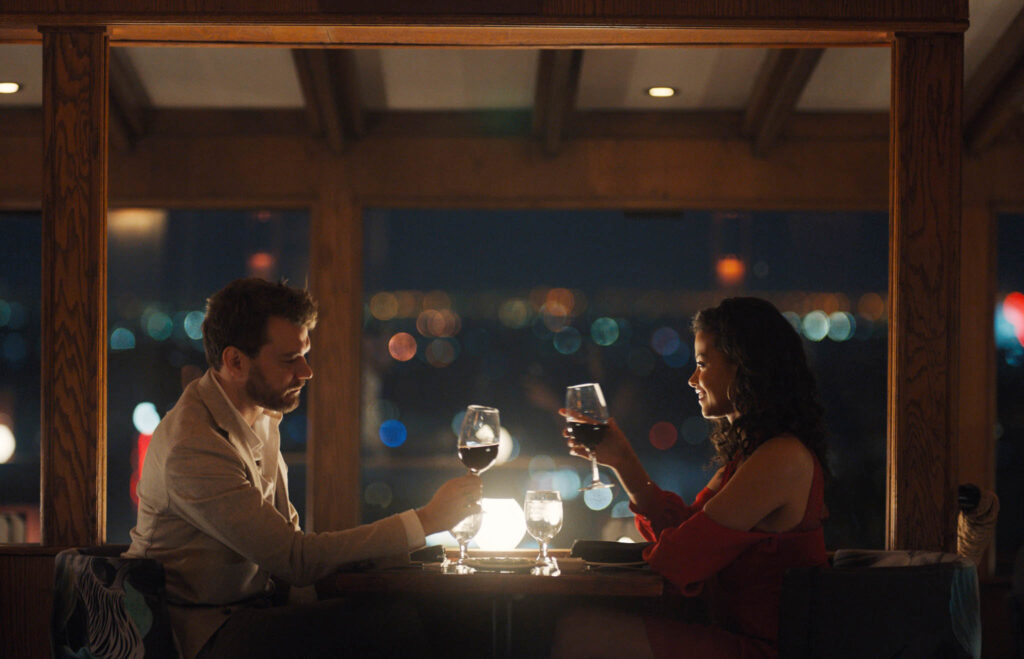 Pilou Asbaek and Ella Balinska appear in Run Sweetheart Run by Shana Feste, an official selection of the Midnight program at the 2020 Sundance Film Festival. Courtesy of Sundance Institute.

To a large extent, it feels a bit reductive to talk about toxic masculinity in the horror genre. Slasher killers are typically men, monsters who brutalize their victims in unseemly matters. That’s not to say that there’s not plenty of sexism displayed in the manner with which women are victimized compared to men, but this territory is messy quite literally by design. Toxic is kind of the point.

Run Sweetheart Run centers its narrative of the agency of women in the horror genre. Shari (Ella Balinska) is a single mother who just wants to enjoy a night out on a blind date set up by her boss. Ethan (Pilou Asbæk) is a wealthy, mildly charming guy looking for a bit of fun. A supernatural figure, Ethan’s idea of a good time involves chasing woman through the night by tracking their scent.

Much of the film plays out like a standard survive-the-night horror thriller. Writer and director Shana Feste plays with power dynamics quite a bit, particularly with Ethan’s ability to control the police, but the narrative is pretty straight-forward. While the dramatic turns feel a bit predictable, the film does a good job staking out its own territory in a well-trodden genre.

Feste flips the script on femininity in horror, unabashedly wielding the female body to her protagonist’s advantage. By Ethan’s design, Shari is bleeding from her wounds but she’s also on her period. Women have been too often guided to feel shame for exposing such realities publicly. Feste sets out to change that conversation.

Balinska does a great job with the material. The genre has a natural trajectory for Shari to follow, but Balinska makes it her own. She doesn’t just want to survive, but to thrive in a world that has tried to force its terms for far too long.

Asbæk has a certain charm that works well as a villain. Ethan is cute, with a weirdly innocent quality about him that’s so obviously fake and yet still alluring. His place in the narrative could be largely perfunctory, but Asbæk makes sure the audience never forgets his smiling face.

Run Sweetheart Run is a little clunky with its transitions. Some of that lies with the predictable nature of suspense building within the genre. Villain and hero must cross paths a few times to keep the tension alive, but Feste struggles with the obligatory nature of this dynamic. She skirts the line of one-trick pony a bit too much, though the trick doesn’t really hinder the narrative.

Backed by an excellent cast and a strong sense of pacing, Run Sweetheart Run is a fresh take on a genre that’s seen it all. Feste offers a lot of commentary on the present age without letting weighty issues bring down the narrative. Shari isn’t the first strong woman we’ve seen in horror, but she’s refreshing in her unabashed celebration of her femininity, blood and all.