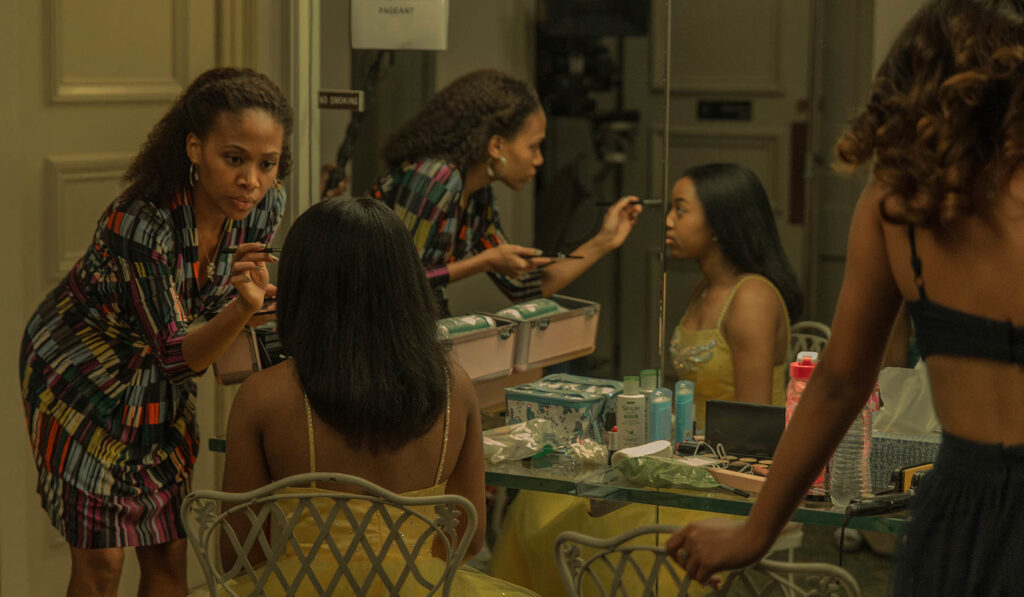 Nicole Beharie and Alexis Chikaeze appear in Miss Juneteenth by Channing Godfrey Peoples, an official selection of the U.S. Dramatic Competition at the 2020 Sundance Film Festival. Courtesy of Sundance Institute

Part of growing up is to understand the relationship between parental expectations and the reality of needing to live one’s own life. Miss Juneteenth understands the need for nuance in portraying this challenging dynamic. Not everyone was born to be a pageant queen, but those truths don’t necessarily need to be accepted by parents who want their children to follow in their footsteps.

Turquoise Jones (Nicole Beharie) is a hard-working single mom. She picks up extra shifts at Wayman’s BBQ & Lounge to help pay the bills, singularly focused on providing a better life for her daughter Kai (Alexis Chikaeze). A former winner of the Miss Juneteenth pageant, which honors the day that Texas slaves learned of their emancipation, Turquoise hopes that the scholarship money awarded to the winner can give Kai an opportunity that she wasn’t able to have for herself.

For Kai, the etiquette training and fancy dresses associated with Miss Juneteenth represent a world she wants nothing to do with. Kai wants to dance. But dance team doesn’t offer the same chances at a scholarship, putting her in a difficult position of trying to appease her mother at the cost of her own passions.

In her feature debut, writer and director Channing Godfrey Peoples presents an intimate family narrative. Miss Juneteenth is a heartwarming film about the nuances of mother/daughter relationships. Kai and Turquoise don’t always see eye to eye, but Peoples constantly keeps the audience guessing with the way she lets the story unfold.

Beharie and Chikaeze are a great mother/daughter pair. The two possess an organic relationship that responds to the needs of the plot without existing in a reactionary capacity. There’s no unnecessary conflict packed in. Peoples uses great restraint in her approach to conflict with excellent sense of pacing.

The script is a little underdeveloped, with numerous subplots that barely get any attention after they’re introduced. There’s a lot of backstory to Turquoise that we don’t get answers to, a puzzling dynamic for the film’s lead character. Peoples keeps the romance to a minimum, which is refreshing, but the events of Turquoise’s own Miss Juneteenth remain unresolved. Peoples does include a fair number of satisfying story arcs. Turquoise’s mother, a God-fearing alcoholic, receives an arc that brings depth to her daughter’s own trajectory.

Peoples keeps expectations for the story fairly measured. Miss Juneteenth isn’t full of surprises, but Peoples is well-versed in the nuances of interpersonal conflict. A beauty pageant shouldn’t be the defining moment in anyone’s life. Of course it is for some, but Peoples ensures that her narrative doesn’t hinge on an arbitrary outcome.

Miss Juneteenth finds meaning in the simple interactions of its characters. Their lives are full of hardships and struggles that would exist no matter what happened in a pageant. A yellow dress may not change the world, but Peoples presents a meaningful slice of life. An excellent debut.