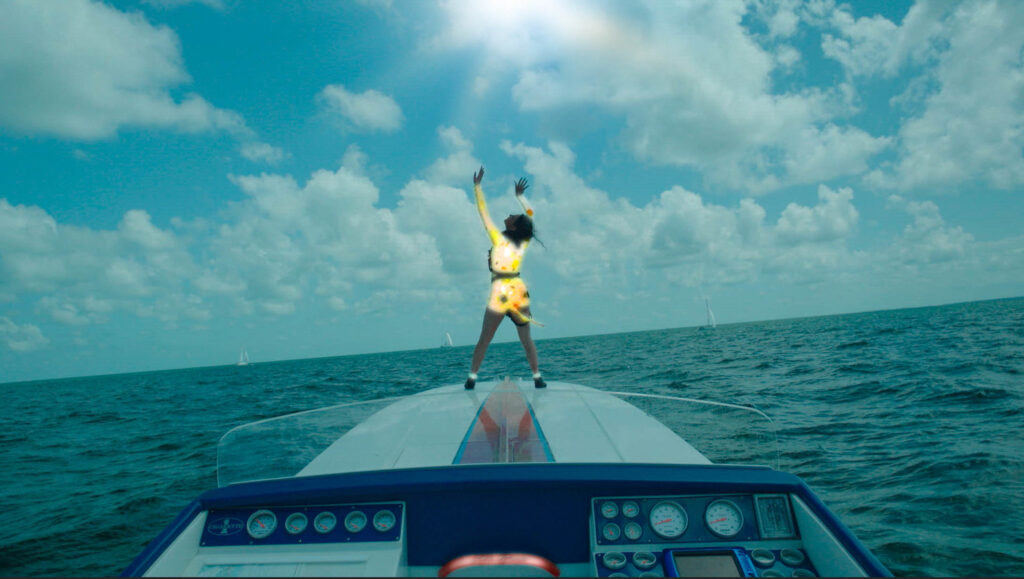 The difficulty of explaining what exactly Omniboat: A Fast Boat Fantasia is about makes perfect sense when you consider how many directors and screenwriters played a part in crafting the narrative. Fifteen filmmakers joined forces to make this strange commentary about Miami, which can sort of be described as a love letter to this city, albeit one filled with practically every emotion imaginable. The film’s desire to overload largely implodes over a bloated runtime.

The film functions mostly as an anthology, with two primary plotlines. Jim Cummings (Mel Rodriguez) is trying to attract investors for his phallic luxury apartment building. The end of the world proves to be a bit of an issue, but Cummings plows ahead, beaming with pride for his city.

The other major plotline follows the lives of a few sentient speedboats. Lay’N Pipe falls in love with a monster truck, leading to baby Lay’N Pipe 2. The film owns its absurdist premise, delivering a lot of laughs as the audience follows the courtship of tacky machines.

Omniboat tries to be everything, an exhausting narrative that’s really fun for about twenty minutes. The rest is borderline unwatchable. The novelty of the film’s unique approach to storytelling results in a few truly hilarious moments, but the high is unsustainable.

Fittingly, Omniboat as a narrative has two speeds, full throttle and completely asleep. The pacing is terrible, particularly in the second act. The energy can’t be sustained, leaving a feeling of sheer exhaustion in its wake.

The film wastes a pretty good ensemble, including comedic actors Adam Pally, Casey Wilson, and Adam Devine. The three are in the film so early that it’s easy to forget they were even there at all by the end, which itself possesses an exciting cameo.

The film is too long by at least forty minutes. Two hours is a ridiculous amount of time for a narrative thinner than a g-string bikini. Worst of all, the flow is so disjointed that you could simply just chop a huge chunk off and no one would notice. To say it meanders would almost be inaccurate because there’s no clear sense of direction established.

Omniboat is a singular kind of film, one without any obvious comparison. At times the energy is quite palpable, the obvious glee of the filmmakers radiating through the screen. Unfortunately it just doesn’t translate into anything an audience can enjoy.

Miami does come alive in the film, perhaps its crowning achievement. Locals may find something redeemable in the way the filmmakers frame the narrative, but even that is kind of a stretch. Omniboat plays like its courting the midnight movie circuit, but the middle is too sleep-inducing for any substantive cult following to develop.

Omniboat can’t buoy anything resembling a cohesive experience. There’s a sense of wonder in the idea that it even exists, but it’s a sad shipwreck of a film. To have started off so strong and sunk so quickly is a real shame. It’s hard to believe that so many talented people came together to deliver such an awful experience.