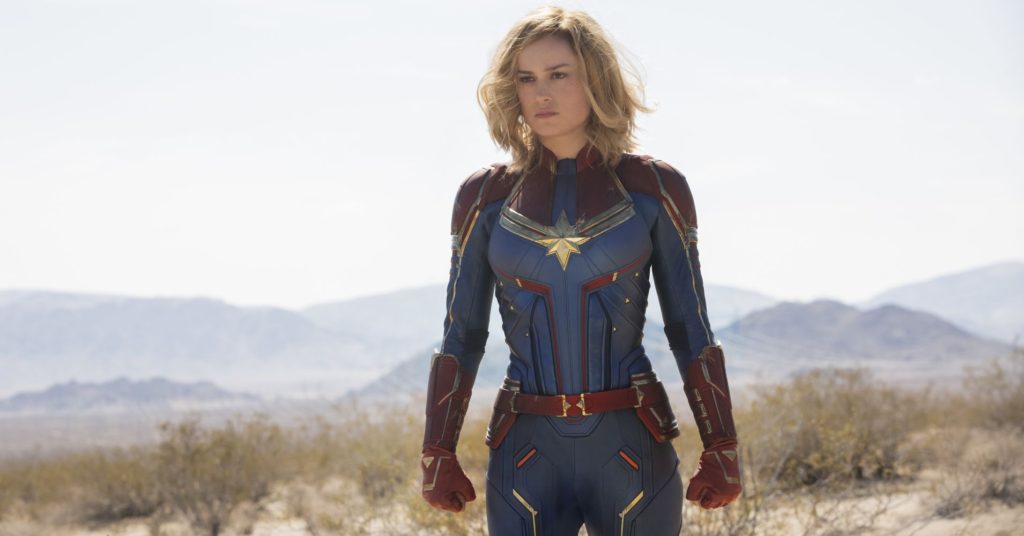 The early entries in the Marvel Cinematic Universe excelled at establishing their characters, relatively independent of any obligations to a larger connected continuity. All of the previous origin narratives across the three phases of this massive saga have allowed their heroes the opportunity to make their own mark on an audience, knowing that the idea of bringing them all together for a big team-up constantly lingers in the background. Investment in these characters is the primary reason behemoth undertakings like Avengers: Infinity War work so well.

Captain Marvel feels oddly rushed for a first-time solo adventure. From the first moments on, the film rarely stops to catch a breath. Lost in the frantic pacing is the idea that Carol Danvers is a person whom the audience might enjoy getting to know along the course of the film’s brisk two-hour run time. Danvers spends much of the film trying to figure out her own past, but the narrative is too all over the place to give any sense of direction to her development as a character.

Brie Larson is totally underutilized in the title role, never really getting a chance to shine, despite her character’s immense powers. There are a few scenes where Larson gets to showcase Danvers’ personality, mostly opposite Samuel L. Jackson, who puts in a predictably solid effort as Nick Fury. The immaculate process of digitally de-aging Fury and longtime MCU stalwart Phil Coulson (Clark Gregg) is more remarkable than most of the lines either character speak throughout the film.

As with many MCU films, there are far too many villains. Jude Law and Ben Mendelsohn each portray complex characters whose potential depth is lost in a narrative that simply doesn’t have time to fully flesh out the conflict between the Skrull and the Kree. The film does little to suggest that Lee Pace and Djimon Hounsou, both reprising their roles from The Guardians of the Galaxy, are there for any reason other than to simply serve as connections to the broader continuity. Lashana Lynch is also underutilized as Maria Rambeau, Danvers’ best friend and the link to her past on earth.

Nostalgia is a powerful force throughout the film, which goes to great lengths to recreate 90s America as well as the feel of the early days of the MCU. As fun as it is to see Danvers crashing into a Blockbuster Video or Coulson interacting with the juggernauts of the franchise after years on Agents of S.H.I.E.L.D., the sense persists that the film is trying too hard to retcon Captain Marvel into its world, as opposed to weaving her in naturally through the force of her as a character. This narrative should be Captain Marvel’s first, and everything else second, but too often it spends its time functioning as a prequel to the Avengers Initiative. Fury’s presence is an asset, but the jumbled mess that is the Kree/Skrull storyline burdens a film that never seems sure of what it wants to be.

Captain Marvel feels less like an origin narrative and more like a placeholder for bigger, better things to come. The audience knows that Danvers is going to play a big factor in Avengers: Endgame, but the prospect of beating up Thanos two months from now doesn’t do much to sell the movie being presented to audiences right now. Future films will be able to focus more on the conflict between the Skrull and the Kree, but how much are we supposed to care? It’s hard to get excited about Captain Marvel leading the Avengers down the road when she’s not even fully trusted to carry her own movie.

The action scenes are mostly duds, poorly framed and constantly set against bland color palettes. There are bits of humor here and there, but there isn’t enough dramatic tension for the jokes to really land. Like Thor, Captain Marvel’s sheer strength makes it a bit harder to craft compelling fight sequences, but it doesn’t feel like any effort was made to put anything on screen that the audience might remember a week later.

The MCU has very few misfires, but this one simply didn’t come together despite following the same general formula the franchise has deployed for most of its other films. Thoroughly unremarkable, Captain Marvel wanders aimlessly through various half-baked plotlines without ever investing in its title character. For a film set in the past with its eyes on the future of the franchise, for some reason, it never seemed capable of living in its own present.