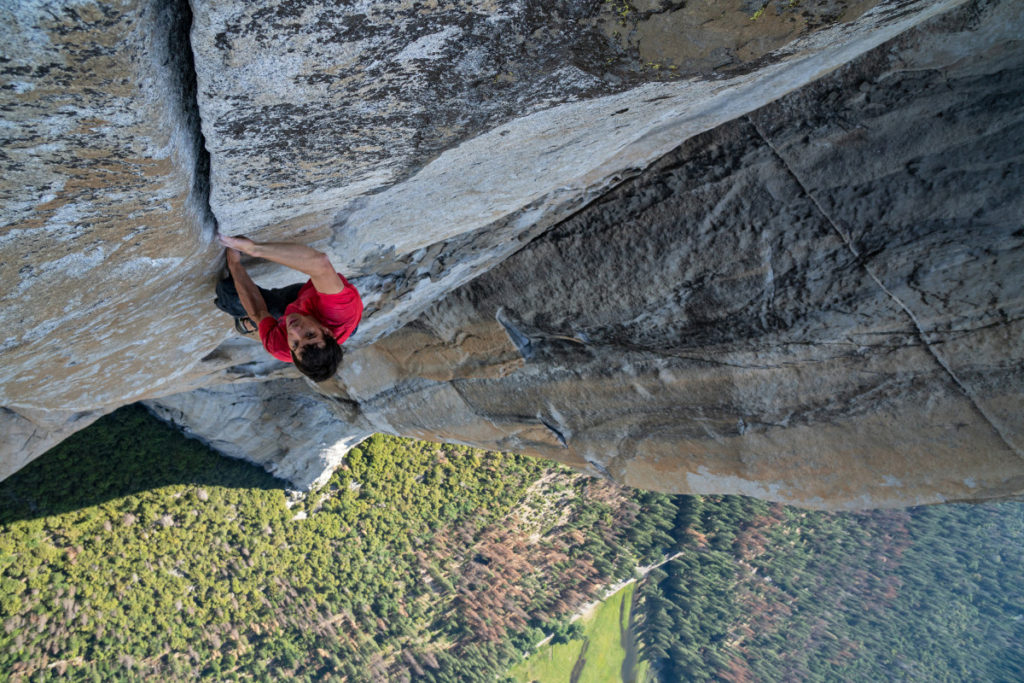 A documentary about an athlete like Alex Honnold faces an inevitable, and somewhat unattainable, objective beyond its purpose as a film. The question of why anyone would ever free solo when the stakes are literally life and death persists long after the audience is forced to accept the idea that there isn’t going to be a satisfying answer. Fortunately, Free Solo found plenty of alternative courses that depict its subject in a way that effectively circumvents the core of the mystique.

Honnold has been making headlines for a little over a decade for his free solo feats, rock climbing without a rope, but Free Solo sets its sights on a more intimate scope. The buildup to Honnold’s climb of Yosemite Valley’s El Captain, to be the first person to free solo the immensely difficult formation, gives the film a sense of purpose beyond a mere biopic. Directors Elizabeth Chai Vasarhelyi and Jimmy Chin cover many aspects of Honnold’s life, but the film constantly returns to El Captain, allowing the historic nature of the achievement to serve as a placeholder for any notion that the audience might begin to understand why anyone would want to embark on such a perilous adventure.

Free soloing is not without its detractors, who worry that climbers like Honnold are not only recklessly risking their own lives, but also inspiring others to do the same. The film never paints Honnold as a hero or a role model, despite the obvious cozy relationship the directors enjoyed with their subject. Honnold is immensely likable, an awkward individual without an ego one might expect from his stature, but he’s also clearly not someone meant to be emulated. He’s a singular force of nature, one whose predecessors in the field of free soloing have pretty much all met grim fates. Free Solo manages to celebrate his career while constantly flashing big “don’t try this at home” warnings to the audience, best illustrated through a montage of deceased free solo climbers who lost their lives in pursuit of their passions.

The directors do an excellent job explaining the fundamentals of rock climbing to the audience, as well as the particulars that make El Captain such a monstrous wonder. Capturing Honnold’s climb in progress was an impressive feat itself. Featuring the crew in supporting roles allowed Free Solo to give an added sense of gravity to the journey, as it’s clear that all care about Alex on a deeper level than their obligations as filmmakers.

The film dedicates a large portion of its runtime to Honnold’s love life, which was deliberately presented as nonexistent in one of the first scenes but gradually blossoms over the course of the narrative. Honnold’s girlfriend Sanni McCandless is put in an unusual position for a documentary, in many ways functioning as the film’s antagonist by token of her understandable apprehension toward free soloing. The complexities of their relationship give Free Solo a sense of personal depth that might otherwise be missing, as Honnold is less than forthcoming about the motives behind his wildlife.

At times, their relationship does appear to be used as a plot point, exacerbated by the fact that they started dating after the narrative began. McCandless’ reservations are also contrasted by Honnold’s mother, who takes a completely non-interventionist approach to his free soloing. As the film progresses, it’s clear that her feelings serve as a suitable conduit for the larger issue of why anyone without an apparent death wish would keep attempting such dangerous feats. Honnold seems unbothered by the sentiment, even as he ages and adds more real-world stakes to his life. After a while, the film does an effective job convincing the audience that such motives need not be explained.

Free Solo captures one of the greatest athletic feats in history while never losing sight of its much more human subject. There is a lot to admire in Alex Honnold’s achievements. He makes for a fascinating film subject, a kindhearted man who has dedicated his life to his dreams. There is a real-world danger in idolizing his career, as free soloing often leads to perilous results. Directors Chai Vasarhelyi and Chin crafted their film responsibly, showcasing Honnold’s superhuman talents while making clear that admirers should not leave the film hell-bent on free climbing up the first large object they see.

Today we are joined by Heather Reid, cofounder of the iconic 90s duo The Murmurs. Heather talks about her impressive career and life as a lesbian in an era far less receptive to LGBTQ rights. Heather also talks about her recent projects, including a new single “Right Here Right Now,” and the musical she’s currently working on. A must-listen for 90s rock fans.

Be sure to check out Heather’s new video for “Right Here Right Now” https://www.youtube.com/watch?v=BY6nVP6KZIE