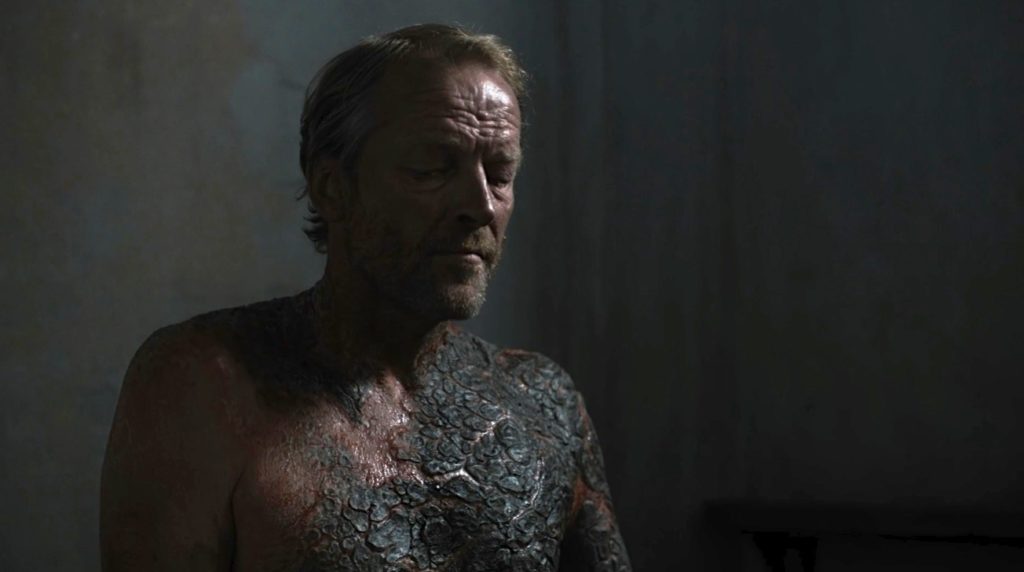 One of the great triumphs of the #MeToo movement has been the way it’s helping to change the way we look at what constitutes acceptable male behavior. Society has offered a lot of excuses for the persistent man who won’t take no for an answer, forgetting that there is a woman forced into the position of not being able to have her wishes accepted for the answer. “No means no,” somehow gets clouded when a man’s hurt feelings garner enough sympathy to seek shelter somewhere in the “boys will be boys” trope.

Ser Jorah of House Mormont is a bad man.

He sold slaves on Bear Island in a feeble attempt to make his wife happy living in a place he would have known would make her miserable if he had ever stopped to consider her feelings before taking her away from Oldtown. He ran away to Essos to escape justice for his crimes. He tried to sell out Daenerys in a similarly pathetic attempt to be allowed back home.

Ser Jorah of House Mormont is a pervert.

Daenerys is a teenager at the start of the series, in both the books and the show. The show aged her up a bit from thirteen to make sexualizing her a bit less creepy, but the idea that an older man/sworn protector would court her should still make one uncomfortable. Despite this, Jorah presses on, only to be politely rebuffed by Dany time and time again. The power dynamic is a mess, but Ser Jorah doesn’t care. Ser Jorah only cares about himself.

Ser Jorah of House Mormont is a disgrace.

When Daenerys learned of Ser Jorah’s treachery, she banished him. Many would have executed him for treason, but Dany took mercy on her disloyal advisor. You might think he’d take her kindness and leave her alone. Dany gave Jorah countless verbal cues to leave her presence and never return.

Ser Jorah of House Mormont only cares about himself.

Moving on is a key aspect of the human experience. We all face rejection at some point in our lives. Ser Jorah experienced plenty of his own, but he never learned to accept that another person might not want him in their life. He portrayed himself as a man who would do anything to earn Dany’s forgiveness, but this mentality is a disguise for his true intentions. It’s never about what Dany wants, only about how Jorah wants Dany to make him feel.

Upon delivering Tyrion to Dany, Jorah found himself banished again. No amount of rejections would matter to Ser Jorah, because Ser Jorah cannot process rejection. It’s only ever about him, what he wants, on his own terms. “No means no, unless I don’t want it to,” is the motto of Ser Jorah, even after he contracts an infectious disease. Not even greyscale can keep Ser Jorah away from the pursuit of a woman who had rejected him many times. No amount of rejection could ever be enough for him.

Ser Jorah of House Mormont does not care about service.

What drives Ser Jorah’s many comebacks? He frames the narrative as a chance for redemption, but such a situation would require Jorah to let go of something he cannot give up: control. Jorah only accepts others on his own terms. Dany is not a Queen to him, no Khaleesi to his greyscaled soul. To him, she is the woman who politely refused his offer of a drink at the bar. He cannot accept any outcome that doesn’t console his bruised ego.

Those of you who have followed my Game of Thrones recaps over the years know that I have not been a fan of Ser Jorah for a long time. I think he’s beyond creepy and should have been killed off a long time ago. As I think more and more about what I want out of season eight, I realize that my biggest wish is one that should have been granted already. I want Jorah off the show.

Jorah’s story is not an important story. You might be inclined to disagree, perhaps because you like him, or just because you don’t view this as an objective truth. One of Game of Thrones’ greatest strengths is that its ensemble cast has many different narratives. Supporting characters live fully fleshed out lives, with goals that can exist independent from their leads.

The depth of GOT’s narrative complexities means that protagonists like Jon and Dany can have goals that conflict with each other. Jorah can certainly desire Dany even if she doesn’t want him back. A viewer doesn’t have to view him as an antagonist just because he won’t take no for an answer.

Trouble is, Dany’s story isn’t allowed to exist without him. Even when she turns him away, he always comes back. This woman cannot live her life independently of a man she politely rejected many times. Too many women in the real world know this feeling all too well.

Jorah’s narrative is full of empty redemption. He seeks forgiveness only under his own terms. The greatest gift he could have given Dany was to not return to Meereen. The books may be able to alter course from Game of Thrones by killing him off in the Battle of Fire, but the show has let his stain linger for far too long already.

No means no. That means you too, Ser Jorah. We all heard Dany loud and clear the first a hundred times. All of us, except you and every other man who felt he was owed something from a woman who rejected him. Do Westeros a favor and go away.