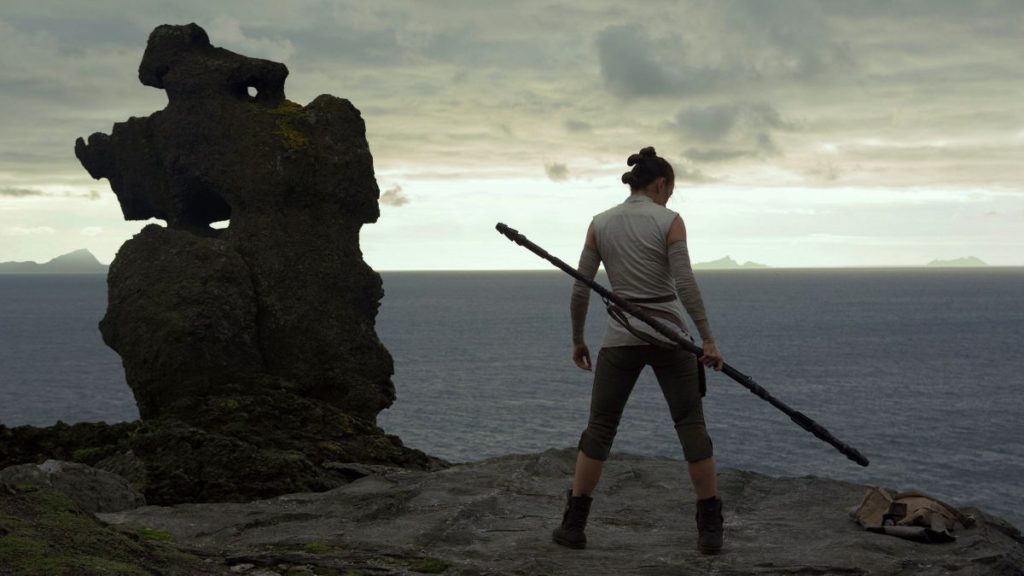 Note: This review does not contain spoilers

There’s one line in the film, “Let the past die,” that defines The Last Jedi’s internal struggle. One could look at that as a fairly ironic utterance considering The Force Awakens was essentially a remake of A New Hope and that Disney’s Star Wars seems quite poised to never die, but there is a sense of truth in this character’s statement. As the franchise tries to figure out its identity in a post-George Lucas world, Star Wars may look to its roots for narrative inspiration, but it isn’t quite sure what course to plot for its characters.

The Last Jedi does not have much of a plot. Without diving into too much detail, the main conflict between The Resistance and The First Order bears more resemblance to O.J. Simpson’s slow-speed car chase than the asteroid field that Han & friends had to navigate through in Empire Strikes Back. Rey’s visit to Luke’s island Dagobah fairs much better, but there’s still lingering questions as to what exactly happened to the world post-Yub Nub that is never really answered.

I initially faced pushback for being critical of The Force Awakens’ lack of plot explanation from people who suggested that the film already bore the unenviable task of “resetting” the franchise after the prequels, and couldn’t be bogged down with too much exposition. Supreme Leader Snoke can be added to the list of things that are literally never explained. The audience is never once told who this man is or how he came into power, and yet the film goes on as if viewers should be expected to fear a villain who serves as little more than a cardboard cutout version of Emperor Palpatine.

Darth Vader is one of the most menacing villains in cinematic history. While Emperor Palpatine’s Machiavellian mechanics were largely saved for the prequels, Return of the Jedi Palpatine had the luxury of existing in a Star Wars world where the Empire was the only “big bad” in town. The Last Jedi is the eighth movie in the main series and yet it doesn’t really have a single compelling villain. Kylo Ren is neither scary nor convincingly evil, Captain Phasma is the most useless character in the new trilogy, and Snoke is barely anything at all.

Part of the problem is that The Last Jedi has a lot of characters, but it never really seems all that concerned about doing anything with any of them. Original trilogy characters are used as little more than window dressings, which I’d be more okay with if this new trilogy had big plans for its new leads. Director Rian Johnson has commented publicly on how this is Rey’s hero story, not Luke’s, but this trilogy has never really been able to answer the question of what this story is supposed to be. The basic questions that some people don’t think need to be answered in The Force Awakens carry a lot more weight if this next film is the conclusion of this newer story. It seems very possible that this new incarnation of Star Wars could end before the audience was ever given a reason to care. We live in a world where big franchises are always playing for the next movie. The Last Jedi forgets to live in the present.

Audience members may identify more with the suave Han Solo or the powerful Leia Organa more than the whiny kid from Tatooine, but the original Star Wars trilogy belongs to Luke Skywalker. This new trilogy does not make Rey the focal point in quite the same way, but its reluctance to commit to its new heroes forces one to question how old icons like Luke and Leia were deployed to serve the film’s purpose. Carrie Fisher delivers an emotionally satisfying send-off in her final role, but Luke’s place in all of this is still treated in a fashion that “it’s not his story” never really satisfies. Some people waited thirty years to see this character on a screen again. Rian Johnson tosses this notion aside without fully considering how fans might react in the absence of an alternative nucleus.

As someone who grew up a Star Wars fanatic, who bought a Sega 32X just to play Star Wars Arcade and wrote poetry about Chewbacca not getting a medal after the Battle of Yavin, I’m increasingly okay with the fact that this Disney version of Star Wars isn’t ever going to be the thing fans spent decades speculating about. Rogue One served as the benchmark for how to enjoy a movie in a franchise I used to obsess about. I won’t be buying the expanded universe novels, or eulogizing them should Disney ever decide to retcon them again. These are movies. Sometimes, that’s enough.

Despite this fairly harsh assessment, I did enjoy The Last Jedi. I had fun sitting in a movie theatre for two and a half hours while some explosions happened and some people did some things, a low bar that Star Wars can’t help but hit. When Solo: A Star Wars Movie comes out, I’ll go and see it. I’ll write my review, if only to reflect on the time in my life when this franchise meant something to me. I’m not the person who needed every single incarnation of Han Solo action figure and Star Wars isn’t the franchise that spurs debate over the ethics of blowing up the second Death Star. The person in me who still puts Boba Fett in my mother’s terrarium can still enjoy the franchise that still has a place for R2-D2. I like that there are new Star Wars movies being told, even if I’ll spend my review point out the very legitimate issues. As C-3PO might say, wonderful!