Getting Rid of the Star Wars Expanded Universe Sort of Matters 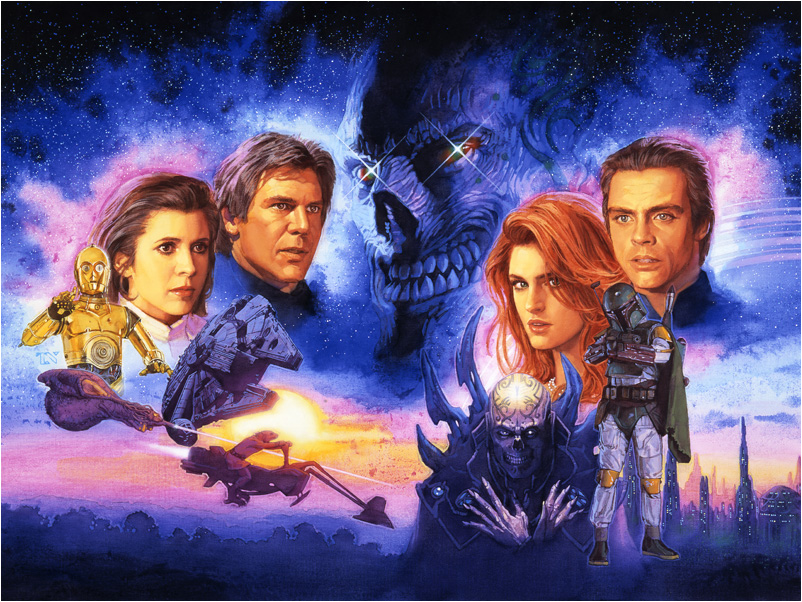 Ever since it was announced that Disney would purchase Lucasfilm in 2012 with the intention of creating more Star Wars films, it was only a matter of time before something drastic changed within the Star Wars canon. The Star Wars Expanded Universe has played a big role in the lasting popularity of the franchise and is far more beloved to many fans than the prequel trilogy or the Clone Wars TV series. When Disney announced in late April that the EU would be rebooted in conjunction with the seventh film’s release in 2015, reception was expectedly mixed.

Timothy Zahn’s Grand Admiral Thrawn Trilogy is widely considered to be the EU’s finest work and was the catalyst that gave credibility to the medium. Since then, there have been well over a hundred entries into the EU with varying degrees of popularity. In addition to Zahn, writers like R.A. Salvatore and Michael A. Stackpole contributed noteworthy works that kept the EU’s popularity up in the time since Heir to the Empire made the New York Times’ Bestseller List. .

The fact that there were hundreds of entries into the EU perfectly highlights the main reason why something needed to happen. Lucasbooks has taken its own continuity very seriously, employing fact checkers well versed in the canon to help writers with their own entries. Outside of those fact checkers, I can’t imagine there are that many who possess a full spectrum of knowledge on all of these books. There’s no reason to expect future films to adhere to continuity so strict that no one would be able to catch deviations in the first place.

More importantly, the popularity of the EU has been on the decline for over a decade now. The New Jedi Order series began with the killing of Chewbacca in an odd matter that’s even confusing to explain coming from someone who actually read Vector Prime. That started a sequence of events that lead to the killing off of many of the EU’s most cherished characters including Anakin Solo, Mara Jade, and finally Jacen Solo who turned into a Sith Lord in a manner that served to emulate his grandfather’s decline.

The EU had nowhere left to go and with dozens of entries that were widely panned, it didn’t made sense to keep that timeline in the fold. Comic books do this all the time. Rebooting the EU might be frustrating, but it needed to happen.

It didn’t need to happen in a way that erased the entire universe though. We don’t know many of the details surrounding the seventh film, but it’s safe to say that Mara Jade and the Solo children will not be in it. Chewbacca is alive again, but the message was sent that the EU no longer matters moving forward. That could be a mistake.

The EU worked. More importantly, the prequel trilogy didn’t work. It’s one thing to reboot what happened, but by going in a completely different direction, Disney is failing to capitalize on what could’ve been a smart goodwill gesture to the fans. Choosing to ignore it completely disregards the fact that the EU kept the franchise alive at a time when nothing else was going on.

If Star Wars: VII is a bomb, you can bet that people will point the finger at the decision to ignore plotlines which were readily available and proven to be more successful than Jar Jar Binks and the midichlorians. As they should. Only time will tell us the full extent of the ramifications of flushing the EU away like Taco Bell twenty minutes after it’s been eaten.

I don’t mourn the loss of the EU. Rebooting the series to a time where the Yuuhan Vong and Darth Caedus never happened is fine by me. The EU gave fans more than twenty years of material to read. Anyone who has gone through all of that material is probably ready for some new books to read. Whether or not that’s the new Star Wars books is up to them.

J.J. Abrams’ new film will face a ton of scrutiny. The idea that there could be a new Star Wars film every year for the rest of eternity all but guarantees that somewhere down the road there will be a valid reason to bash the series. Rebooting the EU isn’t necessarily one of them, but wiping away so many cherished storylines and characters isn’t a great idea either.

« Netflix’ Derek Continues to Be TV’s Oddest Offering
Dunkin Donuts’ Blueberry Cobbler is Delicious, but Bad at Being a Donut »