Dunkin Donuts’ Blueberry Cobbler is Delicious, but Bad at Being a Donut 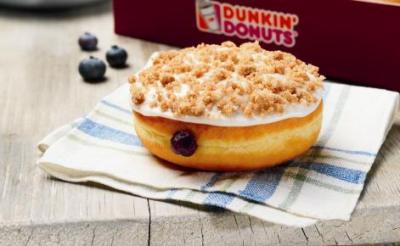 Dunkin Donuts has made some questionable decisions over the past few years. It’s understandable that the company would want to expand into the sandwich market as there’s clearly a demand for it, but products like the Eggs Benedict Sandwich (complete will Hollandaise flavor) and the Tuna Salad on a Croissant don’t seem like the kind of things Fred the Baker would’ve gotten up extra early to make. The rapid fluctuating lunch menu suggests that there are some growing pains with that whole plan.

Dunkin still excels at their two main areas of interest. The coffee and donuts are consistently good provided you don’t order them at 11 o’clock at night. The donuts might be freeze-dried, but alas, these are things I simply cannot care about.

Every now and then, Dunks decides to tamper with its donut lineup. Most of the time, these new creations are about as short lived as AfterMASH, Qwikster, or a Kardashian marriage, but you’ve got to give them credit for trying. I’ll give them more credit for the new blueberry cobbler donut.

Donuts are versatile pastries. They can be breakfast, dessert, or a snack. The problem with the blueberry cobbler donut is that is tastes too good. It’s overloading and excessive, even though it’s a fine balance of donut, filling, frosting, and streusel. It won and yet it lost.

The blueberry cobbler donut should strictly be viewed as a dessert item for fear of inducing a food coma. You can’t possibly expect to be productive after consuming it. The same cannot be said for a chocolate frosted, glazed, or even a jelly donut. The donut sugar rush is supposed to aid you, but this isn’t a rush. It’s an avalanche.

Which presents the question, what good is this donut? It tastes great, but it’s a dessert served at a place you don’t go to for dessert. Going to Dunkin after dinner is a surefire way to get a subpar donut. If it was served at ice cream parlors, that’s one thing. But the blueberry cobbler donut is served at a coffee shop.

This donut is a treat without a function. It might taste better than the other donuts, but you wouldn’t pick it over them. Those other donuts know how to be donuts. The blueberry cobbler donut doesn’t.

A bakery might want to adapt this concept into a pastry people might bring to dinner parties. People don’t bring Dunkin Donuts to dinner parties though. Dunkin Donuts doesn’t serve cannolis, cakes, and pies for a reason. People don’t go to Dunks to be overwhelmed by pastries. Ambition doesn’t always lead to success, even if everything goes right. Such is the tragedy of the blueberry cobbler donut.