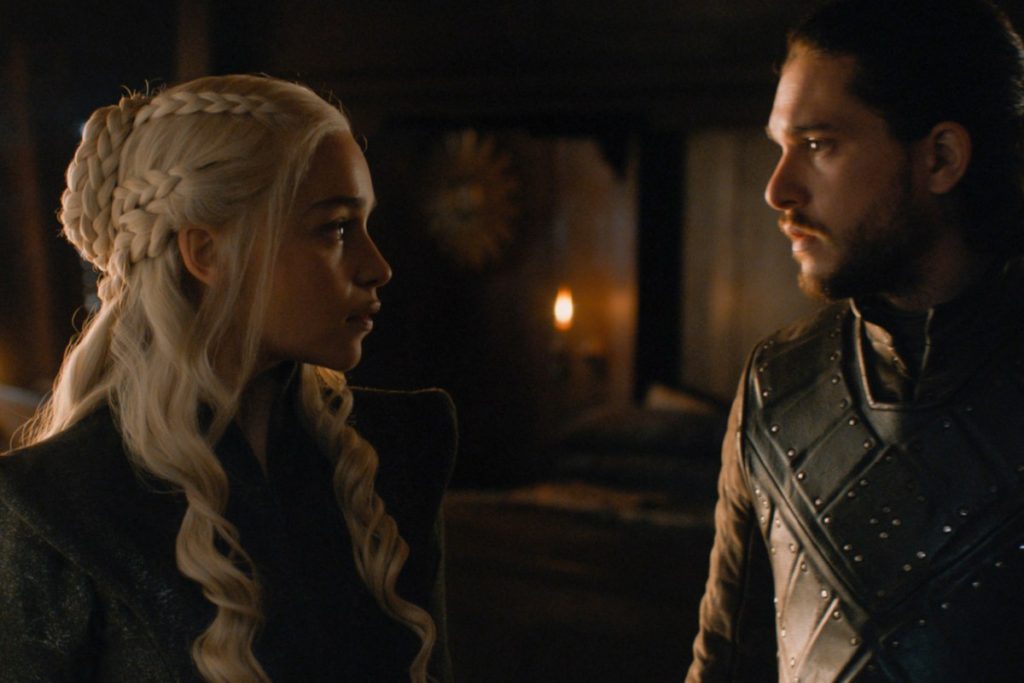 Of the Seven Kingdoms in Westeros, four have unclear leadership. We don’t really know who controls The Stormlands, the Reach, Dorne, and the Riverlands. We’re not even really sure who controls the Westerlands, given that the Unsullied took Casterly Rock and it isn’t quite clear whether Jaime or Cersei sit at the head of House Lannister (Cersei as Queen technically would not, if you go by how the Baratheons handled Storm’s End, but Jaime riding off on his own suggests he’s not really head either). While Littlefinger and knights of the Vale were prominent figures this season, we haven’t seen Lord Sweetrobin on screen since season five.

I mention this because Cersei’s sole condition for agreeing to the truce was that Jon needed to stay neutral in her fight against Dany once the ice zombies are all dead. This, coupled with the hiring of the Golden Company and their 20,000 men (plus elephants), signals that Cersei is pretty worried about the size of her army. The problem is that the North has been in continuous conflict since season one. Their army is spent. Cersei should not be worried about Jon. He really isn’t that important in any context other than the one where he’s a main character. A much better strategy would be to try and placate the Vale, something that Cersei already once did successfully during the War of the Five Kings and then to try and recruit former Tyrell/Martell/Tully/Baratheon bannermen in the regions. If there’s a million people in King’s Landing alone, there must be more troops. We’ve neither seen nor heard any conflicting evidence that would suggest these armies are gone.

We saw a similar lapse in judgment on Dany/Jon’s side of the equation. We had no reason to believe that they thought Euron didn’t actually abandon Cersei. That wouldn’t even really be that important, as long as his fleet wasn’t actually in King’s Landing. Jon and Dany sat around the dragon pit worrying about their failed plan without really ever considering attacking their very vulnerable opponent.

This episode’s meeting wasn’t about logic. It was the single largest gathering of major players since Robert Baratheon and his attaché marched north to recruit Ned to become Hand in the first episode of the series. The show knew the gravity of this moment, giving it half the episode.

The idea of expectations for such a meeting is fundamentally problematic. We weren’t going to get some Red Wedding style twist, not with six episodes left in the series. Instead, we got a bunch of reunions. Tyrion/Cersei, Tyrion/Bronn/Podrick, Brienne/Jaime, Hound/Brienne, Hound/Mountain, Euron/Reek, and Varys/all the people he screwed. That was essentially the only way that scene could deliver. There was no realistic way to live up to all the years of hype.

It hit its mark. It was fun television. The unveiling of the wight was a little over the top theatrical, with the Hound carrying it in on his back and Jon/Davos performing some kind of fire trick like magicians at a children’s birthday party. The plan worked and that felt kind of odd because the plan was stupid, but that was never the point.

This season’s biggest fault is that it has focuses way too much on where it wants to go and not enough time on how to get there. The Night King needed a dragon to melt the wall. The showrunners needed to get all the major players to King’s Landing for a meeting. So that moronic plan was hatched. And yet I can’t deny I was enjoying myself, sitting there watching a television show. We don’t want that to be enough since this is the kind of show where people log onto the internet after each episode to share their thoughts. Sometimes, it is enough.

The resolution of the Littlefinger plotline functioned in very much the same way. The master planner is dead because of a half baked scheme to plot sister against sister mostly hinging on an old letter that Sansa clearly wrote under duress. This doesn’t make much sense, but Littlefinger had outstayed his welcome on the show. So he died. For some reason.

Bran ex machine is tricky. The show could have done a better job of explaining how Bran knows absolutely everything, selectively. Sam bringing up the annulment right there during the R + L = J reveal was way too convenient. Bran is a problematic character in general, but the show isn’t even trying to explain how he chooses to dump his omniscient thoughts onto the characters. It forces the viewer to do the show’s work for it, taking joy in Littlefinger’s death without wondering how exactly that “trial” came to be set up.

This episode loved keeping its characters in the dark in favor of a dramatic reveal for the audience. It was fun to watch Jon tell Cersei he had pledged to Dany much to the surprise of his advisors. Euron’s dramatic exit was great, even though Cersei didn’t tell Jaime or seemingly any other advisor that he hadn’t actually abandoned them. Bran telling Ser Piggy about Jon was fun even though it makes no sense that he hasn’t told his sisters, or Jon himself. These are fun moments, if you don’t stop to think about them.

Reek continues to be the worst part of this show. He didn’t mention freeing Yara to anyone in King’s Landing, waiting until they were back on Dragonstone before whining to Jon. There’s been a Reek redemption cycle for a few seasons now. The whole forgiveness thing for his Stark betrayal was supposed to be settled when he resucued Sansa. Apparently not. It’s boring. He’s horrible. Please kill him.

I feel obliged to mention the Jon/Dany romance. I actually kind of forgot about it. It’s pretty forgettable. Putting the incest aside, the two have horrible chemistry. I’m sure this is partially due to the fact that Khal Drogo/Ygritte/Daario all played the pursuing role in their courtship of these two, but it also just seems rushed and inevitable.

Where is Gendry? Did he collapse from his marathon sprint back to the Wall? Or did the others make him row back from Eastwatch?

The Wall crumbles. I guess that capturing that wight was worth it… I hope Beric and Tormund survived. I imagine they did. Looks like show is going to deal with the ice zombies before the game of thrones is fully settled. Or maybe they’ll wrap up at same time.

Overall this was a good episode despite its shortcomings. It had to set the table for season seven. It accomplished that goal.

That’s it for this week, but we’re not quite done with the season just yet. I’ll post the season in review with the return of character letter grades sometime next week. Thanks for reading.