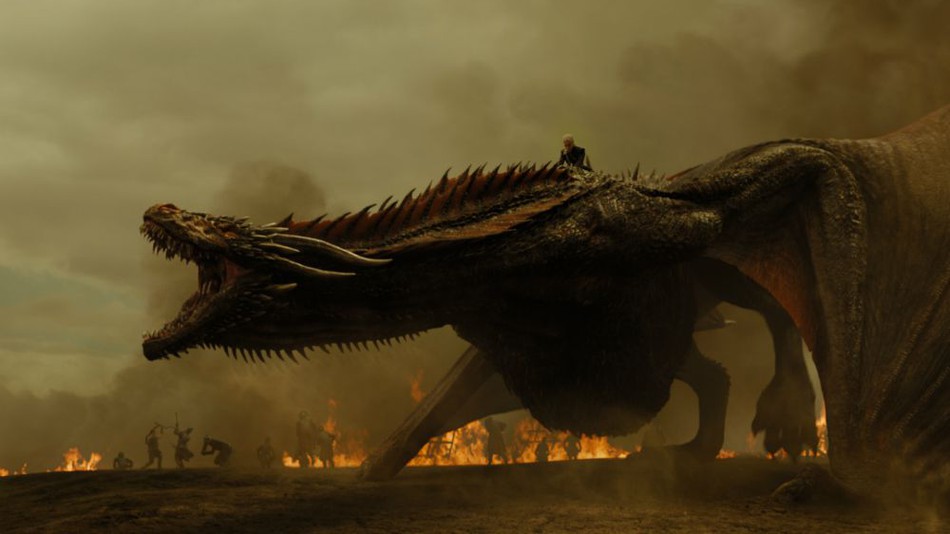 Note to readers: Don’t go into battle against a dragon. Not even if you have a giant crossbow, that can apparently be manned by one person. Definitely not a good idea.

So Highgarden is up for grabs? It’s almost as if it isn’t the seat of an ancient ruling house in Westeros. Granted, the Tarly’s now control the Reach, which should be in good hands now that Sam’s baby brother Dickon is around. Hopefully he doesn’t get burned to death too soon. Could be the next Lyanna Mormont!

The book fan in me wants to go and on about the debt repayment. It was way too easy. You don’t erase twenty years of heavy spending with a single plunder. The Crown’s debt is a far more interesting plotline in the books as Littlefinger is a likely saboteur with his lending schemes. The show has been hinting about debt for ages, but it’s hardly compelling television. With nine episodes left, pushing it aside does make some sense. I’m not really quite sure what role the Iron Bank needs to play in the rest of the series, but Tycho Nestoris is fun to watch and it gives Cersei something to do besides torture people.

The show is handling Bran fairly well. I imagine the writers would prefer not have a deus ex machina ever knowing character around to annoy everyone with hidden knowledge of literally everything. This episode did a good job of dancing around that fact.

Meera was wrong to state that her brother Jojen died for Bran. Jojen actually died so the actor could film the movie series The Maze Runner. Maybe that’s why Bran was so nonchalant about her leaving. Let’s all shed one more tear for Hodor, or a hundred.

Meera is leaving Winterfell to return to her father, whose role in the show has been heavily downplayed. Howland Reed (Ned’s BFF) is the only living person, besides Bran/Yoda (if he’s alive), who knows Jon’s true parentage. I’m not sure how much the show cares about this little detail, but something to watch out for.

The reintroduction of the Valyrian steel dagger could go a lot of ways, most involving Littlefinger’s demise. The mystery of who ordered the assassin to try and kill Bran has never really been solved in either the books or the show, even though Littlefinger was correct to note that the action basically started the whole war. In the books, Littlefinger does lie about losing the dagger to Tyrion, but both Tyrion and Jaime independently deduce that Joffrey is the likely culprit, in a sick effort to impress Robert. I’m not sure if Joffrey will be identified in the show too, or what that would add to the narrative. I also liked how the books didn’t feel the need to tie up that loose end. Let’s hope the show doesn’t make too much of a big deal about a detail I’m sure most casual fans forgot about.

Arya is back in Winterfell. Sansa is in no rush to tell her that Bran is back, or that Rickon is dead, or that cousin Sweetrobin saved them all before suddenly disappearing. Their reunion was way better than Sansa and Bran’s, or any scene involving Bran, though we still don’t know the mystery of who made Ned’s Winterfell statue. Probably Ramsey. Really aren’t that many other options.

Brienne is still around. We finally learned why. It wasn’t to protect Sansa or to have a relationship with Tormund or Jaime, nope. She’s still on the show so she can kick Arya to the ground in a friendly duel, making Sansa feel bad in the process for being the only living Stark without superpowers. Good job!

Boy those Dragonstone drawings sure are convenient. Jon probably drew them himself, using crayons Shireen left behind. I’m not sure which is more deus ex machina, the drawings or Bran. Probably the drawings.

At least Davos finally floated the idea of marriage to Jon. About time the onion knight learned the rules of politics, though I’d pretty much forgive him for anything. Best character on the show by far. Jon does not deserve an advisor as loyal and amazing as Ser Davos Seaworth.

Theon = eww gross go away. He’s so awful. Please, please kill him. We’ve had enough of his misery. He belongs in a Lifetime channel original movie, co-starring Ser Jorah of House Greyscale.

We had another end of the episode battle that popped up out of nowhere. Apparently Dany snuck away from Dragonstone with her Dothraki army and three large dragons without anyone noticing. They were probably busy drawing more pictures on her basement wall.

The battle was amazing to watch. I have very little to criticize (surprise, surprise). It was great to see Jaime in an actual military conflict. Too often he’s underutilized as a sounding board for the other characters. This sequence was some of Nikolaj Coster-Waldau’s best acting, subtly expressing the horrors as his character watched his army burned. At least Randyll had time to tell him the plunder was safe.

Could have done without Bronn being chased by a single Dothraki through the vast carnage before using a massive crossbow all by himself nail Drogon. There is this thing called suspension of disbelief that reminds us that major characters occasionally do unrealistic things for the sake of the narrative. I get that, but this was a little much. Reloading/aiming that thing would have been pretty impossible for one person. Alas.

No, Jaime is not dead. Logic would normally tell us that he would sink, because of all his heavy armor. This is superseded by a greater logic. If a main character is not shown to be definitively dead on screen, he or she is not dead. The real question is, who saved him? My money’s on Gendry…

Overall, this was likely the best episode of the season. Only three more episodes left in this abbreviated season. I doubt we’ll have any resolution to the war in Westeros by season’s end. That’s probably a good thing.