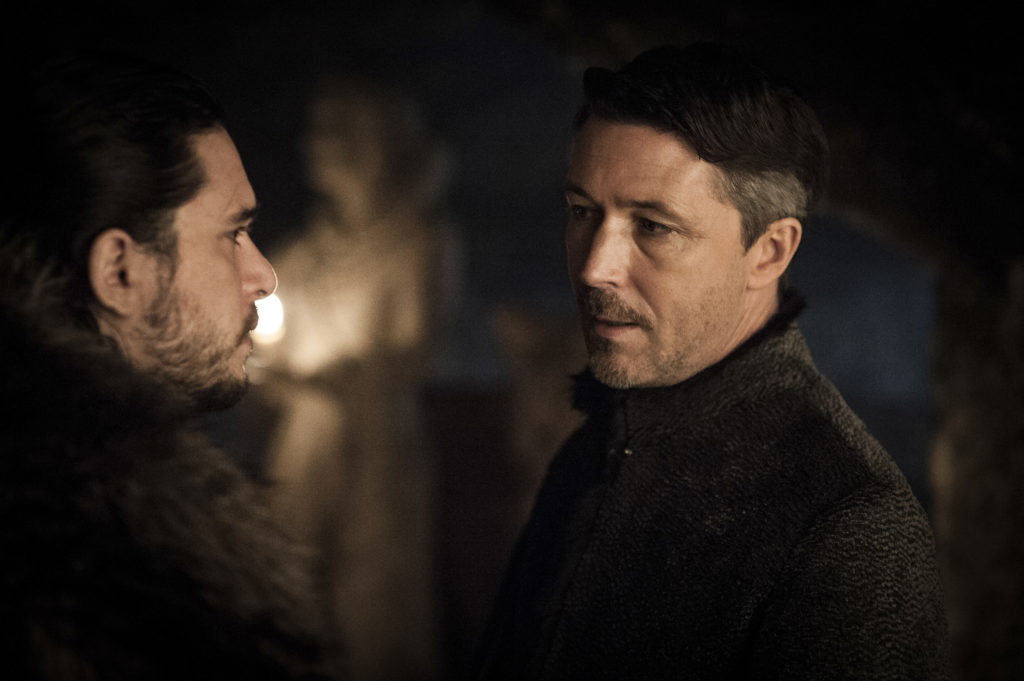 This episode was a strange one. Sam picked pus riddled greyscale off of Ser Jorah and Grey Worm had sex with Missandei, two things I hardly expected season seven to deliver. As if that wasn’t enough fun for one episode, Reek abandoned ship to board a piece of driftwood, presumably to find Gendry after an action sequence that came out of nowhere at the tail end of the episode.

Pacing was my main concern heading into the season. It doesn’t seem like there’s many more episodes left, but the characters do have to do something to pass the time before the big ice zombie battle. For Daenerys, this involves making baffling military decisions and bizarre back and forths about power with an overzealous intelligence expert, who once tried to have her killed.

Dany’s massive army creates problems for the show’s pacing. She has more troops than everyone combined, even if the Ironborn/Dorne were wiped out and Randyll Tarly ended up siding with the Lannisters. That is how powerful the Unsullied/Dothraki/Dragons are (and how much of a mess everyone else’s army is in). Tyrion telling her not to use them sort of makes sense on paper, if you don’t give it a second look. Why would the people of Westeros prefer to be conquered by siege rather than dragons? Why would care about foreign troops when Cersei is their self-appointed queen? Probably to save the show’s budget. Dragons are expensive to show on screen.

The ship battle was brief, most likely in an attempt to cut costs since the players were people we’re hardly given a reason to care about. The Sand Snakes have never made any sense and the viewer has never really been given a reason to care about them. The same sort of logic applies to Yara, whose major redeeming quality seems to be that those around her tend to be less interesting. This is kind of problematic when you factor in Euron, who’s at least charming and fun to watch. I wish they’d just kill Reek. He’s horrible.

Tyrion is married to Sansa. Just thought I’d remind everyone of that. The show appears to have forgotten, even though Melisandre had plenty of time to bring up the Prince that was Promised prophecy that’s been pretty ignored in the show (though Maester Aemon brings up the gender issue in the books). This episode had a couple throwbacks to earlier times, but seems to not care about a pretty big one.

Omitting their marriage is lazy writing, just like another Jon/Sansa debate in a public setting. Haven’t these people ever heard of a conference room? Jon even mentioned it last episode, as if anyone cares. It could have been a substantive debate too. After all, Dany is Jon’s aunt, whose father murdered Jon and Sansa’s grandfather and uncle. Dany’s Hand is also Sansa’s husband, which makes him Jon’s half brother-in-law based on information currently available to the characters. The characters may not know about Jon and Dany being related through R+L = J, but the web is still pretty tangled even without that detail. It would have been nice to see the show really try to dive into that.

Jon is an ungrateful brat. Stannis saved him back in season four and Jon repaid him by mercy killing Mance Rayder and trying to get him to leave the Wall. Littlefinger saves him from Ramsay and he tells him he can’t tour the crypts of Winterfell and attacks him. Rude.

Also, are we really supposed to believe the two most powerful people in Winterfell haven’t had a proper chat until one of them brings up his love for the other’s sister/cousin and sort of motherly figure who never really liked him? What exactly is the Vale army doing? Where is Sweetrobin? Why hasn’t he made anyone fly yet?

Why isn’t Lyanna Mormont in charge of tactical?

The show’s new pacing logic means that a raven sent from Dragonstone now reaches Winterfell in a single scene. The bird must have traveled over on Varys’ magic boat. I wonder how much money he makes from moonlighting as a mailman?

Looks like Qyburn, not Jaime, is Cersei’s hand. Neither are particularly good choices given that one is the Queen’s brother/lover and the other is a mad scientist. You know who would have been a good pick? Randyll Tarly, who was actually floated as a choice by Kevan Lannister in A Feast for Crows. Offering him that post would’ve been a brilliant tactical move, and Qyburn hardly needs the job to keep doing weird things. But that would make sense. The show doesn’t seem to be a big fan of making sense these days.

For those of you who started reading these recaps last week or have forgotten, the “why does Jorah have greyscale?” question has been a running joke since he contracted the disease back in season five. I had a few people message me about that. Jon Connington got greyscale from the stone men in the books. He isn’t in the show. I’m not sure why someone else had to contract his infectious skin disease instead. Alas.

The Samwell/Jorah plotline is clearly headed toward Jorah joining the Night’s Watch, fulfilling Joer Mormont’s dying wish to Sam back at Craster’s Keep. Unlike the Tyrion/Sansa omission, I liked how the show didn’t bring this one up yet. Something for the fans to chew on! Sure could’ve done without that gross scene. Jorah has suffered enough. Please just kill him and Reek.

Arya and Hot Pie’s reunion was fun, even though Arya is pretty scary these days. I’m glad we got some answers as to how much information Arya knew. Given the current pacing, she could have arrived in Winterfell the very next scene!

Part of the reason this episode felt kind of uneven was that all the major characters appeared, crunching down on available screen time. Arya’s brief reunion with Nymeria was a perfect place to end the episode, given the magnitude of the event. But I guess now we get to spend the week wondering where Reek will float off to. How exciting!

That’s it for this week. Thanks for reading. Be sure to catch my live recap show on my author page that airs at 10:15 EST following the episode.