If you picked up a copy of my latest book, June: A Month in Characters, you may have noticed a footnote where I revealed that I am a transgender woman for the first time, at least in publicly available writing. The idea that this sort of news is not typically addressed via footnote led me to pen this article as well, addressing said “announcement.” I’ve been in the process of transitioning for about a year now so I’m hardly an expert on the subject, but that’s kind of what transitioning is supposed to mean.

Coming out has always been a strange concept for me. The truth is, I am out. Many people here in California know this detail of my life. There are plenty of people who don’t know I’m transgender, either on social media or my native East Coast, but I resisted the urge to make a “I’m transgender” post for a few reasons.

The whole coming out to friends and family conversation is horrible and I hate having it. Not because it’s negative, but rather because it’s awkward and fairly monotonous. You’re guaranteed to get a few of the following responses:

“I’m so happy you can be yourself.”

“You must feel so relieved.”

“Thank you for confiding in me.”

“I’m honored that you felt comfortable telling me.”

Often followed by various awkward questions. Granted, these are things people are supposed to say, are sweet and supportive comments to say to someone going through a major change, and are way better than, “I now hate you, we can’t be friends anymore because you’re mentally ill,” but those two outcomes weren’t my only options. I’m a huge fan of the third option, where the conversation doesn’t happen at all and I get to go about my day not having discussions about my gender identity. I appreciate the support and all the kind words, but it’s a less daunting journey than you’d imagine. At least compared to the arduous task of keeping up the façade.

I refused to accept the idea that not explicitly mentioning my gender identity on social media mattered. Such an idea gave the whole concept of social media way more power than I felt comfortable giving it. What matters is how I feel about it. I feel great. It’s not as if I posted trying to “act male,” whatever that means.

There are plenty of people close to me who will find out this news for the first time via this post. If you haven’t noticed, I’m not a huge fan of that conversation and I’d grown pretty tired of having it. I’d apologize, but that also means you didn’t find out from the book which probably means you didn’t buy it. Shame on you!

I chose a footnote because it innocuously got it out there, on the record. It’s done. The footnote and this blog post are the so-called “big reveal.” Ian Thomas Malone is a she, and also keeping her birth name. I’ve grown attached to it over the years. Plus, people have told me time and time again that it’s a great author name. Never, it’s a great male author name. I understand that this is pretty guaranteed to cause confusion down the road, but I’m happy to explain when the time comes. That’s what words are for.

Which isn’t to say that there aren’t plenty of things I wouldn’t change about this rollout. I waited longer than I would have liked to write this post if I could go back and do it all over again. Months ago I made the decision to wait until I started HRT, which I began in May. That proved problematic due to some unfortunate doctor’s visits and the sad state of the American healthcare system, but that finally happened and all is well.

It seems silly, almost painfully obvious, to suggest that my career and my gender identity are two separate things or that transitioning isn’t a process that occupies my thoughts 100% of the time. There have been plenty of days where I’ve wondered if anyone would care about my work after the news dropped, with that tidbit of my life instantly becoming the singular notable detail of my existence. I’m proud of who I am, but the idea of being labeled as the “trans author,” or really any labels for that matter. I’m sure Mark Hamill loved playing Luke Skywalker, but didn’t appreciate the typecasting that inevitably followed.

That’s about all I have to say on this topic for now. I wanted to avoid some kind of “big announcement,” complete with new Facebook pictures and a complete scrubbing of my former self because that’s not how life works. I don’t have all the answers yet, but this journey has taught me a lot more than I’d be able to explain in a single blog post. I suppose that’s why we have these things called books.

Until then, here’s a picture. Enjoy it, because that’s hopefully the last time I wear heels. 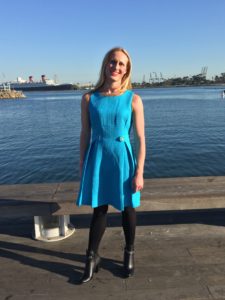