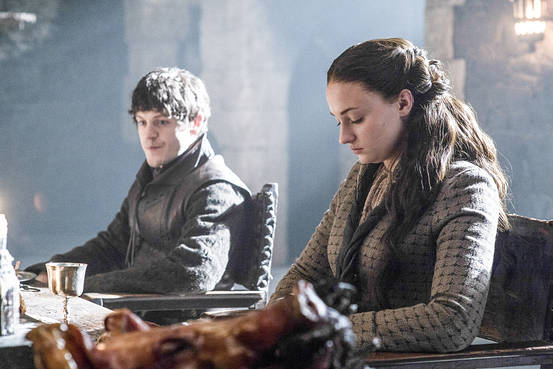 This was a weird episode. We’re at the halfway point in the season and it’s mostly clear where the plotlines are going, at least the ones in this episode (which does leave big question marks on KL and Dorne). Problem is this that there isn’t a ton of logic behind any of the stories in this episode besides Mereen, I suppose.

I had actually forgotten about Jon and the wildlings when I wrote last week’s recap. Given their limited screen time this season, I’m not going to beat myself up over it. I suppose Jon going north is better than Jon going south, but why Stannis would lend his ships to Jon and a bunch of wildlings with seemingly no compensation is beyond me.

The politics of The Wall make up some of the best chapters in A Dance with Dragons. You have Jon struggling to lead the Night’s Watch, Stannis and his men who don’t actually all leave and know that the Watch owes them for saving the Wall, and the wildlings who aren’t being held captive at all. There’s a ton of great stuff with Northern campaigning and even a marriage alliance.

None of that’s really here. The Watch looks even weaker than it does in the books and yet Jon apparently appears to be able to broker beneficial deals with Stannis. It’s also worth noting that Melisandre, Selyse, and Shireen all stay at the Wall, along with plenty of men.

Stannis also doesn’t have the upper hand against the Boltons in the books. The show has mentioned that he does numerous times. One might think that this would be pointing to an upset and problems for the One True King, but with Brienne and an anti-Bolton Winterfell faction brewing, that’s hard to see.

I’m surprised to see that the Samwell/Gilly/maybe Maester Aemon Oldtown storyline appears to be a go. In A Feast for Crows, the three depart toward the beginning of the book. It seemed like a big storyline for the show to give to fairly insignificant characters, especially when characters like Davos had their storylines scrapped. I don’t think that Aemon will go though. He’s probably not long for this world.

I loved the Stannis/Samwell scene. Randyll Tarly is one of the biggest badasses in Westeros and the real military leader of the Reach. He’s barely in the books so I don’t fault the show for not having him in it, but he’s great. Given how pathetic Mace Tyrell looks in the show, it’s nice to see that the show didn’t take the same approach.

Just quickly to get it out of the way, who is sending ravens to the Wall updating them on Dany’s progress in Mereen? Doesn’t make any sense.

Roose allowing Reek, who sleeps in the dog kennel, to serve his food doesn’t make sense.

Roose allowing Ramsay to let Reek give Sansa away doesn’t make sense. In the books, he does it so the Northern bannermen will accept fake Arya (Jeyne Poole) as real since he grew up with her, but that’s not really contested at all.

The lack of Frey troops given Fat Walda’s pregnancy doesn’t make sense. I know I said this last week, but what are they doing?

Sansa being allowed to roam the castle free as a bird doesn’t make sense.

I hate Myranda and am sure at some point, she’ll do something that doesn’t make sense. For now, she’s just creepy.

Brienne being allowed to creep up on Winterfell undetected doesn’t make sense. Don’t the Boltons know everyone hates them?

They do. They know Stannis is coming. So what’s the plan?

It’ll be interesting to see how the show approaches the wedding. There have been rumors that Greatjon Umber, who’s been absent from the show since season one, will return. The Boltons would have to be pretty stupid to think that having a bunch of Northern men in Winterfell when Stannis is on his way is a good idea.

I was surprised to see the Stone men storyline kept. In the books, that happens when Tyrion is traveling with Jon Connington and (f)Aegon. Jon Con is also the one who gets infected with greyscale. More action is usually a good thing.

Except when it leads to Ser Barristan’s death. Ugh. Jorah’s infection makes Ser Grandfather’s death extra puzzling. He will be missed, though moreso by book fans.

I’ve generally hated the Grey Worm/Missandei “romance,” but I liked it here. Ser Barristan and Grey Worm always had a strong respect for each other in the books and it was nice to see him mourn the loss of the old knight. Dany’s supporting cast are often treated like props who only interact with her and it was good to see that that’s not always the case.

Show Hizdahr is far less interesting than book Hizdahr. I guess that’s not too surprising. Seeing Dany force the marriage on him and not the other way around was weird. Not sure where that storyline is going.

That’s it for this week. I didn’t love this episode, but it set some things up. I can’t stop thinking about the Melisandre/Jon dynamic and that I doubt it’ll be addressed this season given logistics. Maybe I know nothing…