Hannibal, The Good Wife, and Redefining the Network Procedural 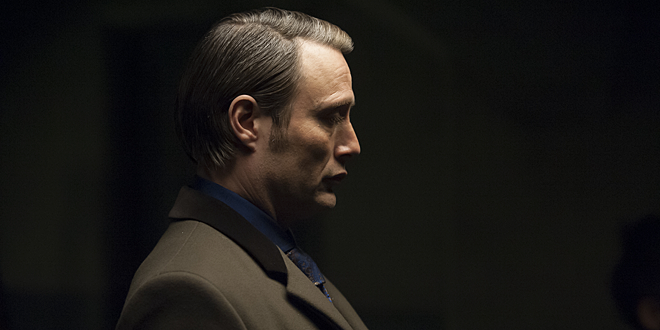 The ever-changing landscape of TV has blurred the lines between content commonly found on network TV and that which you would find on cable. It’s easy to say that network TV has the procedurals and cable focuses on more serialized works and while that’s accurate in a general sense, we’re seeing a shift in concepts that companies are willing to embrace.

This shift comes from both sides and brings us much closer to a middle ground between plot and character focus. Cable networks like USA and TNT feature quirkier characters/dialogue that you wouldn’t necessarily find on CSI, but a show like Graceland still looks aesthetically a lot more like 24 than it does The Wire. That’s not a bad thing either. Few shows can pull off a truly serialized concept like Breaking Bad or The Sopranos, and delivering some resolution to the viewer and the end each hour has its benefits. As much as we embrace innovation in television, more traditional shows like NCIS and The Big Bang Theory still dominate the ratings.

While NCIS gets the ratings crown and Breaking Bad gets the Emmy and we can see the starch contrast that lead both these shows to their respective areas of excellence, there’s plenty of other ways to create a compelling TV show that combine the positive aspects of episodic procedurals with character based arcs that reward long time viewers.

This article focuses on Hannibal and The Good Wife, which are in my opinion the two best network TV dramas. Neither one is a ratings powerhouse, but the critics have heralded both as two of the most innovative network shows in a long time. Other than having fairly well known casts, these two don’t appear to have much in common on the surface level.

The Good Wife is a legal drama that’s aired on CBS for the past five seasons. Backed by producer Ridley Scott and boasting a cast that includes Emmy winners Julianna Marguiles, Archie Panjabi, and Christine Baranski, as well as Alan Cumming and until recently, Josh Charles, The Good Wife combines case of the week stories with strong character arcs that span several seasons. The Good Wife made itself unique in the rather saturated field of legal dramas by playing to its strengths. The show’s cast hits most of what they’re given out of the park and manage to balance the show’s large cast and even larger list of well known guest stars with each episode’s plot, which gets resolved each week even if there’s bigger question left looming. 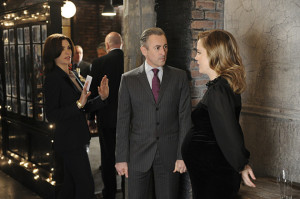 Hannibal is in a similar boat being a drama that works on so many levels that it’s hard to figure out who to credit with the show’s success. Creator/show runner Bryan Fuller has produced three of the most beloved cult shows of the new millennium with Wonderfalls, Dead Like Me, and Pushing Daises deserves much of the credit for crafting a world based off a major film franchise that feels completely different than what we grew to love with Thomas Harris’ books and the film version Silence of the Lambs (and then grew to hate with the film Hannibal). Hannibal’s cast is exceptional as well with Mads Mikkelsen inhibiting a character made legendary by another actor. Five years ago it might have been hard to say that anyone could pull of Dr. Lecter after Anthony Hopkins made the role his but the Danish powerhouse made the character his own without betraying anything we love about the ruthless cannibalistic psychiatrist. Hannibal might have been a pretty good show even if Mikkelsen was its only commendable actor, but with a cast that includes Hugh Dancy, Laurence Fishburne, and Caroline Dhavernas, in plenty of scene-stealers that don’t even include Lecter, Hannibal is easily elevated to one of TV’s gems.

A big reason why both of these shows are successful is that the viewer knows that anything can happen while also knowing that some things will happen over the course of the hour. The viewer will get resolution regarding the killer Will Graham is hunting, but you don’t know what Dr. Lecter is up to. You know that there will be a legal case on The Good Wife, but you don’t know how that will affect the Florrick/Agos split from Lockhart/Gardner.

TV viewing is often a give and take relationship. The payoff for a show like Breaking Bad is more suspenseful, but you’ll have to wait a season to get it. The other side of the spectrum is Law & Order: SVU, which all but guarantees closure at the end of the hour. To quote The New Radicals, “you only get what you give.”

Which is why the middle ground is all the more appealing. Hannibal and The Good Wife throw you a bone every week without compromising the integrity of the show. You don’t really know if each episode will focus more on plot or character, but it’s going to be exciting and worth tuning in for. Predictability in that sense is certainly welcome.

While neither one of these shows are big ratings draws, they’re both fundamentally good for TV. Network TV will always try to deliver programming that gives viewers at least some semblance of satisfaction each week. That doesn’t mean we have to live in a world with a million NCIS and Law & Order clones (maybe just 500,000 of them). Hannibal and The Good Wife show that innovation and tradition aren’t mutually exclusive. You can have your cake and eat it too, just probably not if Dr. Lecter prepared it.