Parenthood is Better Off Not Coming Back for Season 6

Parenthood has been one of NBC’s best shows for the past five years. The family drama based off the 1989 film of the same name starring Steve Martin, Keanu Reeves, and the guy from Honey I Shrunk The Kids has had its fair share of ups and downs quality wise, but more often than not it’s an enjoyable forty two minutes with one of TV’s better casts. This season was its first twenty-two episode order since season two, a very unusual scenario for a network show. Unfortunately, that led to more than a few problems.

There’s a reason cable shows almost always air shorter seasons than broadcast. It’s far easier to plot a thirteen-episode order for a semi-serialized show than a twenty-two episode one. Parenthood benefitted from fewer episodes as the writers could figure out what they wanted to do with the show’s large cast. In theory, more episodes should’ve been a good thing as the show could’ve explored many of its more underutilized characters. Instead it spun its wheels for the most part until last week’s finale.

There was a huge imbalance in character storylines. Amber and Sarah did little other than explore tired romance plots from season four while Crosby’s major plot point cen 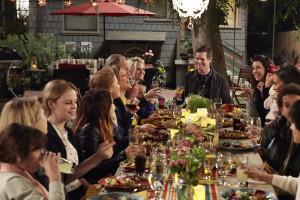 tered on mold. Despite being on the sidelines for the majority of the season, Kristina managed to find time to run for mayor and open up a charter school. Realism and TV are not exactly a match made in heaven, but Parenthood’s simplistic concept should’ve lead to plots that were either somewhat more believable, or a least a little more developed. The mold and the mayor race received around the same amount of attention, showing us all where this show’s priorities lie.

There were a few shining moments, mostly belonging to the team up of Hank and Max, the show’s two best characters. Given Julia and Joel’s status as lesser character in the grand scheme of the Braverman hierarchy, their marital struggles were handled admirably, if not a bit drawn out. I have similar feelings about the Zeek/Camille house feud, which would’ve benefitted greatly from an expedited resolution.

Despite the mess of a season, the finale was well executed, aided by Haddie’s return to the fold. It even felt like a finale. Which is why if it turns out to be the finale, everyone should be okay with that.

As of April 26th, Parenthood has not been renewed for a sixth season. We can reasonably expect a decision from NBC in the next few weeks as they prepare for upfronts. There’s been plenty of talk on the internet about a shortened sixth and final season, understandable given the typical shortened seasons that the show has aired in the past.

But I say no, let this season’s finale be the finale. Series finales are incredibly difficult to pull off. Any show that can avoid polarizing finales like Lost, The Sopranos, Battlestar Galatica, and more recently Dexter should take the opportunity. It’s hard to really say that Parenthood would be better off with thirteen more episodes after such a satisfying finale.

The fact that the NBC bumpers were advertising the Parenthood “finale,” rather than “season finale” leads me to think that this is it for the Braverman’s. I’m okay with that. I’d welcome a Hank/Max spinoff, but I don’t need to see any more Drew college melodrama or a Kristina subplot where she runs for President after the show makes a time jump to 2016. Some shows run out of steam and its better to end on a high note than to come back on borrowed time for some more filler that won’t benefit the show in any way.