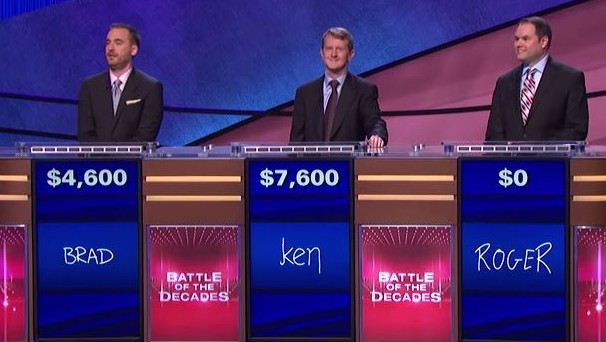 Between the Battle of the Decades Tournament and the 11 and (as of this article) 17 game win streaks of Arthur Chu and Julia Collins, Jeopardy! has quietly entered its most significant eras in the show’s long and storied history. Each of these events on their own would likely stand out as the most noteworthy event of the year for the venerable quiz show. What’s even more impressive is that these three events all happened at the same time.

While the Battle of the Decades started in February, the tournament was not completed until just a few weeks ago. In that time, nearly every noteworthy contestant of the Alex Trebek era returned in what could very well be the most exciting tournament in the entire history of the show. Though a major part of Jeopardy!’s appeal is that the show is largely the same from episode to episode, the Tournament finals were clearly something special as Brad Rutter, Ken Jennings, and Roger Craig delivered a match for the ages.

It was hard to really miss the tournament in the weeks in between as there were plenty of exciting things going on in regular play. Arthur Chu’s extreme use of the Forrest Bounce, a tactic named for champion Chuck Forrest that involves jumping around the board to throw off opponents, and his large Daily Double bets made him easily the most controversial contestant since Ken Jennings. Chu’s reign was so controversial that it attained more press coverage than the tournament itself.

While Chu lost on March 12th, before the Battle of the Decades reached its quarterfinals, Julia Collins insured that there would be another memorable regular contestant before the tournament was concluded. Collins’ active streak seems like a long time, largely because it is in fact a long time. But since she won her first game on April 21st, those seventeen games have been stretched a lot longer as Brad Rutter won his two million before Collins even made history as longest running female Jeopardy! champion. Collins style couldn’t be more different than Chu’s, but her conservative approach has served her well. Collins is quick with the buzzer and rarely gets Daily Doubles wrong, allowing her to achieve runaways without taking big risks.

It’s hard to believe that since February, nearly every person who has made an impact on Jeopardy! has either been back on the show or made a name for themselves in that time. Aside from David Madden, every major champion came back for the Battle of the Decades while Chu and Collins wrote their own chapters in the Jeopardy! history book. For a show that isn’t known for its continuity, we’ve been flooded with memorable characters for a few months now.

There aren’t that many truly memorable Jeopardy! contestants and yet we’ve seen nearly all of them this year. This span could very well be the most exciting time in the entire history of the show. Unless the expand the number of podiums, we won’t see Rutter, Jennings, Craig, Chu, and Collins all in one game. Even if we did, we wouldn’t likely return to regular play to see another long streak continue when it was over.

Sure there’s purists who would prefer that old five game limit, but the fact that the streaks of players like Jennings, Chu, and Collins happen so infrequently makes them special. We’re closer to the end of the Trebek era than the beginning, which is only natural when a person has been occupying the same job for thirty years. But what isn’t natural is for a decades old show to surprise viewers with a surprisingly memorable time period that will be remembered for years to come.When Collins loses, things will likely go back to normal. It seems weird that we’ll be without a memorable contestant for the first time since snow littered the northeast, but that’s a big reason why Jeopardy! has been such an institution.

« X-Men: Days of Future Past and the Unimportance of Film Continuity
Netflix’ Derek Continues to Be TV’s Oddest Offering »