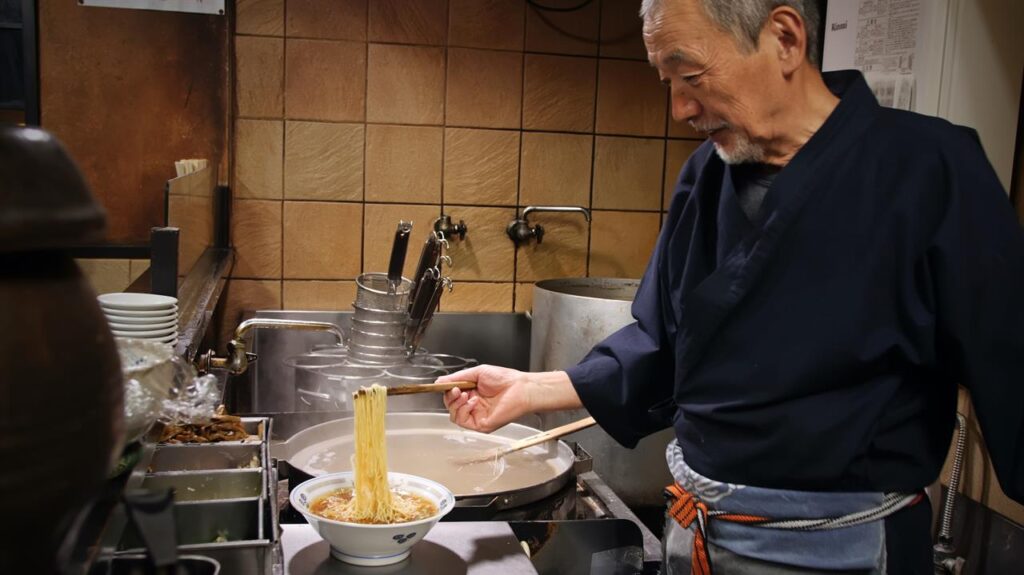 Even before the pandemic upended the entire world, the digital age transformed the very nature of what it means to be a community. For all the ways the internet had brought people together, especially the marginalized, it’s hard to understate the value of a friendly face in one’s own neighborhood. The documentary Come Back Anytime centers its narrative on the sheer power of a simple bowl of ramen to bring people together.

Masamoto Ueda is a self-taught chef who’s operated a small ramen shop, Bizentei, in Japan for more than forty years. While culinary trends change rapidly over the years, Masamoto, affectionately called Master by his regulars, has kept his recipe steady over the decades, a style that reminds his customers of traditional Tokyo street ramen. After only a few minutes, it’s easy to see the appeal of Bizentei, where customers can eat at the counter barely a foot away from where Masamoto prepared their meal, a gentle old man with a warm spirit.

Director John Daschbach does a fabulous job communicating taste through his visual medium. Ueda and his customers expertly break down what sets Bizentei’s menu from other ramen shops. It’s pretty impossible not to look at the food without getting hungry, but you also learn a great deal about the art of fine ramen.

Of course, there’s more to the story than just stellar soup. Ueda has fostered a community over his decades running Bizentei, a place where regulars not only come to eat, but to laugh and share in each other’s company. Over the course of the film, customers share the ways that Ueda has helped them along the way, often inviting them for foraging trips to the mountains, or simply offering a place for them to cry when times are tough.

Daschbach crafts a compelling case for the nature of legacy. Ueda has never been concerned with building a ramen empire or even handing over the reins once he gets too old for the work. Instead, he’s pretty purely fixed on the moment, providing for his family and his community. It’s pretty refreshing to see a director present his material for what it is, a beloved restaurant that someday won’t be there anymore. The world won’t end when Ueda retires, but Daschbach eloquently communicates the impact he’s made on his little slice of the word. Nothing lasts forever.

The film does stretch itself a bit thin to achieve a feature-length runtime. Daschbach does not need 82 minutes to make his points, increasingly relying on scenes outside Bizentei in the third act with diminishing results. Ueda is a fascinating subject who’s open and generous in his interviews, providing a well-rounded sense of the man by the time the credits roll.

As the pandemic has fractured our own sense of community, Come Back Anytime is a strong testament to the power of simple connection. Food culture often finds itself caught up in the latest fad, or the most photographic presentations. There’s a reason people can eat at a place like Bizentei multiple times a week for twenty years. A true master can let his craft speak for itself.