‘You’ Season Three Review: The Suburbs Are a Welcome Change of Pace 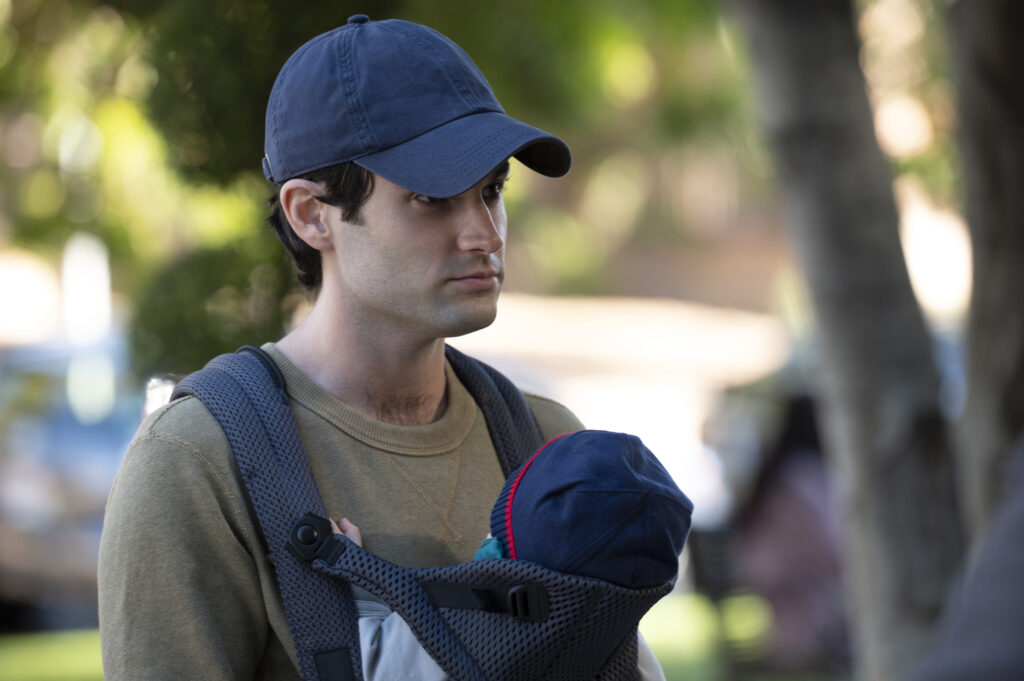 The more things change, the more things stay the same. You centers its narrative around a deeply damaged man, unable to completely wrestle control of his life from the trauma that’s acted like an anchor throughout his existence. Joe Goldberg is not a good person, but Penn Badgley plays him with such a purposeful sense of glee that it’s hard not to be captivated by his world.

Season three presents an opportunity for Joe and Love Quinn (Victoria Pedretti) to move on from their murderous ways. Happily married with a baby and a nice house in Madre Linda, a quiet generic suburb full of athleisure-adorned people constantly checking their gluten intake, the two have a seemingly picturesque life, one that makes it easy to forget how close one of them was to murdering the other last season. You makes a welcome pivot away from Joe’s stalkerish inclinations, but the delectable psychological thriller wouldn’t be the same without some fresh bodies to hide.

The change in scenery works wonders for the show. Gone are the cliched publishing characters and the unintentionally realistic predatory comedians who dragged down the show’s strong writing. Madre Linda is hardly a bastion of originality as a location, ripped straight from a Lululemon fever dream, but the town is populated with grounded, three-dimensional characters. Season three has by far the show’s strongest supporting cast.

As local librarian Marienne, Tati Gabrielle delivers the strongest performance of all the newcomers, one of the few characters who actually feels like a real person and not a walking cliché. The more superficial characters work pretty well too. Neighbors Sherry (Shalita Grant), Cary (Travis Van Winkle) and Matthew (Scott Speedman) break through their superficial introductions. Madre Linda often feels like a Foucaldian panopticon, the depth of the characters giving the town a lived-in quality that conveys its suffocating nature.

Season three works best when Joe and Love are on the same page. Badgley and Pedretti have wonderful chemistry, making it so easy to root for a relationship that should not exist. Even putting the attempted murder aside, the two are not a good fit, but the show sells it so well that you believe in them.

Of course, You is not the story of balanced people looking to put in the hard work toward building a happy future together. Conflict is inevitable for couples, especially within the confines of a television season that needs drama to fuel the narrative. The show has a lot of fun exploring the pitfalls of picturesque lives, demonstrating the challenges of engineering a happy life even when all the pieces seemingly fit together.

The ten-episode season does hit some pacing snags, particularly in the back half, at least two episodes longer than it needs to be. Few shows do a better job answering any plot questions their audience might have. There are several times across the season where the story takes a head-scratching turn, only for the show to confront this dynamic an episode later. You might be the most self-aware show on television, perpetually nimble in addressing its own narrative shortcomings.

There’s a lot of natural goodwill that stems from the show’s ability to gauge its own perception. You may not always agree with the way You structures itself, but it’s the kind of production that clearly values the intelligence of its audience, with a few exceptions. Joe and Love’s marriage in particular is a vulnerable dynamic, relying a bit too hard on the confines of the traditional family structure when there are bumps in the road.

There is another point where Love vents about the burdens placed on young mothers to remain sexually desirable for her husband while also juggling a career and a newborn child. Trouble is, the baby is little more than a prop for either Love or Joe. The bakery that Love opens early on the season is an outlandishly low priority, a new business with few customers and seemingly no overhead. Money is only a problem when You wants it to be, which is to say, rarely.

You occasionally struggles with putting forth a case for why Joe and Love should be together, a lie that countless people have told themselves while in unhappy marriages. The show doesn’t want them to be blissfully in love, for obvious reasons. “Stay together for the kids” isn’t widely regarded as good advice, but it might be for Joe and Love as murderous parents. Season three doesn’t spend enough time exploring this reality, too much else on its mind.

While other shows have avoided mentions of the pandemic, You plots an interesting course. Covid isn’t completely outside the show’s peripheral vision, a forgivably moving target that a massive television production would naturally struggle to adapt. There are some puzzling moments, but it’s admirable to see the show attempt to provide some commentary on this peculiar moment in our collective history.

Backed by strong writing and excellent performances, You isn’t showing any signs of aging in its third season. The story isn’t a perfect fit for the confines of a ten-episode season, but the cast makes up for any lulls along the way. The suburbs are a place where people go to settle down, a calmer form of life than what’s offered in big cities. You finds some of its most creative work smack dab in the environment where creativity is thought to die, where the young go to grow old. This show still has plenty of life left.