Preoccupied With Chappelle’s LGBTQ Grievances, The Closer Sacrifices Humor at the Altar of Cancel Culture 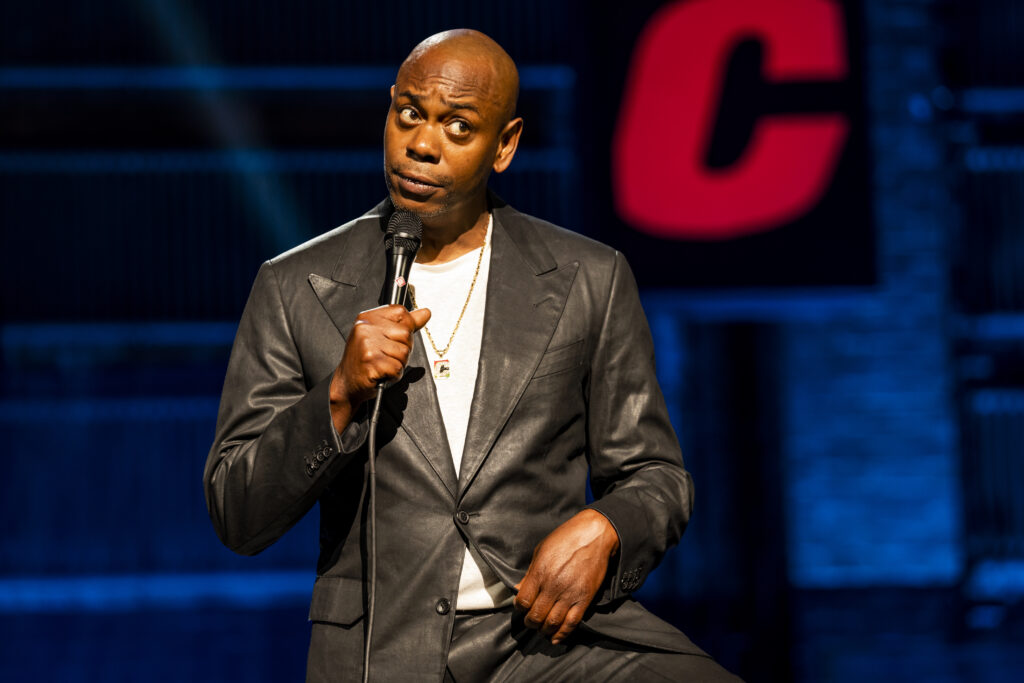 The world has changed quite a lot since Dave Chappelle released his first Netflix special in 2017, further solidifying his status as one of the greatest comedians of all time. The concept known as “cancel culture” rode the wave of Trump’s perpetual victimhood, an attempt to preserve the communal status quo from efforts toward a more inclusive society. The free market, the same system that rewarded Chappelle’s ample talent with a $20 million-per-special price tag, now takes a more critical approach toward actions and language increasingly belonging to a bygone generation.

Dave Chappelle is the most successful comedian alive. That notion might be lost on a viewer of his latest special The Closer, an hour that largely abandons the pretext of comedy in favor of a litany of grievances, many toward the LGBTQ community more broadly, with a special emphasis on his seemingly favorite punching bag, the transgender community, or “transgenders” as he puts it.

Much of The Closer focuses on Chappelle grappling with the concept of empathy. He has plenty for disgruntled rapper DaBaby, widely condemned for homophobic remarks on stage in August 2021, which led to booking cancellations. Chappelle makes an interesting point that DaBaby’s career faced no hurdles after the rapper shot a man in Walmart, implying that homophobic jokes are a bigger offense than murder. The media’s selective sense of outrage isn’t really his target though.

Instead, Chappelle spends much of The Closer building an outlandish case that LGBTQ people possess a set of special privileges that people like DaBaby, J.K. Rowling, Kevin Hart, and himself do not. He suggests a kind of cozy relationship between the police and white gays, putting aside the well-documented history of homophobia within law enforcement. He laughs as he says he’s jealous of the gay community, reinforcing bits from Sticks & Stones, spending an entire special complaining that he can’t make jokes about gays as he makes jokes about gays.

Chappelle presents a similar case against Hollywood’s role in the #MeToo movement, highlighting events of performative allyship such as the all-black attire for the 2018 Golden Globes. He’s not wrong to suggest that the women who donned black dresses could have made bigger impacts by dismantling the industry’s power structure, but his conclusions bend over backward to toss the baby out with the bathwater. It’s a convenient manufactured either/or scenario, one beneath a man of Chappelle’s ample wit.

It’s hard to look past the intellectual dishonesty of Chappelle repeatedly insisting he’s not transphobic, even as he compares trans women to blackface, defends TERFs, and misrepresents Rowling’s long history of anti-trans sentiments. He puts the entirety of the blame for his perceived transphobia on an article from a gay publication from fifteen years ago, claiming that every criticism leveled against him stems from secondhand accounts of his work. Not, you know, the constant transphobia found in Sticks and Stones, or the current special he’s on stage performing.

There’s a certain benign quality in Chappelle’s regurgitation of old trans jokes, often too dated to truly offend, but The Closer takes a truly disgusting turn when he talks about a transgender friend of his who took her own life in 2019, days after the release of Sticks & Stones. Chappelle essentially blames the trans community for Daphne Dorman’s death, suggesting that she was bullied into suicide for defending him. The extended bit is a jaw-droppingly oblivious accusation to level against a community that faces grossly disproportionate levels of online abuse. His own jokes have supplied ample fodder for rampant online abuse of LGBTQ people.

A trust fund Chappelle started for Dorman’s daughter is flaunted as evidence of his allyship, using charity as a shield as he continues making transphobic jokes. He’s seemingly incapable of processing criticism through anything other than the prism of “us vs. them,” using that false binary to paint a portrait of people simply becoming trans to win the oppression Olympics, a tired trope completely detached from the realities of the trans experience.

Chappelle’s rampant transphobia doesn’t need to be a problem as long as the jokes land, but his obsession with grievances supersedes any pretense of crafting actual humor. He doesn’t look like he’s having any fun on stage, an audience that seems to pick up on this reality halfway through the special. He’s weirdly paranoid for a man being paid twenty million dollars for an hour of his time, afraid of a community with no foothold in the world he dominates.

There are fragments of a conciliatory message echoed in The Closer, often at odds with the rest of the special. Chappelle suggests he’d like a world where LGBTQ people felt included in his comedy rather than as the butt of the joke. That’s a hard proposition to consider when so much of his work these days isn’t really about comedy, but “cancel culture” and the perceived censorship by some of the world’s loudest voices. If Chappelle is sincere in his desire to make inroads with the trans community, he might want to start by crafting some more original material. Chappelle’s Netflix tenure started with a bang. With The Closer, the world’s greatest living comedian ends this chapter of his career with a resounding whimper.