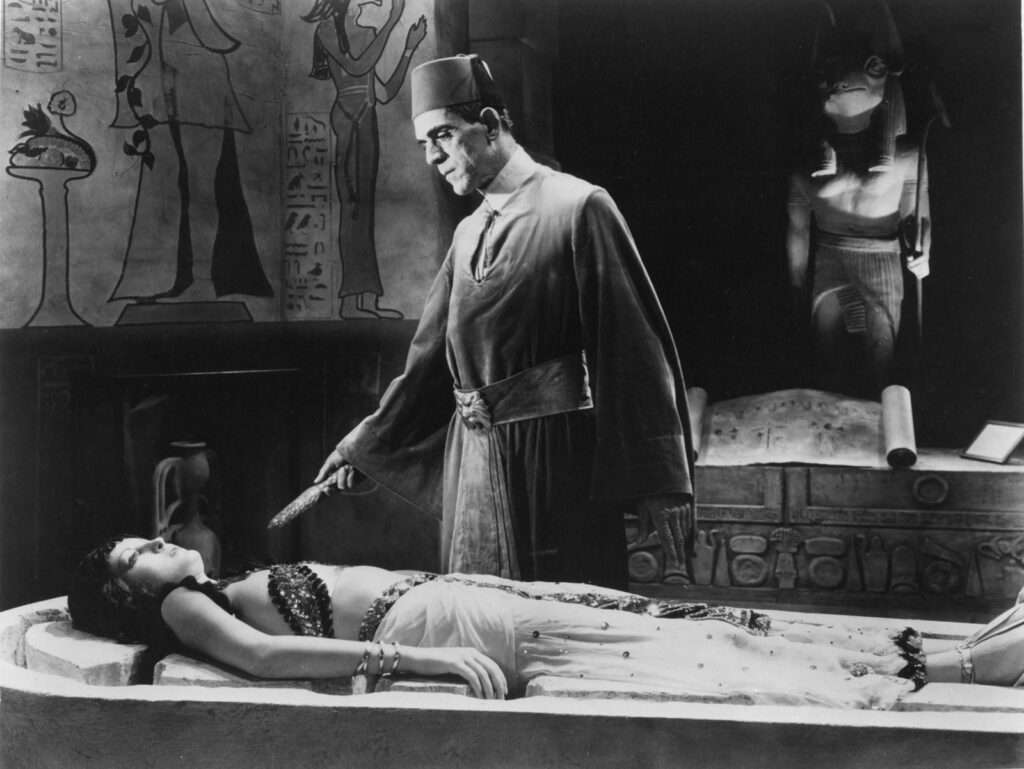 A film like The Mummy (1932) confronts modern audiences with the very nature of what it means to be “genre-defining.” The Mummy is one of the most iconic horror films in history, without actually being all that scary. Even putting aside the cultural differences of the past 90 years, it’s hard to really imagine a packed screening full of people in the 1930s clinging together in abject terror. Director Karl Freund’s work isn’t that kind of film.

Instead, the narrative largely relies on its villain’s innate ability to get under the audience’s skin. The film starts off at the site of an archeology dig lead by Sir Joseph Whemple (Arthur Byron) and Dr. Muller (Edward Van Sloan) searching for the tomb of Imhotep (Boris Karloff). Sir Joseph’s assistant Ralph Norton (Bramwell Fletcher), an archaeologist assistant, reads a scroll which awakens the mummy, driving him insane in the process, instilling a heightened baseline suspense that continues for the rest of the film, set ten years later.

Imhotep, now living as the historian Ardeth Bay, isn’t really looking for revenge on a world that buried him alive. Sir Joseph’s son Frank (David Manners) takes over for his father as the ostensible protagonist, though predictably the mummy remains the real star of The Mummy. Karloff delivers the kind of singular performance that carries the entire film. The indomitably cool Ardeth Bay remains one of the genre’s defining achievements.

Ardeth Bay shares some DNA with Frankenstein’s Monster in the sense that both aren’t really villains in the traditional sense, but rather victims of unfortunate circumstances trying to find some meaning in a world that has no real place for them. Bay is a much smoother operator, quickly seizing the means of production for his own goals, namely the resurrection of his long-dead lover to inhabit the body of Helen Grosvenor (Zita Johann). While certainly self-serving in his murderous intentions, the film is careful not to turn Bay into a figure of cartoonish villainy.

The film’s brisk 73-minute runtime hardly has much room for substantive character development. Johann and Manners put in solid work toward giving the audience someone to root for, but nothing really works without Karloff anchoring the narrative. The Mummy lets you empathize with a tragic figure who’s traversed thousands of years without the woman he loves. There’s no grey area in the film’s morality, but it’s a mature sense of conflict that considers everyone’s individual stakes.

Few films in the horror genre have delivered such fascinating character studies. Blood and gore might shock a viewer, but The Mummy finds chills that cut much deeper. The humanity of Ardeth Bay still resonates nearly a hundred years later. The film likely won’t make you jump out of your seat, but Karloff’s performance gives the mind so much to chew on long after the credits have stopped rolling.