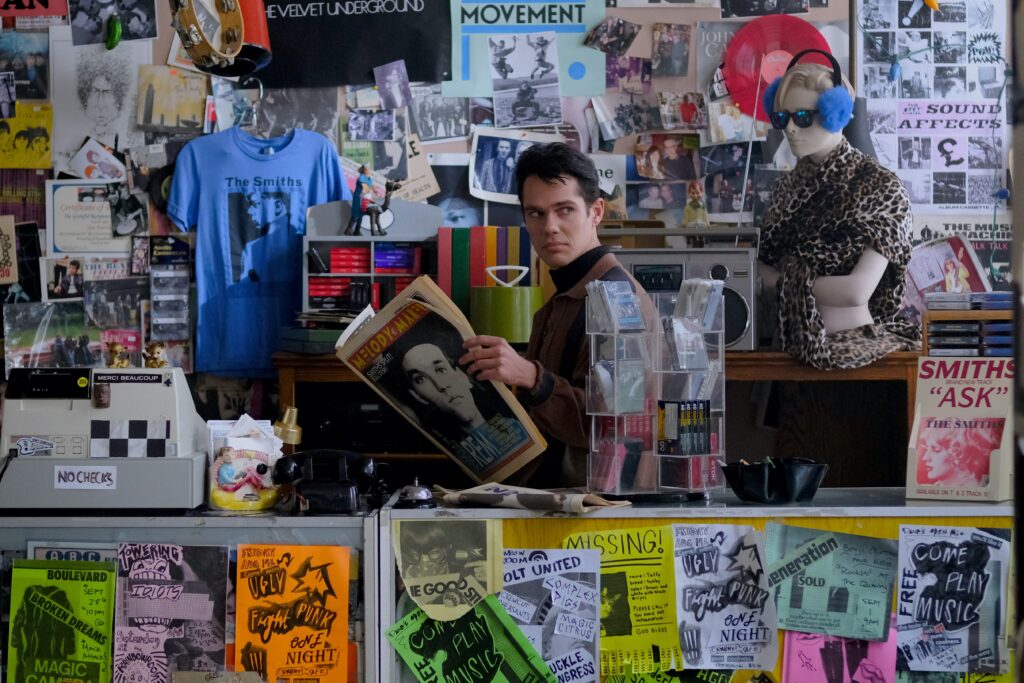 The Smiths are an easy band to fall in love with. Morrissey’s humorously melancholic lyrics work beautifully layered on top of Johnny Marr’s jangly riffs. Producing only 70 songs over the course of their five-year career, with only a few duds, it’s not very hard to memorize the lyrics to them all. There’s a certain poetic tragedy to be found in their short tenure as a group, undoubtedly enhancing their legacy.

The new film Shoplifters of the World centers its narrative in the immediate aftermath of the group’s breakup. Armed with a soundtrack full of Smiths tracks, director/writer Stephen Kijak presents a story that takes place over the course of a single day. The longer the film goes on, the more it looks like that was the same amount of time it took to craft his atrocious screenplay.

Kijak relies too heavily on Smiths songs to carry his otherwise empty narrative. Longtime fans may want to rethink their dedication after watching this disaster. Kijak’s screenplay includes line after line directly lifted from Smiths songs, often merely just the titles of Smiths songs, but he never seems interested in doing anything more than lazy wordplay. There are a few strands of plot to be had in dealing with homophobia and growing up, but the film is never particularly committed to any of its characters.

The biggest problem with the narrative is that it can’t survive at all without The Smiths. The film has absolutely nothing going for it besides its soundtrack. There are a few times where Kijak inserts archival footage of old Moz interviews into the film, trying to send home the message that these songs can save lives. Unfortunately, Morrissey can’t really save this awful film that’s far too desperate to lean on him without a crutch.

There some broader complaints that might feel like nitpicking more if the film didn’t solely cater to Smiths superfans. The timeline is an absolute mess. Taking place on the supposed day of their breakup, the film ignores the basic fact that Marr had left the group months before the release of their final album, Strangeways, Here We Come. Set in Denver, Colorado, Kijak completely overblows what their American popularity would have been in 1987, instead inserting their broader legacy into the picture as if it had been there all along.

Some of those historical liberties might be easier to forgive if the narrative was better or if The Smiths’ broader timeline wasn’t fairly simple to follow. The sole redeeming quality of the film lies in its soundtrack, but Smiths diehards would be better off simply putting on a record and listening to the music without this mess getting in the way. Kijak is obviously a fan by token of the film’s existence, but he does an absolutely terrible job communicating that affection to a broader audience.

Morrissey’s lyrics appeal on a deeply personal level, the kind of depth that keeps fans returning to his work after all these years. None of that is communicated well in Shoplifters of the World. It’s hard to think of a worse way to honor the legacy of The Smiths than by watching this film.

shoplifters of the world the smiths