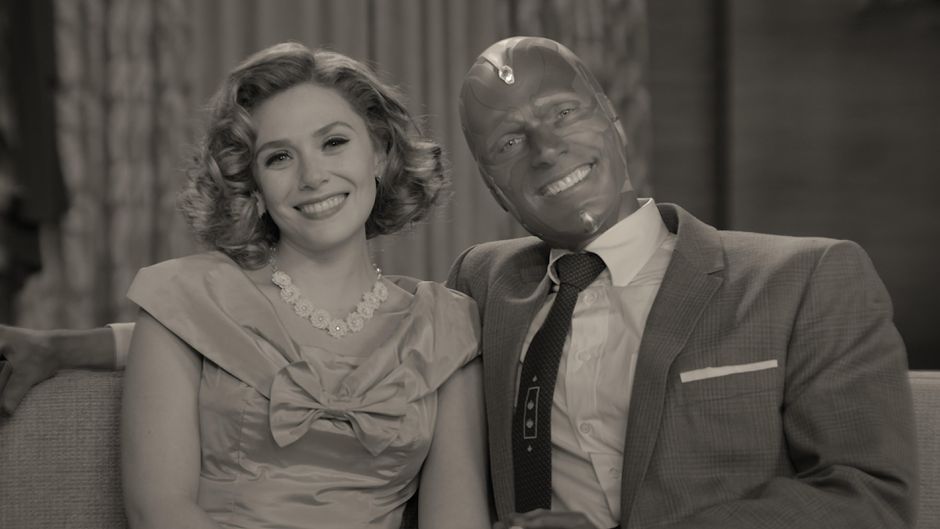 WandaVision ushers in a new era for the MCU on the small screen. While Marvel Television only delivered peanuts on its promises of a shared continuity, Marvel Studios has brought the gravitas required to create a real sense of connectivity to its storytelling, largely in the form of its two leads. The Scarlet Witch and Vision hardly got much of a chance to shine across a handful of films that had many other heroes to entertain itself with.

The series largely succeeds on the chemistry of Elizabeth Olsen and Paul Bettany, perpetually eager to act out WandaVision’s many tributes to classic American sitcoms. There are smiles to be had on everyone’s faces, though the audience knows the idyllic suburb is hardly what it seems. Sparking nodes of Marvel Comics, “House of M” and “Decimation” arcs, the show offers a slow burn that gradually hints at what lies ahead in the MCU’s post-Avengers: Endgame world.

To some extent, it’s a good thing that WandaVision leaves the audience wanting more by the time the credits roll. There is also the reality that this is the first meaningful new piece of MCU content since 2019’s Spider-Man: Far From Home (not counting Marvel Television’s Helstrom, which served as an uninspired curtain call for the company), the longest stretch in franchise history. It’s a burden that shouldn’t be WandaVision’s to bear, the first glimpse of how the future will look for Marvel on Disney+.

The reliance on humor based in nostalgia for sitcoms that aired more than fifty years ago is bound to rub some people the wrong way. As a company, Disney has increasingly relied on nostalgia as a selling point for much of its cinematic portfolio, including their live action remakes and the Star Wars sequels, which often felt like remakes themselves. People are starved for new Marvel content, only to be presented with references to pieces of Americana that their grandparents grew up with.

Television is a medium that tends to save its biggest bangs for its premieres and finales. WandaVision is presented as event television, only to mostly spend its time mirroring more conventional entries in the form. This formula would almost certainly play better if the audience was treated to a traditional twenty-two episode season that used to be the norm. The fact that most of the audience has waited years to learn the fate of Vision after his Avengers: Infinity War demise doesn’t exactly do much to temper expectations.

WandaVision is solid television, albeit not the kind of fare that’s well designed to live up to unsustainable hype. The Mandalorian is really, really good at producing cinematic-quality storytelling in practically every episode. WandaVision sits in the same category as a standard-bearer for a top-tier streaming service, lacking the sense of mandate to be the MCU’s flagship television offering.

Whether that’s fair or not is kind of beside the point. Olsen and Bettany are fun to watch no matter the circumstances or the state of the MCU’s broader portfolio. There’s a natural sense of urgency to want something to happen, but it’s hard to dwell on that too long when the present put in front us manages to put a smile on one’s face each and every week. Maybe WandaVision will overstay its welcome down the road, but for now, the show is still a delight.

« Nomi Ruiz, star of Haymaker
Haymaker is a worthy entry into the trans film canon »