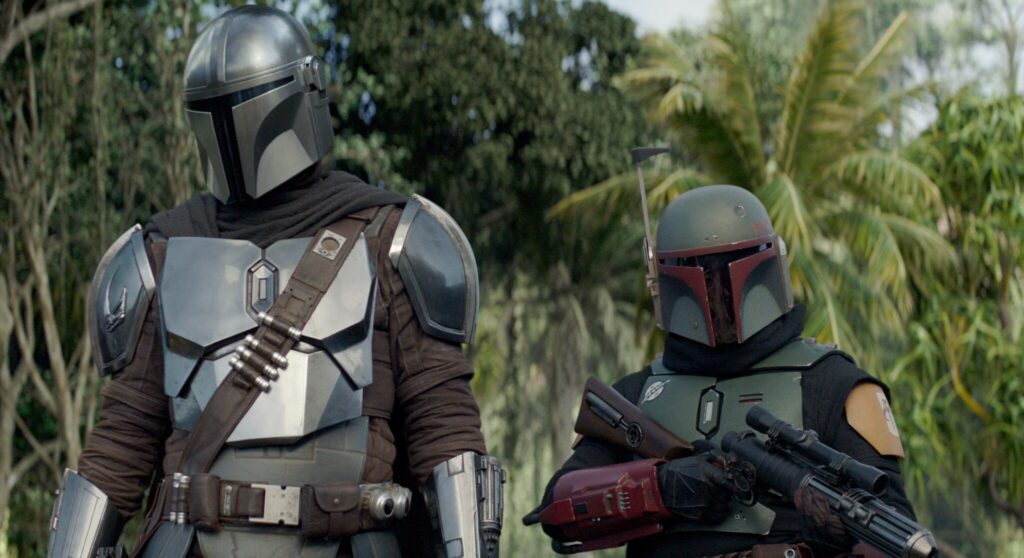 This season of The Mandalorian has done a superb job with its big moments. Ahsoka Tano, Boba Fett, and Bo-Katan all shined in their debut episodes. As a medium, television rarely relied so heavily on the giant splashes before the streaming era. The quieter moments need to count too.

The Mandalorian is not very good at stopping to take a breath in order to process its events. Mando has assembled an impressive team of Fett, Fennec, and Cara Dune to help him rescue Grogu, but as an episode, “The Believer” cares very little for any of these people. Chapter 15 belonged to Migs Mayfeld.

For a show starring a puppet and a bounty hunter who never removes his helmet, The Mandalorian has done a fairly decent job building up its supporting bench. Bill Burr shined in last season’s sixth episode as the backstabbing former Imperial sharpshooter. Now imprisoned, Mando needs his services to figure out the location of Moff Gideon, whose imprisonment of Grogu apparently prevented him from making an appearance this episode.

The whole Morak quest was a fairly paint-by-numbers undercover mission. The Mandalorian often leans heavily into Western tropes, but here it was borrowing heavily from the spy/adventure shows that once populated the network TV landscape. It’s fun without being particularly inventive or ambitious.

Most jarring in the episode was the sequence after the undercover Mando and Mayfeld fought off a raiding party, only to be greeted with a chorus of applause from Stormtroopers. We rarely see Stormtroopers winning anything, let alone actually hitting a single target. If anything else, it was entertaining to watch.

Burr did a great job with fairly mundane material. His commentary on the geopolitics of Morak was a clear substitute for American interventionism abroad in places like Vietnam and Iraq, fairly out of place in the Star Wars universe. As the audience, we can follow along with his broad points as they relate to our reality, but that isn’t a dynamic Star Wars has ever really shown to us. The Empire and the New Republic are not really two sides of the same coin.

The dramatic tension in this episode mostly stemmed from Mando being forced to remove his beskar helmet. As soon as the Stormtrooper helmet went on, it became clear that we’d probably get an appearance from Pedro Pascal, mustache and all. Bo-Katan’s statements on Mando’s sect of Mandalorian being extremists set this all up quite well.

Pascal handled the dynamic well, constantly looking like a fish out of water without his security blanket. It’s not a super compelling conflict, since I imagine most of the audience would rather see Pascal on a regular basis rather than stare at Mando’s expressionless helmet. Like Mayfeld’s pontifications on relativism, much of this drama felt like going through the motions.

Mayfeld gets redemption as a character through his ill-advised rant to his former commanding officer Valin Hess (Richard Brake, who’s familiar to Game of Thrones fans as the first Night King). The whole sequence was obviously made to set up his release at the end of the episode, while maybe also serving to show him as not a bad guy. It’s entertaining while also being just a tad too predictable.

The action was mostly good, even if the sight of numerous Imperial officers running to their immediate deaths in the mess room hallway seemed a tad ridiculous. Cara and Fennec had some moments, but Fett was left with not enough to do. I guess we can blame that on some stage fright that some Imperials might recognize his face after his father served as the template for the entire Clone army.

This season has largely been about Mando coming into his own as a father. With that in mind, it’s easy to see why the show wanted to have Mando send a threatening message to Gideon. It did feel rather out of place for him as a character though, needlessly showing his cards.

While a bit lazy in its execution, Chapter 15 served as an effective set-up for the season finale. Burr got his moments to shine, but with a 38-minute runtime, it’s hard to make the case for why no one else could have had a moment as well. Fett superfans were bound to be disappointed by the sidelining of the original helmeted bounty hunter. The Mandalorian needs to do a better job with simply taking a breath every once in a while.