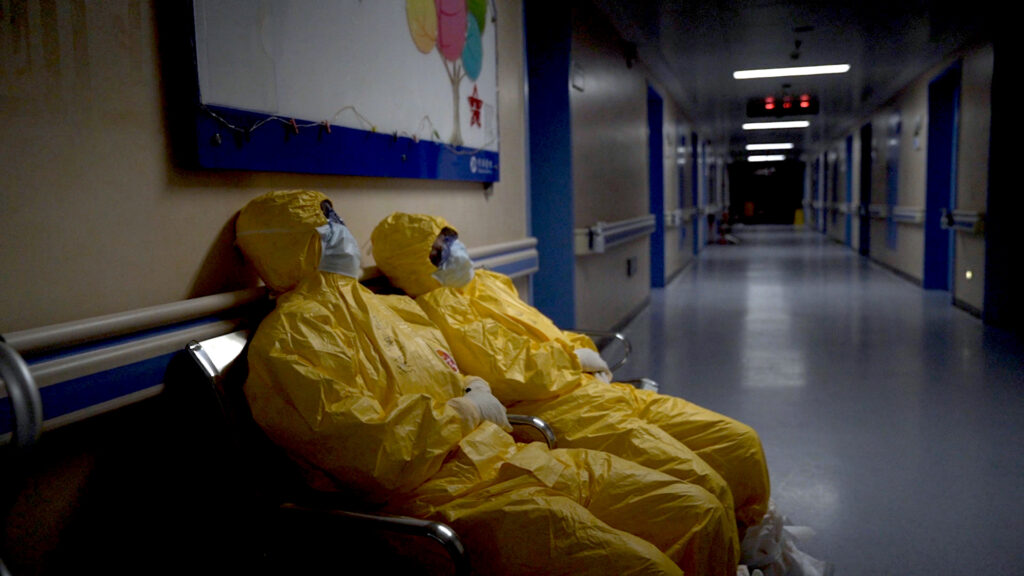 Nurses collapse from exhaustion in a hospital hallway during the peak of the COVID-19 outbreak in Wuhan, China. As seen in 76 Days, directed by Hao Wu, Weixi Chen and Anonymous. Image courtesy of MTV Documentary Films.

The coronavirus has fundamentally changed life on earth for practically every country. The film 76 Days provides a front-row seat into the heart Wuhan hospitals from February to April, as the rest of the world began to grapple with what we were all about to face. The result is often jarring to watch, an important reminder of the stakes at hand across our planet.

Directors Hao Wu, Weixi Chen, and a third collaborator credited as anonymous to protect their identity, present a narrative at the heart of the action, shot mostly within the contamination zones at four separate hospitals. The doctors and nurses, all decked out in head-to-toe protective equipment, are clearly under siege, doing the best they can to handle these unknown and chaotic circumstances. The directors do a fabulous job framing each scene, camera angles that make you feel like you’re in the room with the patients and staff.

The fear and anxiety are palpable in the air with every moment. Many of the doctors do not exactly have the best bedside manner, perfectly understandable given the stakes at hand. We’ve known all along that the doctors and nurses are the heroes of this global pandemic, but 76 Days gives them a chance to be seen as people. Like the rest of us, many of them are scared, doing their best under enormous pressure. There is great power in their resilience.

While the filmmakers take a mostly hands-off approach to the narrative, there are a few strands that come together to form a cohesive story. An elderly patient receives a great deal of focus, growing restless under the strict demands of the hospital. A film like 76 Days hardly needs to spend much time presenting protagonists to root for, but the filmmaker’s approach gives an added sense of depth to the material. This isn’t just a living history, but a story of people caught in the whirlwind.

Perhaps most striking is the similarities between some of the patients and the broader American fatigue that many feel toward the virus. Everyone is tired of COVID, from mask-wearing to not being able to see your loved ones. 76 Days is a powerful wake up call to anyone not taking this pandemic seriously, a gut-wrenching display of the stakes at hand.

76 Days is often very difficult to watch. The pain and suffering rarely lets up, though it’s clear that the filmmakers are aware of this tonal dynamic. There are points for hope. The history of the coronavirus is not fully written yet, but 76 Days does a hell of a job presenting the early weeks of this global nightmare.