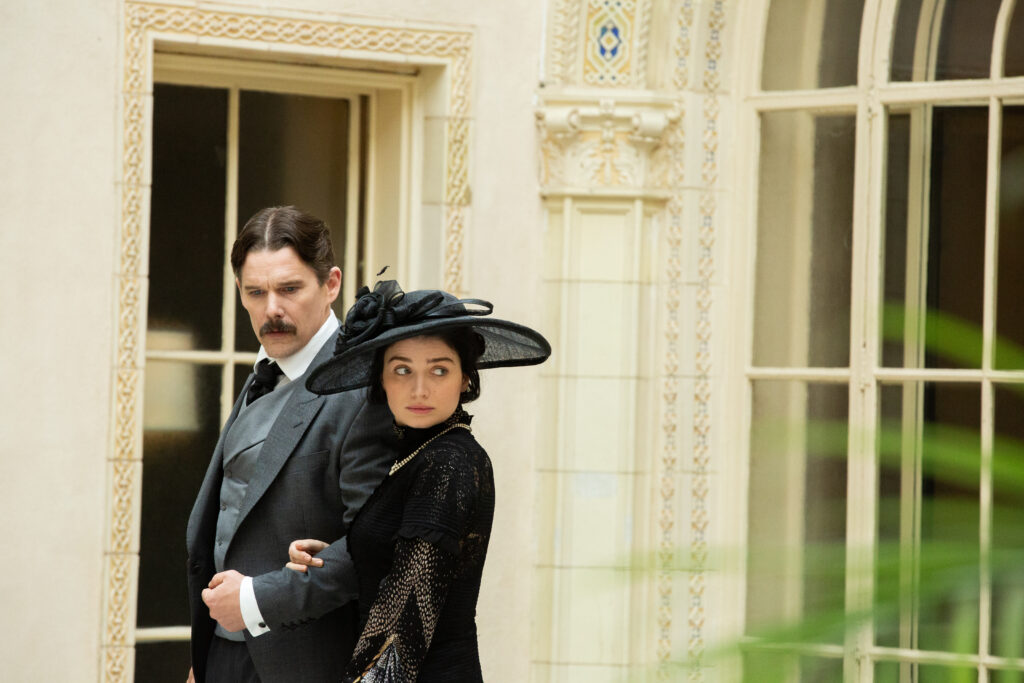 As a director, Michael Almereyda brings the right kind of energy to Tesla, recognizing the pitfalls of the biopic genre. Nikola Tesla is a figure whose contributions to electricity do not receive the widespread credit that others such as Thomas Edison enjoy. Almereyda subverts his subject, offering an irreverent depiction of Tesla that sadly is never quite as fun as it wants to be.

The film jumps around quite a bit through Tesla’s life, presented through the eyes of Anne Morgan (Eve Hewson), who functions both as an ahistorical omniscient narrator and as a figure within the story. Tesla (Ethan Hawke) spends much of the film feuding with Edison (Kyle MacLachlan), though plenty of the time is spent on absurdist antics that hype up its protagonist’s perceived genius.

The acting is quite competent. Hawke plays the mad genius trope well. MacLachlan is a great cold-hearted rival destined to steal Tesla’s thunder. Hewson is cool and collected functioning as the narrator, guiding her audience through the history. There aren’t really any complaints to make, except that none of them really take the ball and run with it. Absent are any truly standout performances that might make the whole experience more memorable.

Hawke’s Tesla is more of an object of the film than its subject. Almereyda is less concerned with exploring Tesla as a person than he is exploring the idea of Tesla. Tesla rolls around on rollerblades, often in sets that look pretty modern, and it’s kind of cute to watch. For a little while.

The idea loses steam as Tesla struggles to present anything except for the blatantly obvious as its findings. Anyone reading a brief description of the film could probably accurately assume that Almereyda wants to present Tesla as an under-appreciated genius. In that regard, Tesla feels very safe as a narrative, despite presenting itself as an outlandish dark comedy.

What’s further unclear is what exactly Almereyda expects his audience to feel about Tesla. History can be corrected in a sense, but the experience isn’t compelling enough to entertain the kind of critical thinking Tesla’s legacy deserves once the credits have rolled. The whole ordeal evokes a shrug, and not much more.

Almereyda’s pitfalls are best represented as the narrative rollerblades toward its climax, using a karaoke sequence of a song that’s been played many times in film, in nearly identical settings. Tesla might be appealing to anyone who’s never seen an artsy movie, but too often it plays notes that have already been deployed in more compelling efforts. Here, it just looks kind of weak.

Tesla fails both as a biopic and as a work of entertainment. The absurdist sequences feel quite bland in the absence of any substance regarding Tesla’s life. Tesla may be a misunderstood genius, but Tesla doesn’t do a good job making anyone care. The whole thing may have worked better as a series of vignettes, with a shorter runtime better masking the absence of substance.