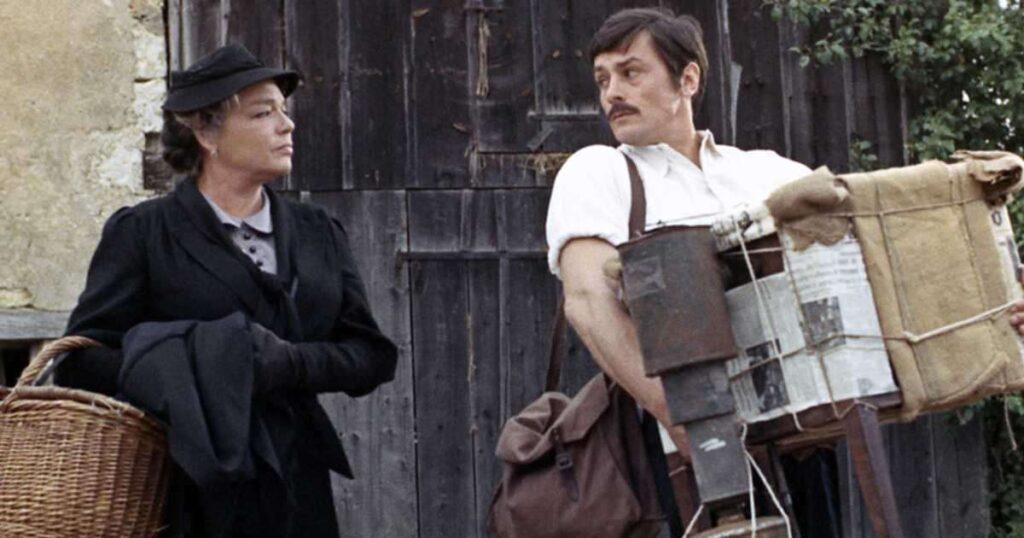 The thought of stumbling upon another family’s internal drama is quite frightening, yet this dynamic supplies much of the fodder for reality television. To watch others hurl proverbial feces at each other can evoke a certain desire to turn inward, to take stock of one’s own life and character. Decades away from any installments of The Real Housewives, 1971’s The Widow Couderc (original French title La veuve Couderc) strikes at the messy nature of family relationships.

Jean (Alain Delon) is a simple man trying to escape from prison. A quiet village next to a canal in Burgundy offers a place to lie low from the police, where Jean finds work in the service of an older woman named Tati (Simone Signoret). Tati doesn’t have much to call her own besides the roof over her head, land coveted by her late husband’s family. For Jean, caught between Tati and her young niece Félicie (Ottavia Piccolo), the feud invites the kind of attention he’d be wise to avoid.

Much of the film is fueled by the sexual tension between Delon and Signoret, two immensely talented actors who bring out the best in each other. Both are on the run in a way, Jean more literally than Tati, two souls desperate for more than what life has to offer. Neither one of them are particularly good people, both using Félicie as a foil for their worst instincts, but the film presents a compelling perspective on logic clashing with desire.

The sleepy canal town, with a manually operated drawbridge, functions as a town in its own right. Hardly a place anyone would wish to visit, the quiet community only comes alive when something dares to disrupt its peaceful existence. Property is fought over not because it’s valuable, but seemingly because there’s nothing else for one to occupy their time with. The drama fills the void.

The Widow Couderc is a contemplative narrative, one more concerned with raising questions than presenting answers. The acting is top notch, with Delon and Signoret in peak form. We often don’t get to pick the circumstances in our lives, only the way we choose to react. Decisions don’t always need to make sense, reflective of the humanity that guides us for better or for worse.