Tiger King Proves Sometimes Reality Is Better Than the Dream 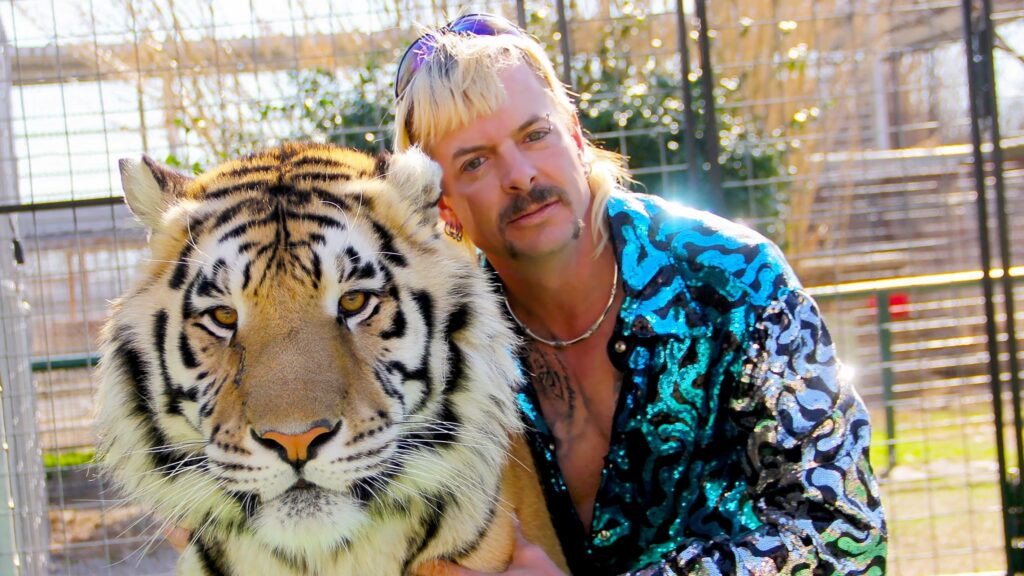 America finds itself in a period desperate for distractions to take our minds off the collective sense of anxiety many of us feel toward the present state of affairs. Cooped up at home, a narrative like Tiger King: Murder, Mayhem, and Madness scratches this itch perfectly, the kind of train wreck you can’t look away from even as every fiber of your being feels dirty for having spent time with its subjects. The best true crime stories are the ones that are too absurd to work as pieces of fiction, with twist after twist designed to completely overload the senses.

At the heart of Tiger King is its titular subject, Joseph Maldonado-Passage, better known as Joe Exotic, a man of poor taste in just about every sense of the word. For years, Joe Exotic reigned over the Greater Wynnewood Exotic Animal Park, a small zoo in Oklahoma. Joe Exotic owned hundreds of tigers, earning the wrath of animal rights activist Carole Baskin, who operates the Big Cat Rescue sanctuary in Florida. Exotic’s efforts to wage war against Baskin left him financially ruined, leading to him attempting to hire a hit man to murder her. A 2018 arrest for those efforts, among other charges, lead to twenty-two-year sentence, which he is currently serving.

Tiger King uses extensive footage filmed over several years, allowing the filmmakers to capture Joe Exotic and all of his antics before he found himself behind bars. Exotic is a natural entertainer of the Trumpian variety, a man perpetually capable of stooping to new lows with his asinine behavior and lust for the spotlight. Much like his zoo, Exotic appeals in the same way as toilet humor, a juvenility perfect for Netflix, where the audience can laugh along without feeling ashamed for their enjoyment.

The seven-part series covers a wide range of topics beyond the Exotic/Baskin feud, itself full of subplots. Fellow tiger enthusiast Bhagavan “Doc” Antle receives an extended profile, a similarly vile character who runs a preserve/harem in South Carolina. Tiger King strikes at the heart of the types of people who engage in the shady business of exotic animals, an expensive endeavor that leads to plenty of abuse, both of the animals and the employees lured to the premises.

A Shakespearian tragedy fitting for this dystopian modern era, Tiger King finds a sense of mesmerizing beauty in its perpetual race down the gutter. Joe Exotic is a truly terrible human being, selfish and vindictive, hardly a suitable protagonist or anti-hero. Likewise, he’s not wholly a villain either, having a kind of weird charm that tugs at the heartstrings, if only for a moment. In Baskin, the show finds a suitable foil, herself an odd character who walks under a perpetual cloud of suspicion after her husband mysteriously vanished in 1997. There are no heroes in Tiger King.

The great triumph of the series lies with its utter lack of moral message. Owning exotic animals is bad, yes, but that’s also something already well-apparent to many viewers in the year 2020. Tiger King isn’t all that concerned with stating the obvious. Instead, the series mostly just focuses on the absurd nature of its narrative. Each episode contains more plot twists than most movies could get away with. It is magnificent entertainment.

To call it a guilty-pleasure almost doesn’t feel right considering all that’s going on in the country. Pleasure is in short supply. Joe Exotic is a seemingly-endless supply of amusement. Tiger King isn’t just must-watch. It’s the perfect narrative for our times.

« Marcel Duchamp: The Art of the Possible Provides a Thorough Look at the Artist’s Career
Classic Film: Two or Three Things I Know About Her »