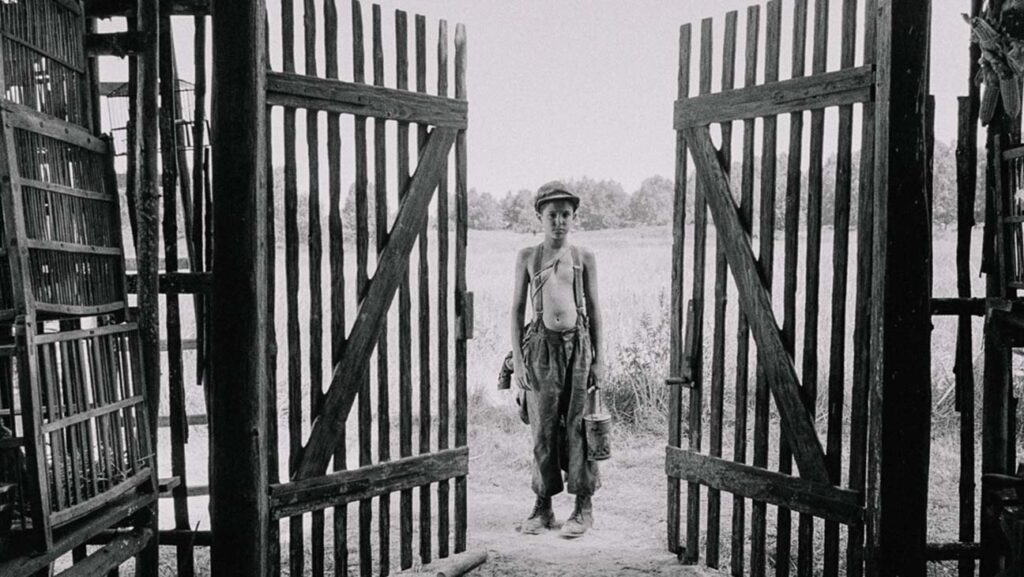 There are more films based on World War II than anyone can reasonably count. Based on a 1965 novel of the same name, The Painted Bird carries with it a certain unspoken understanding of the horrors that took place during that monstrous time. Filmed on 35mm black and white film while utilizing sparse dialogue, director Václav Marhoul possesses a masterful grasp of the unspoken, crafting a quiet, harrowing epic.

The narrative follows a young boy (Petr Kotlar) as he makes his way through war-torn Eastern Europe, trying to return home after the death of his aunt. The boy finds a few kind souls along his journey, but the vast majority of the people he comes across treat him as subhuman, treating him as a slave among plenty of other horrors. Humanity is scarce across the savaged region.

Marhoul divides the film up into segments divided by a character’s name. This approach works quite well for the nearly three-hour runtime, preventing the audience from getting too overwhelmed by all the terrors. The narrative is pretty relentlessly brutal right from the start, sequence after sequence of jaw-dropping imagery that never really lets up.

The boy functions as a reactionary protagonist, spending most of the film responding to the circumstances laid out before him. Kotlar is an excellent young actor, mostly demonstrating the boy’s emotions through nonverbal cues. Hollywood mainstays Stellan Skarsgård and Harvey Keitel pop up briefly, but the film belongs to Kotlar.

The film uses a mix of Slavic, Czech, German, and Russian, but dialogue is deployed in such a way that the narrative almost feels more like a silent film. Full scenes go by with barely any need for subtitles. The landscapes are beautiful, but the black and white cinematography and horrific actions depicted prevent the audience from spending too much time admiring the views.

The Painted Bird does take a bit of time to find its footing, a slow burn content to take its time. The film picks up steam in the second act, having laid out the terms of its narrative in a way that keeps you engaged without constantly guessing what will happen next. Though largely a bleak story, Marhoul finds small slivers of hope in places where you’d least expect to find them.

The runtime is a bit of a liability. Three hours is a long time to spend with a young protagonist who barely speaks, but the length of time helps solidify the hero’s journey, a duration designed to be as epic as his voyage. The narrative is designed to be exhausting, which Marhoul achieves early on. A few of the scenes appear to exist to serve that goal exclusively, a dynamic that’s perhaps a little too demanding on the audience.

The Painted Bird is a fantastic film that journeys to the very bottom of humanity depravity. It is certainly not for everyone, but Marhoul crafted a minimalistic masterpiece that packs an emotional wallop. Few narratives leave you quite as drained by the end, in desperate need of a hug.