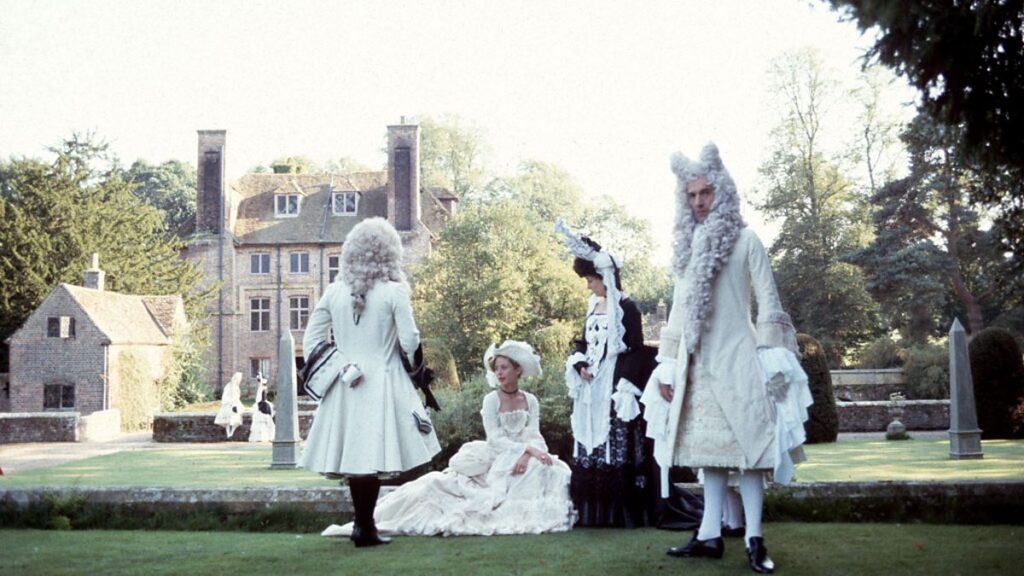 Peter Greenaway’s The Draughtman’s Contract revels in its take on convention, a kind of satire played with such a straight face that it could have been easily based on a nineteenth century novel. Set in the English Wiltshire in the late 1600s, the film follows an artist in his efforts to craft twelve landscapes of a country house. Filled with murder and cuckoldry, the narrative leisurely unloads on its audience, refusing to bend to any conventional understanding of storytelling.

Mr. Neville (Anthony Higgins) is an amusing character, though hardly the sort designed to be much of a protagonist. Neville is very particular about the atmosphere, forcing strict guidelines on the household to avoid parts of the property and certain parts of the day. The Herbert family must cater to Neville’s every whim, including his sexual desires, though the boredom of country life gives the routine an added sense of purpose.

The characters are distant, both in a figurative and literal sense. Greenaway frames most scenes to resemble portraits, rarely adjusting the camera. Without close-ups, the true point of view is hidden, or perhaps left up to the audience. The freedom of interpretation carries a liberating burden, leaving one to decide what matters on their own terms.

The costumes are absolutely delightful. Each character is dressed about as flamboyantly as possible. The excesses of the aristocracy are in full display, a group determined to be measures by the layers and tulle on their bodies. If it’s meant to be parody, Greenaway assures that it’s carried out with as much of a straight face as possible.

Greenaway’s success lies in his ability to be simultaneously distant and welcoming, a charm that buoys the film’s peculiar narrative. Much of the action centers around Neville’s work, but The Draughtman’s Contract isn’t too concerned with his artistic output. It’s a murder mystery that doesn’t care much about resolution. Simply put, it’s a film that gives the audience significant leeway to draw from it whatever they will.

Some may find that approach unwieldy, a film unconcerned with articulating a message or with whether or not its audience can relate to its main character. The Draughtman’s Contract is crafted to force one to think, in the absence of any obvious conclusion. The narrative manages to be compelling while divorced from any necessity to interpret its findings.

Rare are the kinds of stories that exhibit such comfort in the unresolved. Film supplies its audience with brief portraits into their characters’ lives that are implied to carry much grander weight, much like a landscape intends to capture the full essence of its subject. Life is rarely that convenient. More lies beneath the surface, either for people to discover or to be the subject of endless speculation. The Draughtman’s Contract delights in the ways it can manipulate its audience’s emotions both during the film’s runtime and for a good while after.

« Classic Film: Made in U.S.A.
Teen Titans Go! vs. Teen Titans Is a Loving Victory Lap for the Franchise »