Relish Is a Muddled, Derivative Take on Teen Angst That Lacks Focus 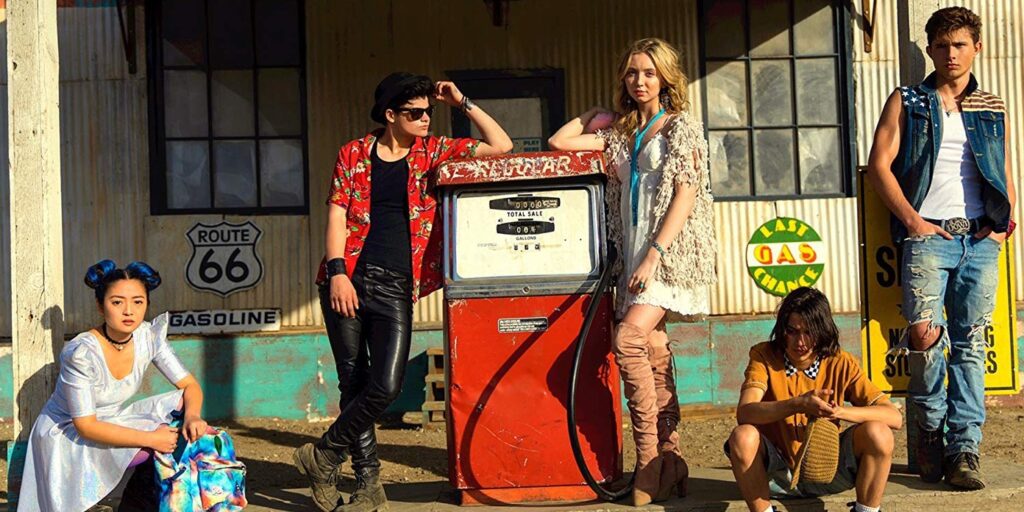 The idea of doing a modern day take on The Breakfast Club is certainly tempting for many teen narratives. The genre owes much to John Hughes, who had a knack for understanding angst in a way that’s hard to replicate. With Relish, director Justin Ward takes a stab, putting forth a narrative that serves as less of an earnest homage than a pathetic rip-off.

The film follows five teenagers as they escape from the Deacon Treatment Facility. Kai (Tyler DiChiara) is a young transgender man struggling in a world that doesn’t accept his gender identity. Aspen (Hana Hayes) is a social media influencer with an unhealthy addiction to her phone. Levi (Mateus Ward) is addicted to opiods while Sawyer (Chelsea Zhang) battles OCD and a fear of being abducted by aliens. Rounding out the bunch is the manic depressive Theo (Rio Mangini), who’s quiet and reserved as he tries to keep his demons at bay.

Ward essentially frames the narrative as a road film, with the teens on their way to a music festival via stolen car. As with many stories, the journey is more important than the destination, except for the fact that the journey isn’t really all that important either. Relish mostly plays out like a series of vignettes with some half-baked philosophy thrown in to give the film some semblance of purpose.

The script is absolutely horrible. Ward muddles his film with terrible dialogue, ruining plenty of almost-sincere moments. He’s fairly competent at framing scenes, but the substance of the interactions falls flat. It’s a movie that’s clearly trying to come across as sincere, but lacks the words to adequately communicate its intentions.

The transgender representation is also an unfortunate mixed bag. DiChiara is a great actor, comfortable and confident in the lead role. Trouble is, the script gives him so little to work with that you end up feeling sorry for the actor rather than the character.

Ward’s lack of understanding of trans issues is apparent in the way he frames Kai’s story. The script offers him nothing but misgendering and repeated mentions of “the operation.” It’s superficial and tedious, an utter waste of a talented actor.

A similar dynamic is on full display with Aspen. Ward repeatedly swings and misses in trying to convey how a modern day social media influencer might behave. She’s not exactly a shallow character, but the way she talks about her online life sounds like it was written by someone with no understanding of how the internet works. As a result, Aspen’s scenes feel like they were crafted by a fourth grader, focusing solely on the most obvious traits of online life.

Relish has a talented young cast, but Ward doesn’t know how to use them. A laughably bad script tanks the entire experience. The film wanders around aimlessly for its runtime, trying to present snippets of meaning in scenes that fail to convey any understanding of modern day teen angst. Ward is no John Hughes, a fault that could be forgiven if he hadn’t tried to set up his film as a modern day take on The Breakfast Club. His film is pretty awful even before you hold it up to such a classic.

« The L Word: Generation Q Is a Slight Improvement on Its Shallow Predecessor
Portrait of a Lady on Fire Is a Masterpiece »