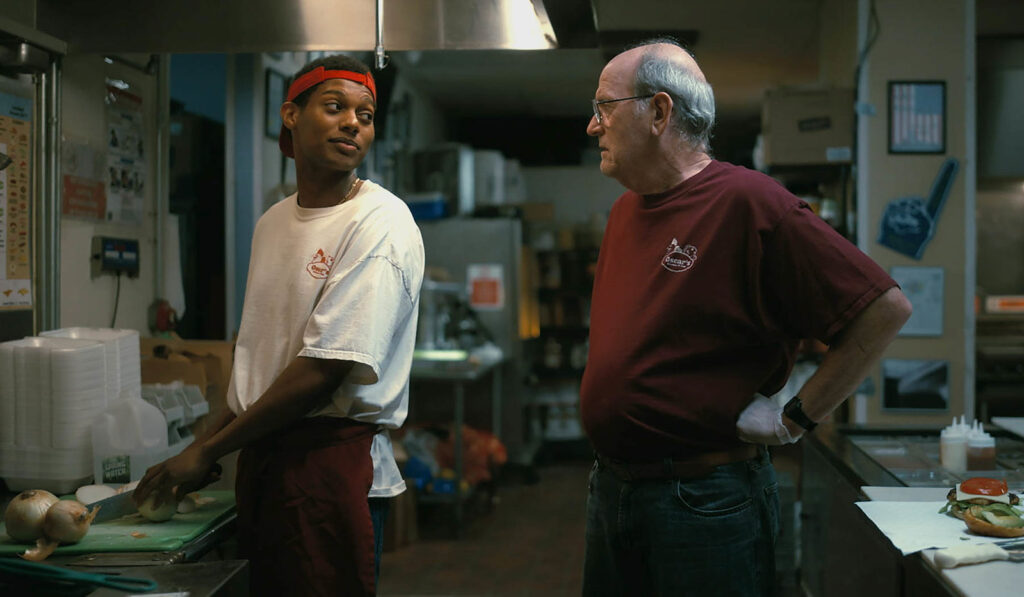 Shane Paul Mcghie and Richard Jenkins appear in The Last Shift by Andrew Cohn, an official selection of the Premieres program at the 2020 Sundance Film Festival. Courtesy of Sundance Institute | photo by Mott Hupfel.

Millions of people work low-paying jobs across the country. The proletariat sees its labor exploited by the bourgeoisie, who offer peanuts for a lifetime of service. The Last Shift takes a look at a fast-food worker looking to retire after thirty-eight years working nights at a chicken & fish joint. Unfortunately, the film never really knows what to say about its lead.

Stanley (Richard Jenkins) is a proud man and a hard worker. Looking for a life after the graveyard shift at Oscar’s Chicken & Fish, he hands in his notice with the intentions of moving to Florida to care for his elderly mother. His life in Michigan has been a sad one with only a few friends and no clear sense of direction.

Much of the narrative centers around Stanley training his successor Jevon (Shane Paul McGhie), a gifted writer struggling to get back on his feet after getting out of prison. Unlike Stanley, Jevon sees Oscar’s for what it is, a miserable place to work. He challenges Stanley to consider his legacy after thirty-eight years, an uncomfortable position for a man who doesn’t particularly enjoy challenging the status quo.

Jenkins and McGhie work well opposite each other, conveying a meaningful connection between their characters. Stanley and Jevon are polar opposites, but they develop an organic friendship as they battle the loneliness of the night shift. The Last Shift is more Stanley’s story than Jevon’s, but both see substantial character arcs.

Jevon offers a lot of social commentary that feels forced and superfluous to the film. The script also does a terrible job handling Jevon’s writing aspirations, giving him writer’s block that is tonally inconsistent with the rest of his story arc. For all that he’s got going on, choosing to have the character stricken with such an inconsequential dilemma feels absolutely bizarre.

The narrative is a muddled mess. The Last Shift never really establishes a cohesive story, riding a wave of various subplots for the course of its runtime. The film wades into race relations in a flippant manner, hinting at broader themes that it doesn’t care to pursue.

The third act feels completely arbitrary, like the film randomly decided which of its subplots to elevate as the concluding arc. Writer and director Andrew Cohn doesn’t force a neatly wrapped-up conclusion on the audience, but the end result is hardly satisfying. There are far too many unresolved strands by the end, quite ridiculous for a story that spends so much time meandering through its ninety-minute runtime.

Cohen lacks confidence as a director. The script is pretty terrible, full of clunky transitions and cliched twists. The strength of Jenkins and McGhie keeps the film from ever becoming unwatchable, but it’s a sad waste of talent.

The Last Shift takes an interesting premise and does everything it can to step on itself. Stanley and Jevon have a lot of depth as characters, two men with vastly different views on working minimum wage jobs. Unfortunately, the film doesn’t really care to explore this dynamic. It simply doesn’t make any sense why this film has so much filler. The pieces are all there, but Cohen doesn’t know how to put them together.