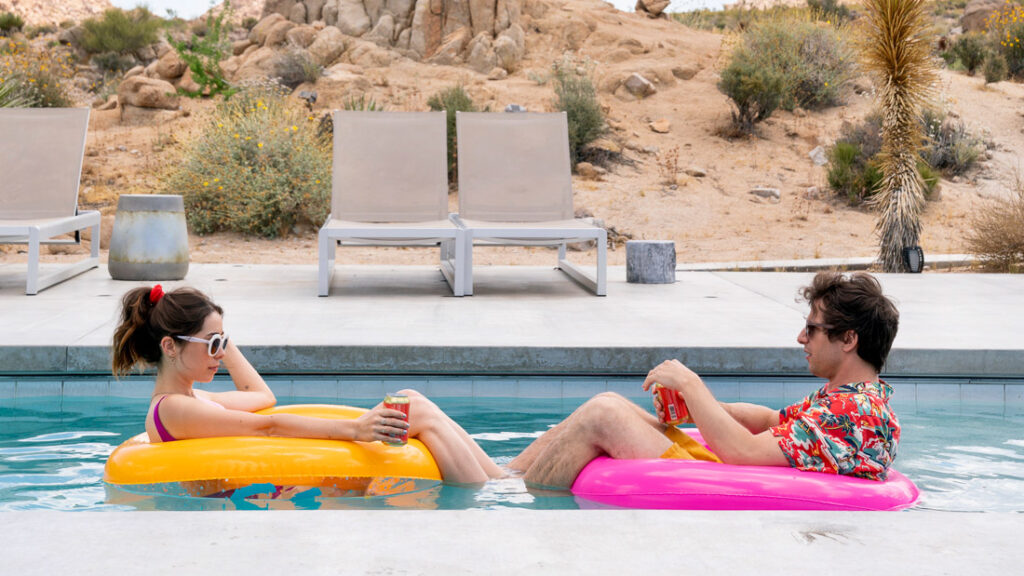 In the realm of time-looping comedies, Palm Springs finds itself in the company of one of the genre’s defining films. Groundhog Day is a classic, a philosophical narrative that delivers its laughs with a heavy dose of introspection. Backed by a terrific cast and produced by The Lonely Island, director Max Barbakow has crafted a film that blends science with nihilistic humor to create an unforgettable experience.

Sarah (Cristin Milioti) similarly finds herself trapped in the desert as the reluctant maid of honor. The black sheep of the family, she’s the kind of girl who would rather sulk in the corner than dance at a wedding. In Nyles she finds a confident, someone to share cold hard truths about the vapid nature of her surroudings.

Sarah quickly learns that Nyles is caught in a time-loop, finding herself trapped in the desert purgatory. Embracing the meaningless nature of infinite realities, the two embrace chaos, repeatedly ruining the wedding and living life in the process. Their biggest concern lies with Roy (J.K. Simmons), a guest hell-bent on killing Nyles.

Samberg, Milioti, and Simmons all give superb performances, looking like they’re having a lot of fun with the material. Samberg in particular looks absolutely giddy to be playing around with time, especially the weeds of quantum mechanics. The film makes a convincing case for its governing rules, poking fun at any potential holes the audience might find in its science.

The chemistry between Samberg and Milioti is palpable. Palm Springs subverts the romcom genre by lowering the stakes of the leads’ relationship. Nyles and Sarah need each other in a literal sense, to get out of the time-loop or stay sane in its web. They’re highly compatible as romantic partners, but Barbakow understands that this dynamic doesn’t need to be forced.

Nihilism isn’t often taking seriously in film, but Nyles is a fitting post-modern millennial. His outlook on the world is pretty dark, but that never stops him from having a good time. Samberg possesses a bleak brand of sarcastic optimism that gives Palm Springs plenty of laughs laced with a tinge of unease. It is the perfect vessel for his humor.

Barbakow has a remarkable knack for pacing. Palm Springs covers a lot of ground in ninety minutes, each scene finely tuned to accomplish a specific objective. The film flies by, the kind of story you wish could get stuck in a time loop to keep the fun going a little longer.

Palm Springs is a terrific commentary on finding companionship in a millennial era that’s given up the search for meaning. It doesn’t reinvent the wheel crafted by Groundhog Day, but manages to offer a fresh take on the concept. For a film with an excellent cast and plenty of laughs, Palm Springs doesn’t have to surpass an all-time great to make a worthwhile experience.