South Side Is the Funniest New Show of 2019 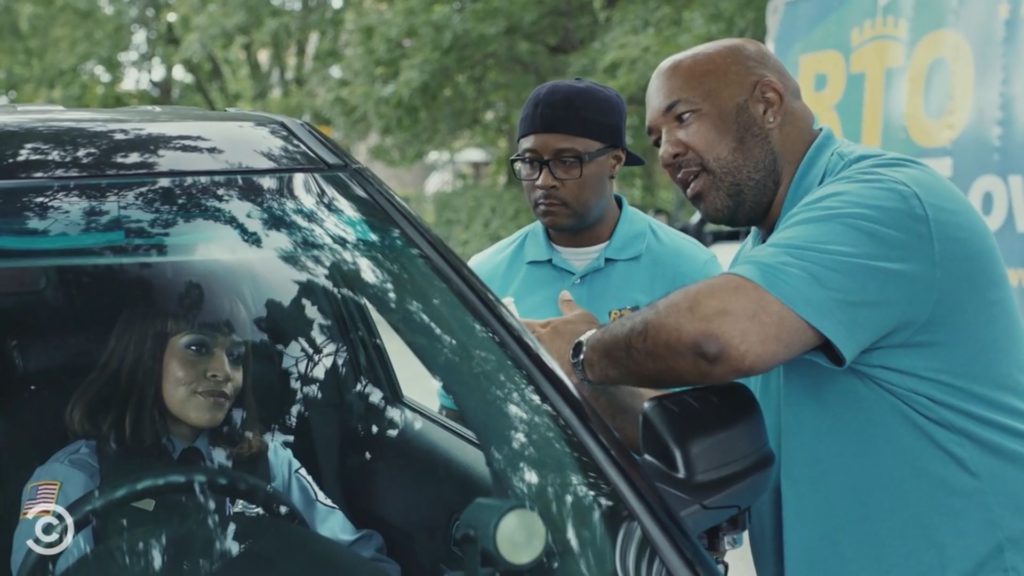 Plenty of great sitcoms have made their settings feel like characters in their own narratives. It’s hard to think of Cheers or Seinfeld without the culture of Boston or New York coming to mind, putting aside the inconvenient fact that both shows were filmed in Los Angeles. With Comedy Central’s new show South Side, from Late Night with Jimmy Fallon alumni Bashir Salahuddin, Diallo Riddle and Michael Bliedenl, Chicago lies at the forefront of the narrative. Filmed entirely on location, using actors who grew up in the city, the show delivers laughs at a mile a minute against a backdrop that puts the audience at the heart of the narrative.

Chandra Russell is perhaps the show’s breakout star as Sergeant Turner, a police officer constantly unsure of whether to do good or take care of herself in the process. Alongside Bashir Salahuddin’s “Officer Goodnight” the two cops are absolutely hilarious to watch as they skirt ethical lines, taking sides on disputes over Xbox repossessions and Air Jordans that give plenty of food for thought well after you’re finished laughing.

The writing on South Side is absolutely superb. Salahuddin and Riddle have the rare ability to sneak nail-biting jokes into dialogue when you least expect it, the kind of comedic timing that’s intertwined into the plot rather than as a throwaway gag. They find humor in just about every subject, from child-support disputes to Coretta Scott King.

The narrative finds the sweet spot between episodic and serialized across its first season. You don’t necessarily need to watch every episode in order to follow along, but there’s plenty of references that reward those who do. Much of the plots are presented almost like vignettes, but there is a sense of character growth as the show progresses. These characters are here to make you laugh, but the actors engage with them in a way that brings out a level of authenticity you don’t necessarily expect from most sitcoms.

Perhaps the greatest triumph of South Side is the way it feels culturally relevant without being overly political. Police corruption, racial injustice, and income inequality are hardly conventional comedic topics, but the show presents them in a humorous fashion that never feels like it’s making light of the broader issues. National politics are left out entirely, instead focusing in on the struggles of Chicago that have existed for decades. This is a show about the South Side by people who grew up there, presented in a fashion that’s quite accessible for an audience that may not be very familiar with the local culture.

South Side is the funniest new show of 2019. Each episode has more laugh out loud moments than plenty of other comedies manage in an entire season. The writing and acting are spectacular. Salahuddin and Riddle’s love letter to their community is the must-watch show of the summer.