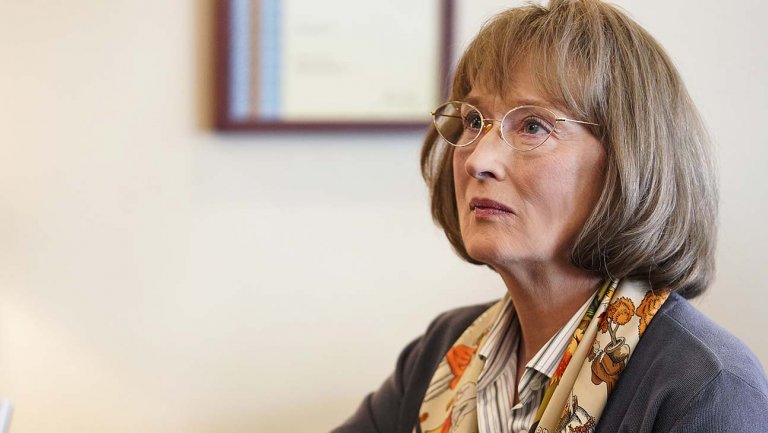 Much of the drama over the first season of Big Little Lies centered around who bit Amabella, hardly the kind of mystery that inspires legions of true crime fans. The show has always been at its best not when it’s focused on plot, but on the interactions between its all-star cast. Even in these crowded television landscapes, the idea of being able to watch Reese Witherspoon, Nicole Kidman, and Laura Dern every week is still a novelty worthy of appointment viewing. Throwing Meryl Streep into the mix was just about the only way the show could have upped the ante for a totally unnecessary second season.

As the finale notes, the very notion of a “Monterey Five” was always kind of a spectacle. Big Little Lies isn’t really a show about murder. The plot is by and large an excuse to get these A-list actresses together, with the one primary exception being the abuse that Kidman’s Celeste suffered at the hands of her husband Perry (Alexander Skarsgård). It makes sense that season two would center its primary plot around the fallout of Perry’s death, the result of being pushed down the stairs by Bonnie (Zoë Kravitz), prompting a cover-up by the other women.

Season two is only sort of about Perry’s death. The primary drama of the season is driven by Mary-Louise (Streep), who wages a two-pronged war on Celeste powered by skepticism over the cause of her son’s death and a belief that her daughter-in-law is an irresponsible mother. The second half of the season is almost entirely driven by the custody battle, always a highly unrealistic proposition considering how rare it is for a grandmother to triumph over a parent.

The narrative struggles can be best illustrated through Amabella’s disco-themed birthday party in episode four, an outlet that seems far more designed for the grownups than the children. It’s a sequence that makes little sense given the Klein family’s financial trouble, but Big Little Lies has always been a show about moments, rarely the bigger picture.

The finale, “I Want to Know,” includes plenty of powerful acting from Kidman and Streep, but it’s all in service to an outcome everyone knows is coming. The show never really tried to sell this custody battle as anything more than filler, a plotline created to give its leads something to do.

Season two’s biggest shortcoming is the way it prioritized Mary-Louise at the expense of Bonnie. The show doesn’t completely ignore the guilt she feels over killing Perry, but it’s rarely given much focus either. Bonnie isn’t particularly close to the other leads, but the show is far too content to keep the character at arm’s length.

Just as season one wasn’t really about a murder, season two isn’t really about the aftermath of Perry’s death. Both seasons have plenty of subplots that don’t factor into the show’s overall arc, largely because it only sort of needs one. Madeline’s entire season two plot could be erased from the show and little would change.

Big Little Lies didn’t need a second season, but a lack of purpose isn’t really a problem for the show. Season two’s biggest shortcoming was that it injected a predictable custody battle into the heart of its narrative. Mary-Louise’s efforts to get the police to reopen the case ended up largely being a feint, something to pass the time rather than a predominant storyline. The show treats the biggest moment of its first season as a weird afterthought.

Above all else, season two isn’t much fun. While that might have been understandable considering the way the last season ended, the show minimizes that event in a way that draws too much attention to the gaping hole at the center of the plot. There’s joy to be had watching Meryl Streep perform, but the show seems to have forgotten to give her a reason to be there.