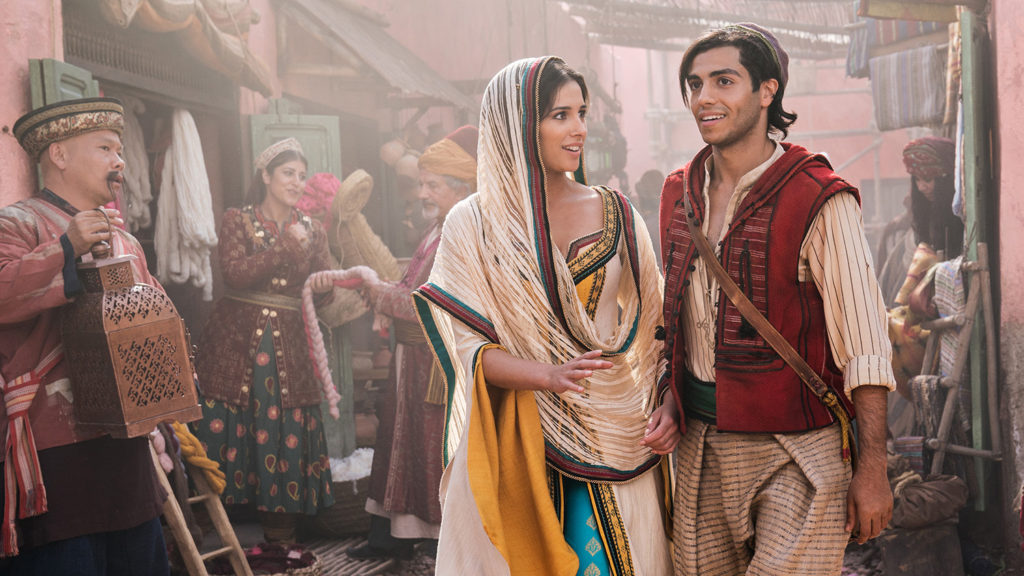 The frequency with which Disney live-action remakes are hitting the theatre can make it easy to forget that the process of creating them requires vastly different individual mandates for each film. A film like the original animated Dumbo only ran for a little over an hour, leaving plenty of room for a live-action adaptation to make its own mark on the material. The animated Aladdin however clocks in at ninety-minutes, a feature-length film in its own right. Guy Ritchie’s live-action adaptation had the tall order of capturing all the key plot moments from its animated predecessor while also giving its own cast enough time to shine.

Ritchie’s Aladdin is bolstered by three very strong performances from its lead actors. Mena Massoud and Naomi Scott are eminently charming in the roles of Aladdin and Jasmine. The two have a lot of natural chemistry and give welcoming performances that have the audience rooting for their characters by the end of the first musical number. So far Maleficient is the only live-action adaptation to receive a sequel, but I’d actually really like to revisit Massoud and Scott’s interpretations of the characters in a follow-up.

As the Genie, Will Smith had an impossible task in following the late great Robin Williams, whose take on the character remains one of the most iconic voice acting performances of all time. Smith does a great job in differentiating the two, crafting a character completely different from his animated predecessor. Smith’s Genie is less zany and far less in your face, but he’s still an empathetic figure capable of delivering plenty of laughs.

While Massoud, Scott, and Smith all do an admirable job bringing classic characters to life, the film moves far too quickly to give any of them a chance to breathe. Despite the fast pacing, the film feels like quite a slog with a two-hour runtime. The performances bring their own magic to the table, but there’s only so much Ritchie can do with his film’s organic moments while also serving the narrative of its predecessor.

Jafar might be one of the most memorable villains in Disney history, but Ritchie, unfortunately, diminishes his larger-than-life presence in the live-action film. Marwan Kenzari does a serviceable job playing the character, but he never gets a moment to shine. We learn nothing new about Jafar’s motives and there’s no song featuring the character. He’s the only character who feels smaller in the real world, reduced to merely a narrative obligation.

Ritchie’s Aladdin struggles to find its own voice while constantly serving the narrative of its source material. Like Smith’s Genie, Scott’s Jasmine is a totally different character than her animated counterpart, but the scenes that highlight her personality often feel clunky when mashed together in between recreations of iconic scenes from the original. As a result, the film feels far more derivative than it should, stifling its own sense of originality while trying to juggle too much.

The musical numbers are often entertaining, but perhaps predictably fail to recreate the sense of awe and wonder put forth in the original. The audience knows what’s coming. Ritchie should know that, but he doesn’t do much to trying and recapture any luster. The film is at times far too content to pale in comparison to the original.

Making matters worse is the fact that the strict adherence to the plot of the animated original constantly reminds the audience of how much time is left in the film. The two-hour runtime is far too long for something that predictable. It’s rarely outright boring, but the slower scenes aren’t helped at all by the familiarity of it all.

Aladdin is occasionally entertaining, but the film fails to stand out in any meaningful way. The actors put forth an admirable effort, but they’re not allowed enough opportunities to truly stand out. There are times when the film feels like it’s trying to do too much, but the result is that it feels like it accomplished nothing at all by the time the credits start to roll. Young children might be wowed by the impressive scenery, but the overall experience is regrettably empty.