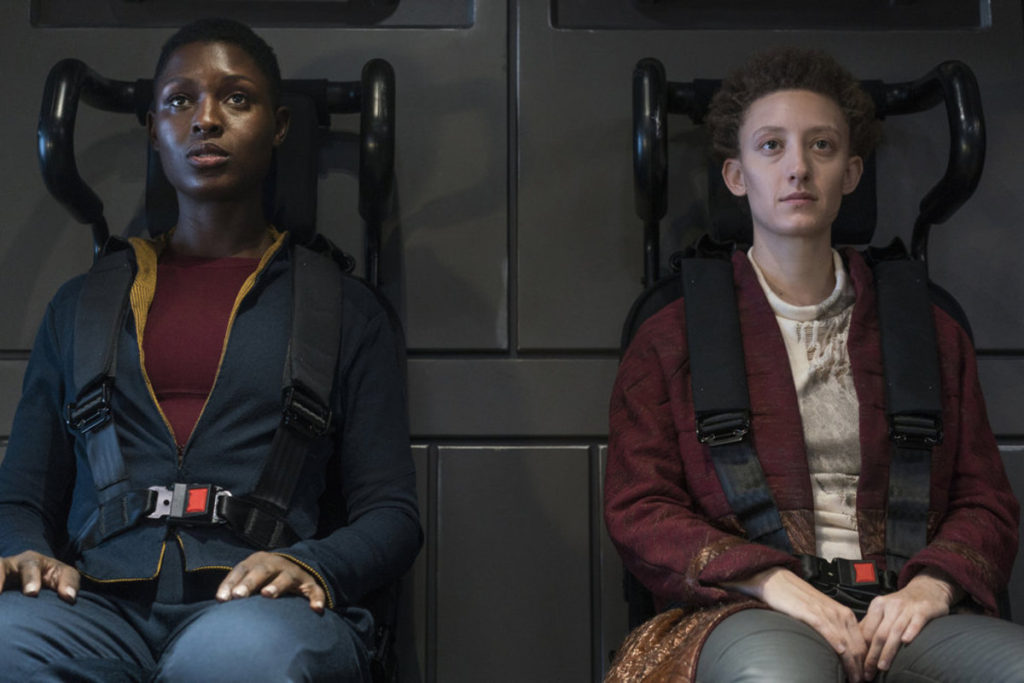 For some reason, it feels weird when cable networks try to emulate their streaming counterparts and debut shows at a faster pace than the standard week-to-week model. The idea of broadcasting a new show on consecutive nights certainly can present the notion that such an occasion is “event viewing,” but the mind also wanders to the motive behind such a deviation from the typical rules that govern television. For SyFy, airing a show like Nightflyers four times a week over a two-week stretch could be advertised as a special holiday treat for those who detest Santa-themed offerings, but instead mostly comes across as an attempt to be done with this incoherent mess as quickly as possible.

Nightflyers is based off a novella by George R.R. Martin, written a little over ten years before the release of A Game of Thrones, the first volume of his magnum opus. With the wild success of his A Song of Ice and Fire series, it seems inevitable that more networks would want to jump in on adapting his extensive back catalog. The biggest problem for Nightflyers is that the show plays like somebody took that too literally, jumping into a series without taking the usual steps that go into crafting a narrative that anyone watching would actually care about.

The plot of the show is fairly simple. A group of scientists go looking for alien life and bad things happen. It’s the kind of show that spends such little time on character development that describing any of the people onboard the ship seems like I’m doing the show’s work for it. There’s an obligatory pain in the ass brought on the ship who no one likes and an engineer who seems to be doing an impression of an indifferent android. There’s romantic tension among the other characters. The show kind of throws this stuff out there without ever really conveying a sense that these are actually people anyone cares about. As a result, it’s hard to get invested in any of them.

That kind of hollow strategy might work over a ninety-minute horror movie, but falls flat over the course of a ten episode season. The early seasons of Game of Thrones each sought to adapt a thousand-page book. Nightflyers seems completely lost with one-tenth of the material. There’s a fair amount of filler, which is presented in a way that makes it hard to differentiate from the moments where it wants to advance the story. The show has random cutaways at times that feel like a student filmmaker fooling around in the editing room.

Nightflyers is the kind of show that feels like it exists solely because of the fame of the author of its source material, with little to no effort put in to actually create a worthwhile experience. The show has decent production values, even though much of it feels like it was created by a Kubrick fanatic assigned to knock off The Expanse. Nightflyers is a plodding derivative mess that never seems interested in giving its viewers anything to care about. SyFy appears to have dumped this one over a two week period in order to make sure everyone has forgotten about this turkey by the time the holidays are over.