Halt and Catch Fire is the Best Show on Television 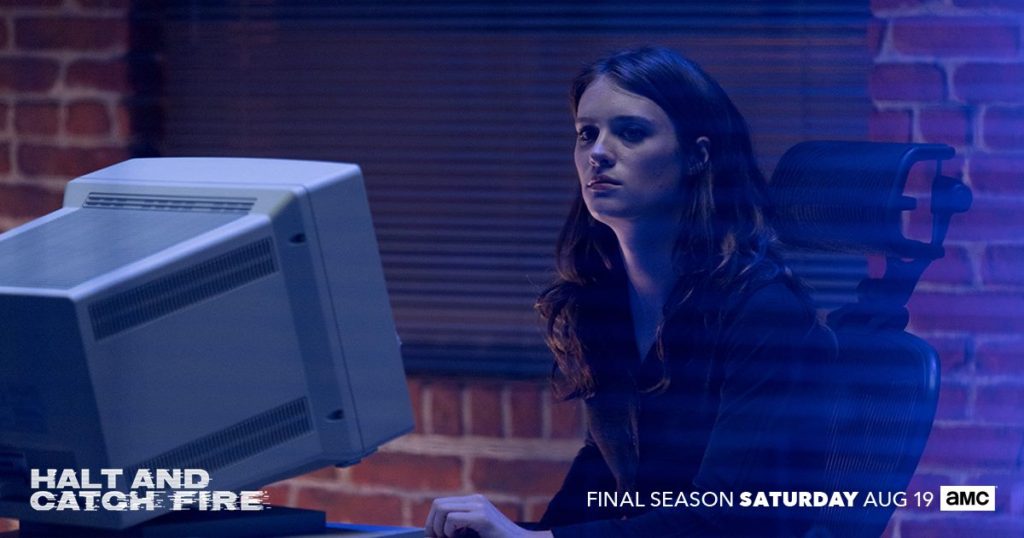 There was a fair degree of love at first sight for me with Halt and Catch Fire, having been a big fan of Lee Pace since Pushing Daisies aired in 2007. Oddly enough, season two established the technology driven period piece as the best show on television, after Pace’s Joe McMillan had been relegated to supporting status. Reshuffling the deck has grown to be one of HaCF’s defining traits, practically rebooting the plot each year.

Many shows succeed through the risks their characters take, endearing them to the audience along the way. Halt and Catch Fire has always upped the ante, fearlessly blowing up the show whenever it best suits the plot. Television shows inevitably leave a lot on the table. The medium only allows for so much ground to be covered in ten or thirteen episode increments over a few years’ time. Having spent its entire life suffering from low ratings and an uncertain future, HaCF has always understood this better than most.

The character development of the five lead characters over the course of the first three seasons demonstrates Halt and Catch Fire’s masterful deployment of its assets. The time period is fun to explore, but just with Mad Men, the actors and the writing are the true defining features. These characters endear themselves to the audience in a unique way because they’re not held back. They all have extremely messy relationships with each other. The show never tries to hide that or superficially fix it for the sake of the plot. It wears its emotions on its sleeve, allowing the audience an intimate look at what these people are going through as they try to make their mark on the world.

The show has mastered the art of the emotional payoff. There have been times throughout the first three seasons where I’ve thought the plot is dragging on a bit, only to be blown away by the story’s progression. It understands pacing like few other shows on TV.

Season four will be the last round of adventures for Joe, Gordon, Cameron, Donna, and Boz. I say that with sadness because I’ll miss them terribly, but there is comfort in the fact that this show gets to go out on its own terms after spending four seasons holding nothing back. Too many shows, including the one that originally endeared me to Pace, haven’t been afforded that chance.

Halt and Catch Fire was never a ratings success. It’s been ignored at the Emmys. Its final season will start in two days, on a Saturday, the insulting, irrelevant graveyard slot. I could write that this is somehow poetic, or that The Wire received a similar cold shoulder throughout its initial run, but it bothers me. There are a lot of scripted TV shows currently airing. Hundreds. Probably too many, but I still say with certainty that this one is the best of the best. I don’t really believe in the concept of “peak TV,” as I imagine this is a label the present era will always want to hold, but HaCF is the best example contradicting that notion.

I urge you to watch this show. The first three seasons are on Netflix. I know everyone has shows they’re meaning to get to. Take my advice and put those aside in favor of this one. You won’t regret it. No one I’ve recommended the show to has.

AMC deserves credit for recognizing what a special show it has, even if it dared to air it on Saturdays. It probably would have been a smarter business decision to cancel it and spend the money on another battle sequence for The Walking Dead. As Halt and Catch Fire has demonstrated time and time again, the economic bottom line shouldn’t be the only consideration. There’s also the matter of the heart. These characters have more heart and more than any on television.

« Game of Thrones Season 7 Recap: Episode 5
That Time Uber Kicked Me Out for Being Transgender »