Entertainment Weekly Interview With Kit Harrington Is A Red Herring 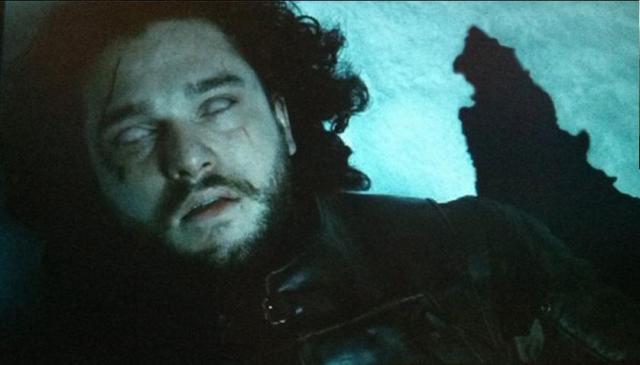 Something not so surprising happened last night on the season finale of Game of Thrones. No, I’m not talking about Jon Snow getting stabbed. Even non-book readers could see that from a mile away with all the conspicuous shots of Olly looking pissed at the Lord Commander. I’m talking about the Entertainment Weekly interview.

People were shocked to see both Kit Harrington and Dan Weiss confirm Snow’s death. Seems rather unnecessary considering that the fate of the character is still up in the air in the books. George R.R. Martin hasn’t told us. So why did they?

More important, why did they talk to Entertainment Weekly before the episode had even aired? I thought HBO decided that doing that was a bad idea after the first four episodes leaked. So what’s the deal?

Jon’s stabbing was likely the series’ worst kept spoiler going into this season, but Harrington and Weiss went out of their way to try to persuade us that Jon isn’t Azor Ahai. The problem with that lies with a certain Red Priestess.

Why else would Melisandre go back to the Wall to be in Jon’s general vicinity right before he got stabbed? Does she enjoy the weather? Did she forget that Thoros of Myr could bring people back from the dead even though he was a terrible priest? I doubt it.

Yet there weren’t really any blatant Azor Ahai signs, though some fans are saying his eyes look like he’s warging. Ghost was nowhere to be seen, though he did make an appearances a few episodes ago.  Jon did look dead, though so did Beric Dondarrion. Would the show really kill off one of its major characters just like that?

Maybe, but doesn’t seem likely. I stated in this morning’s recap that I was okay with Jon being dead. The Entertainment Weekly interview has made that a nonissue. Jon Snow is alive. We’ll know for sure in a few months when leaked photos start to surface.

So why the charade? Seems like something Littlefinger would do (maybe that’s why he was barely in this season). With a show as big as Game of Thrones, it can be very difficult to surprise your audience. If you can’t shock them with content on the show itself, making a fake interview that posts right after the show airs seems like the perfect ploy to achieve that effect.