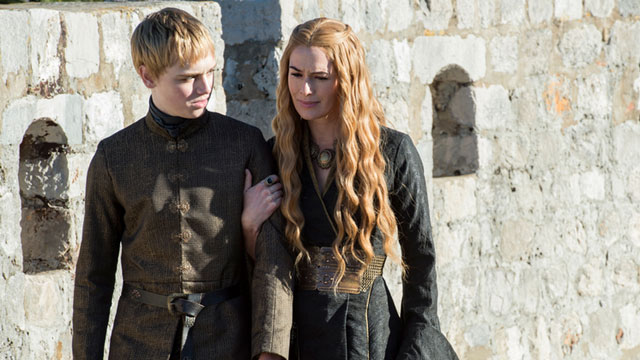 This episode was more or less completely off book, which isn’t necessarily a bad thing, though I’m pretty upset with idea of losing Ser Barristan (less so with Grey Worm, but I’ll get to that later). It looks like the changes made to the King’s Landing plotline have been made to speed things up, but there have been some puzzling changes made in the process. Let’s start with the Faith Militant.

In the books, Cersei allows the Faith Militant to be reformed as a concession for the Faith forgiving a rather large debt to the Iron Throne. It’s also worth noting that at this point in the books, the Iron Bank of Braavos has not thrown in with Stannis. Having Cersei be the one to suggest reforming it is the complete opposite, but it actually fits well with the Queen Regent’s inevitable downfall.

The plotline in King’s Landing through A Feast For Crows is largely summed up by Cersei being paranoid that Margaery is trying to control Tommen. The militant hasn’t done anything drastic and Margaery and Tommen haven’t had sex and don’t even share the same bedroom. We’re not even really sure that Margaery is scheming at all. Tommen is much younger and mostly plays with his kitties throughout the books, though it looks like the age of the actor and HBO’s desire for more sex scenes were the main causes behind the change.

The show isn’t tethered to Cersei’s POV and has chosen to cast Margaery as a legitimate force of opposition to Cersei instead of allowing her to simply cause her own demise. The Faith Militant actually serves both of these purposes, creating more problems for Cersei as well as fueling the feud between the Queen and the Queen Regent. As I said last week, it also makes sense to utilize the talents of Jonathan Pryce, which is also why Olenna Tyrell appears to be headed back to King’s Landing. More Diana Rigg is always a good thing.

The show took a weird deviation last season when Tywin told Cersei that the Lannister’s mines were empty and they were broke, when in the books it’s the just the Crown that has money problems. The Tyrell alliance was forged for military purposes and nothing else. Perhaps the show didn’t want to include the Faith’s loans to the Crown because it’s confusing that a religious organization would do something like that or because it heightens the Iron Bank/Stannis problem.

It’s also worth noting that Loras Tyrell is a member of the Kingsguard in the books and his homosexuality is never used a big plot point, though most characters seem to know about it. Cersei sends him away to take Dragonstone and it’s claimed that he was severely injured, but there are plenty of reasons to think that wasn’t the case. I still think it’s possible that he could be elevated to Kingsguard, but more on that in future recaps.

Sending Ser Merywn to Braavos with Mace Tyrell seems to suggest that he’ll run into Arya, which follows her plotline albeit with different characters. That’s from a The Winds of Winter sample chapter though so I won’t go into it here. I don’t care much for Mace so it’s nice to have him out on King’s Landing.

Time for some Stannis! There’s another weird deviation when Melisandre brings up being left behind at the Battle of the Blackwater and tells Stannis not to do that again. In the books, she stays at the Wall when Stannis rides south to Winterfell.

The show’s emphasis on Shireen seems to reinforce fan speculation that Melisandre will sacrifice her to the Lord of Light. The show went out of its way to mention that she should come to the Wall last season, which also suggests that she’s important. That scene with Stannis and her was maybe the most touching scene in the whole show. If you didn’t shed a tear, you might not have a soul.

I think that Jon will join Stannis and march on Winterfell, which is both a deviation and a violation of his vows. This seems fitting as Jon doesn’t have much to do at the Wall and I don’t think there will be anymore fighting between the Night’s Watch and the Wildlings for now at least. Jon does decide to go to Winterfell eventually in the books, but that turns out to be a not so good idea. I do think that Melisandre will eventually cast Stannis aside as Azor Ahai in favor of Jon, but probably not until the end of the season.

I continue to find Sansa in Winterfell completely implausible from Littlefinger’s perspective, but nothing really happens so I won’t spend too much time on it. Something worth noting is that in the books, a large part of Roose Bolton’s army in comprised of Frey’s after he makes a deal to give them the Dreadfort after he dies since Ramsey will inherit Winterfell (though it’s doubtful that Ramsey would ever honor this).

Since Littlefinger is Lord Paramount of the Trident, he’s actually the Freys’ overlord. Though neither the books nor the show pay much attention to Littlefinger’s possession of Harrenhal, this is a possible reason why there aren’t any Frey’s besides Fat Walda in Winterfell. Or maybe they’re just overlooked like Dany’s Dothraki bloodriders. Maybe I’m reading too much into this.

Time to talk about that horrible moment when Ser Barristan and Grey Worm get stabbed, which most certainly did not happen in the books. I hated every bit of it. The show has never done justice to Ser Grandfather, who’s a complete badass in the books. I don’t think the show will kill them both off and it seems more likely that Grey Worm will survive.

So why kill perfectly awesome living characters? There’s a couple reasons. In the books, Dany has by far the best supporting cast, which makes up for the fact that she’s pretty annoying herself (I covered this in an article last year on Strong Belwas, who isn’t in the show). The limited screen time makes it impossible to do justice to all her great characters so they’ve cut most of them. With Tyrion, Ser Jorah, and possibly Varys on the way, perhaps they wanted to make room for new characters in Meereen, though with Tyrion there it stands to reason that there would be more screen time to accommodate them. Ser Barristan also doesn’t like Ser Jorah and wouldn’t trust a Lannister so maybe they killed him off to avoid having to address that.

Another reason is the fact that there really hasn’t been a ton of action so far. All the action scenes including Brienne’s weird killing spree, Jaime and Bronn in Dorne, the Faith Militant’s Occupy King’s Landing Movement, and now with Sons of the Harpy, have all been created just for the show. AFFC and ADWD don’t have a lot of action. The action was kind of mindless in the case of Brienne, but for the most part it’s been nice.

The big problem I have with Ser Barristan’s highly probably death is the fact that it could serve as a spoiler for the books. Ser Grandfather commands Daenerys’ forces in the Battle of Meereen (a battle that will not be happening in the show), which takes place at the beginning of The Winds of Winter (three sample chapters depicting the start of the battle are available already). There’s a ton of fan speculation of how the battle will go and much of it pegs Barristan the Bold as a goner. As someone who was skeptical of Ser Barristan dying during the battle itself (though I’m much less skeptical that he’ll survive all of TWOW), I’m annoyed that the show has caused me to reconsider.

We’re almost at the halfway mark for the season. It feels like it’s going rather fast, but things are certainly shaping up to be exciting. As a devout book fan, it’s kind of nice not really knowing what will happen, with only Cersei’s plotline heading in the same direction as the books (possibly Arya’s as well).