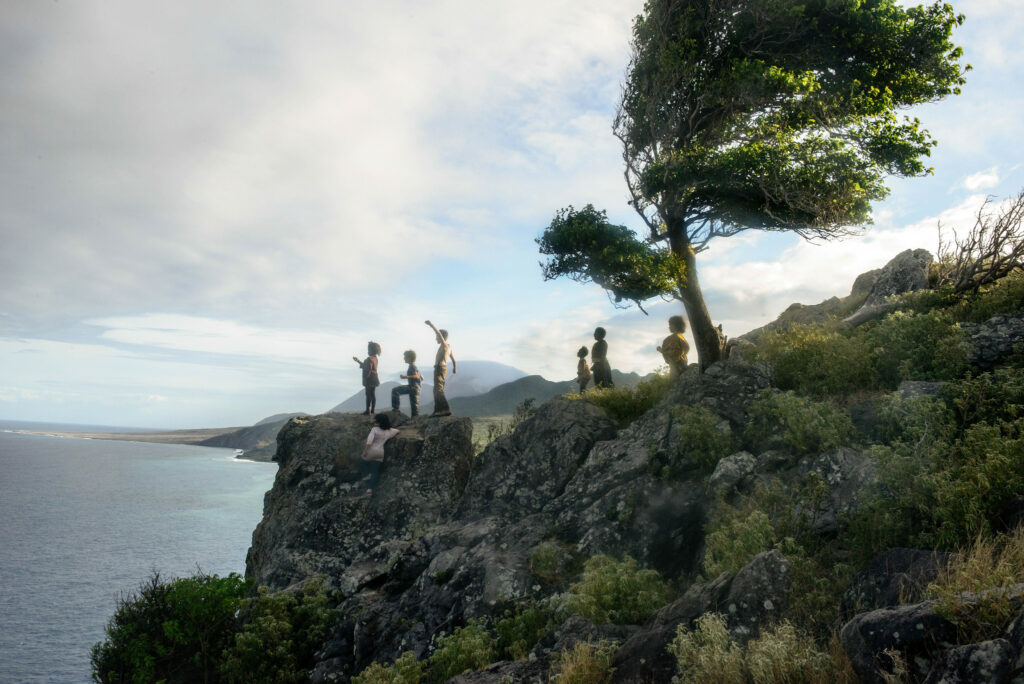 A still from Wendy by Benh Zeitlin, an official selection of the Premieres program at the 2020 Sundance Film Festival. Courtesy of Sundance Institute.

The story of J. M. Barrie’s Peter Pan is a timeless narrative, a tempting tale for ambitious directors to try to tackle. Benh Zeitlin made a big first impression with his delightful Beasts of the Southern Wild, an ambitious indie that packed an emotional punch. With Wendy, Zeitlin aims for the stars, often forgetting what direction to fly in.

Wendy (Devin France) is an imaginative young girl who enjoys playing by the train tracks next to her mother’s diner with her two older brothers (Gage Naquin and Gavin Naquin). One night, the three find themselves whisked away to Neverland by a very young Peter (Ahmad Cage). This Neverland is a peculiar place, more like purgatory than paradise.

Zeitlin is quite skilled at turning each scene into an individual artistic moment. Wendy is an absolutely beautiful film. Largely filmed in the Caribbean, the cinematography provides visual overload time and time again.

The film doesn’t really use a conventional narrative. It’s a meditative work, mostly concerned with the soul-sucking nature of aging. The characters behave in fantastical fashions, but the film is a quieter take on Pan.

The young cast is quite talented, working with a script that often sounds like it was written by a college freshman obsessed with their first philosophy class. The script is a one-trick pony, uninterested in anything resembling normal human interaction. That wouldn’t necessarily be a problem if the plot knew how to do anything other than meander along at a glacier-slow pace.

For a while, the film is pretty fun. Zeitlin throws the kids into some pretty outlandish scenarios. It feels good to be in Neverland, until the place starts looking like a post-apocalyptic dump in a clunky transition.

The first half works far better than the second. Wendy is a beautiful yet completely empty experience. Pleasing to the eyes with nothing for the soul. It’s a sad shame of a movie, one with so much obvious potential that can’t find a way to connect to the audience.

Zeitlin doesn’t really have an answer for what to do with Peter, wasting the character by putting him in a position that struggles to justify his presence at all. It may be titled Wendy, but Peter often feels weirdly irrelevant. Cage brings a lot of intrigue to the role, but the film rarely channels his energy.

Wendy is also way too long for its own good. With a runtime of close to two hours, the film runs out of steam long before its end. Zeitlin clearly has some points to make about the nature of aging, framing young and old in a weird black-and-white manner. He struggles to convey them in a way that would translate to an audience already bored by his antics.

There are other smaller issues with the pacing and the uncomfortable ways Zeitlin tries to move the plot forward. Some of it is just plain gross. The cinematography and the narrative exist on two separate planes, banging into each other like waves on the beaches of Neverland.

Wendy has so much potential as a film. It’s so beautiful and well acted, made by a director with a keen sense for detail. Almost all the pieces line up, but there’s a gaping hole in the middle that brings the whole thing crashing down. Most disappointing.