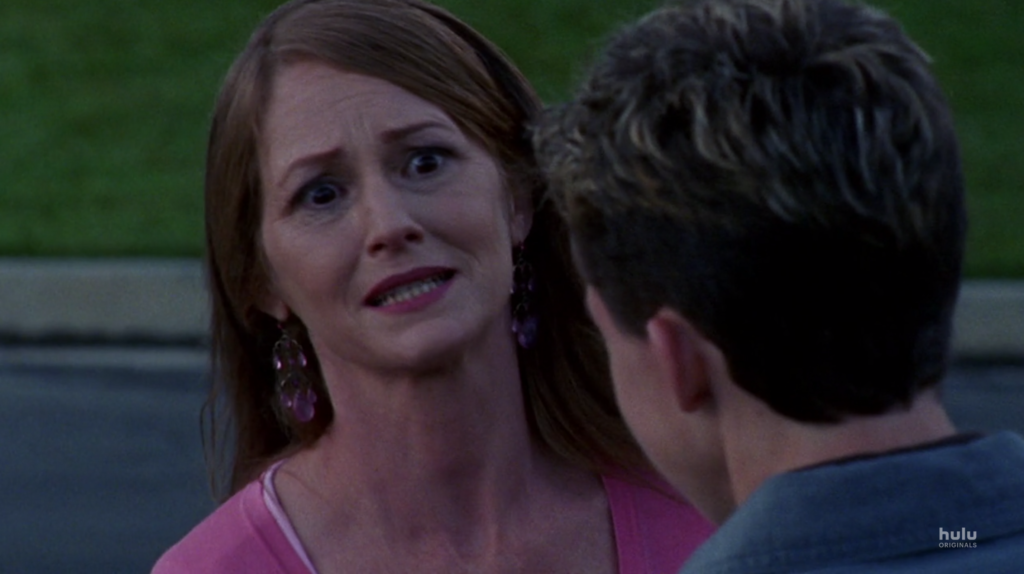 Despite its relatively small audience, Veronica Mars made an impact in 2004 with its strong feminist lead and mature themes that took high school life seriously. The show took on grief, mental illness, and income inequality among other hard-hitting topics, rarely content to dive into the kind of melodrama that defined other teen narratives. While the show typically handled complex issues with grace, its early first season episode “Meet John Smith” made an absolute mess of transgender rights.

The episode begins with Justin (Bobby Edner), a run of the mill, mildly misogynistic teen who enjoys ranking girls based on their attractiveness with his buddies. Justin works at a video rental store, where a customer (Melissa Leo) seems to enjoy his recommendations. A visit to the store by Veronica and Keith leads to Justin enlisting Veronica’s help to find his long-lost father.

From the first scene of the episode, it’s clear that something’s up with Justin’s case. Not only is it odd that a one-time character with a seemingly sympathetic case would be introduced in a scene painting him as a desperate womanizer, it makes little sense that Justin would know so little about his own father’s absence. There is no trace of “John Smith,” cut out from family photos and rarely spoken of by Justin’s mother. Justin suspects something is astray, but wants to find his dad to help with his family’s poor financial situation.

The case gets weirder when Veronica asks Wallace to pull Justin’s file after an extensive letter-writing campaign aimed at finding the John Smith in a haystack. It turns out that Justin’s father died while he was in the first grade, a detail he declined to share with Veronica. To muddy the waters further, Veronica receives a letter from one of the John Smiths with impeccable handwriting. An effort to track the local John Smiths based on the letter’s area code narrows the field down quite a bit.

A convenient grocery list in one of the John Smith’s cars leads Veronica and Justin to uncover the mystery. The man they thought was John Smith turns out to be a parole officer, dating the woman who wrote to Veronica. John Smith is actually Julia Smith. Justin’s father is a transgender woman, the very same one who relies on his movie recommendation prowess.

There’s more than a few things wrong with this whole “better dead than trans” narrative. It’s unclear how the custody battle over Justin played out, but Julia clearly isn’t okay with being completely absent from her son’s life. She drives 90 miles just for brief interactions with her son, a painfully sad notion. Justin’s mother doesn’t appear in the episode, but Veronica lets her off the hook, noting that she understands why her mother opted for the whole false-death narrative.

What’s missing in all of that is how messed up it is for anyone to have told a young child, a first-grader, that they had lost a parent who was alive and well. “Well” being the keyword here. Julia is shown to be in a stable relationship with the man they mistook for John Smith, leaving grocery list post-it notes on his rear-view mirror. There simply isn’t a compelling reason why Julia couldn’t be a part of her son’s life.

Justin’s initial “circus freak” reaction is a bit more understandable, given the shock and the idea that trans issues were hardly mainstream in 2004 let alone to a high school boy, but what’s missing from this narrative is any time to process those emotions. After a conversation with Veronica, Justin extends an olive branch to Julia, letting her know that a film he’d recommended was in stock.

To some extent, the brevity with which Veronica Mars engages with its transgender moment is perfectly understandable. Justin isn’t a main character, with this episode being his sole appearance on the show. This episode also has to deal with Duncan’s struggles with his anti-depressants and Veronica’s own relationship with her mother.

There are some aspects of the way the show handles transgender issues that can be forgiven due to the time period, such as casting Melissa Leo in a trans role. That issue, in particular, persists to the present day. Film and television have only recently begun to take trans representation seriously, taking much of the weight off an episode that aired in 2004 to get everything right.

This episode mines transgender issues for a cheap plot twist without dedicating the time to adequately grapple with the consequences of its narrative. “Meet John Smith” ends on a relatively happy note, though nothing can make up for the needless time lost between Justin and Julia. For any closeted trans people watching, Veronica Mars paints a bleak portrait of what lies ahead. For a show that handled so many issues with grace and dignity, this episode was among its lowest moments. 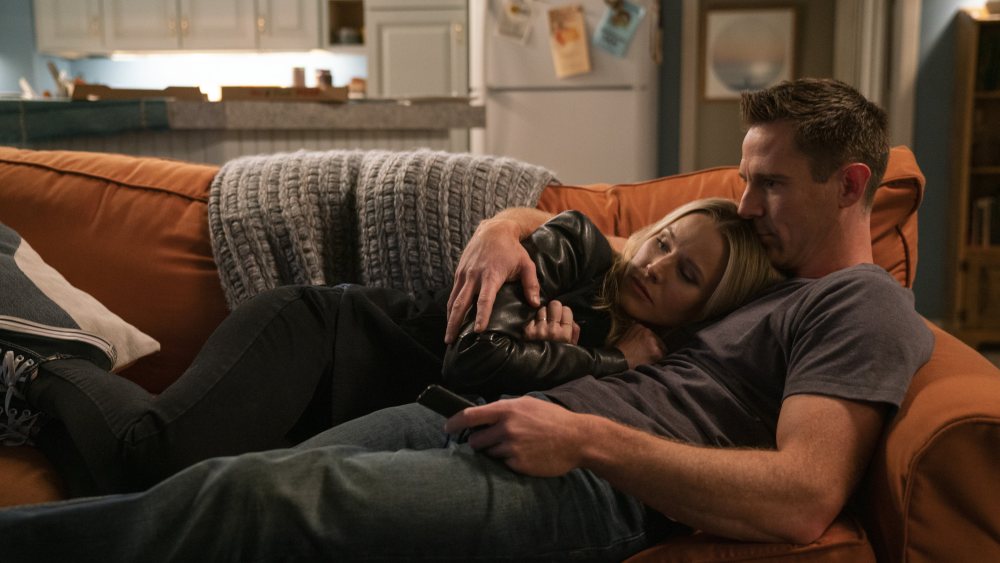 The television landscape has changed quite a bit since Veronica Mars made its debut in 2004. Its first network, UPN, hasn’t been around for more than a decade. Its current home, Hulu, didn’t exist yet, as cable networks were only just starting to focus on original programming, let alone streaming. The quirky high school detective show felt like a breath of fresh air, taking on the youthful territory of rival network The WB with an adult sense of maturity.

Like practically all high school dramas, Veronica Mars experienced some growing pains after graduation. The UPN/WB merger left plenty of shows fighting for space on The CW, which cancelled Mars after its third season, the first overall on the new network. The show’s cult fanbase has ensured that its legacy has lived on, first in a 2014 film of the same name, and now a fourth season of eight episodes.

The fourth season follows its predecessors’ lead in having one big mystery, but the shortened episode order leaves this case as the predominant narrative. The early years let the cases unfold over the course of a twenty-two-episode arc, allowing plenty of time for character development and other various subplots. This season manages the balance between mystery and character, but its execution leaves a lot to be desired.

Plenty of Veronica Mars characters return over the course of the fourth season, but only Veronica (Kristen Bell), Keith (Enrico Colatoni), and Logan (Jason Dohring) remain at the heart of the narrative. Trouble is, the show doesn’t really have anything new to say about Veronica’s relationship with either man. There’s still plenty of witty banter between Veronica and Keith, but Logan mostly mopes around while on leave from the Navy.

The “will they/won’t they” relationship between Logan and Veronica existed at the heart of the show’s narrative for its entire run. Season four maintains the status quo to its own detriment, pursuing this well-trodden turf at the expense of any other kind of character development. For all the ways this season managed to put high school in the past, the melodrama between two grown adults feels like misplaced nostalgia.

The mystery at the heart of the season involves the bombing of several Spring Break destinations across Neptune. Patton Oswalt and J.K. Simmons stand out as newcomers Penn Epner, a pizza delivery guy and amateur sleuth solver, and Clyde Pickett, an ex-con serving as a fixer for Dick Casablancas Sr. The mystery has plenty of twists and turns, serving as the season’s primary focus without feeling overly drawn out.

To its credit, season four hardly lives in the shadows of what came before it. Old Veronica Mars characters return infrequently, almost always with purpose. Fan favorites such as series regulars Wallace (Percy Daggs III), Weevil (Francis Capra), and Dick (Ryan Hansen) aren’t around much, consistent with the passage of time since these characters would have played natural roles in each other’s lives. The show demonstrates a sense of maturity for not picking the low hanging fruit of forcing these people together to recapture the good old days.

Season four exists in a state of limbo, a revival that doesn’t cling to the past while not being overly committed to the idea of a future for Veronica Mars either. High school is over. The show knows that, but what comes next remains oddly up in the air. As a revival, this kind of makes sense since no one really knows what the future will hold for the series, but the narrative doesn’t face the same obligations.

Veronica Mars is still a fun show to watch. It’s decidedly less fun than it used to be. Thoughts of its theme song’s refrain, “we used to be friends,” remain ever-present. We all have memories of days gone by. Television possesses the ability to bring those dreams alive again, but some of the magic is lost when wishful thinking becomes reality.