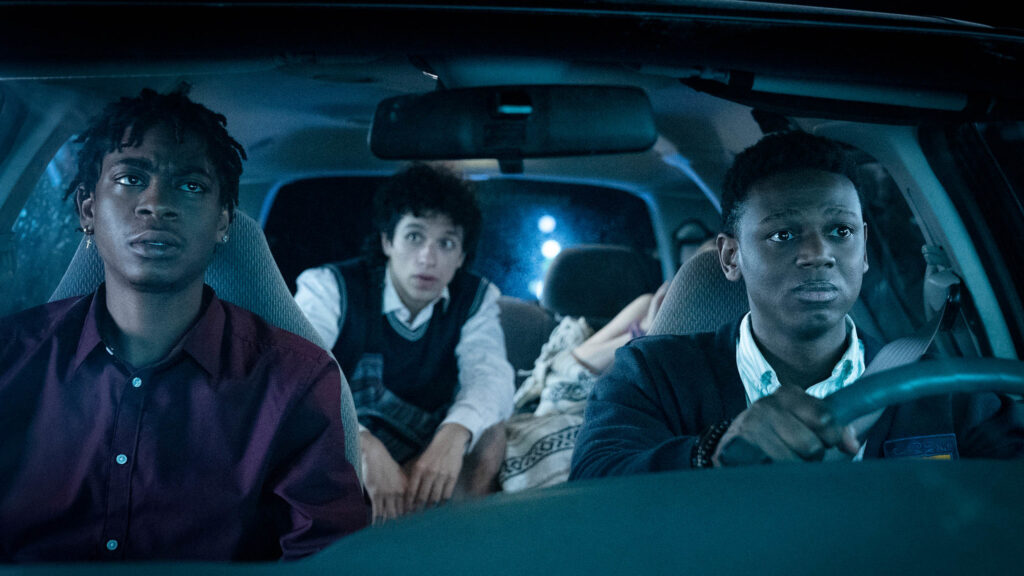 College narratives often ground themselves in the fleeting sense of adventure before the pressures of the real world consume lives that were once preoccupied with red solo cups and late night glow parties. Students of color have often lacked the full freedom to engage in such youthful indiscretions with the same benefit of the doubt that their white counterparts might enjoy. Director Carey Williams blends dark comedy with social commentary in his powerful second feature Emergency, adapted from the 2017 short of the same name.

Kunle (RJ Cyler) and Sean (Donald Elise Watkins) are best friends doing their best to navigate a superficially woke college campus. Seeking to attend seven college parties in one night, the two second-semester seniors hope to make the most of their remaining time together before the real world pulls them apart. Unfortunately, for them, their plans are scuddled by the presence of a random girl (Maddie Nichols) passed out on the floor of their off-campus housing.

The bulk of the narratives follows Kunle, Sean, and their roommate Carlos (Sebastian Chacon) as they attempt to drive the girl, nicknamed Goldilocks, to the hospital, understanding the reality of how the optics of three students of color and a catatonic white girl will be perceived by law enforcement or their university. Kunle, anxious about his acceptance into a Princeton Ph.D. program, also carries the anxiety of not being sure how to break the news to Sean, exacerbated by the dark turn of what was supposed to be an epic evening. Tying the two story strands together are Kunle and Sean’s differing perspectives on what it means to be black in America.

Williams is a fearless director able to craft humor amidst horrific circumstances, aided by Cyler and Watkin’s delightful chemistry. College narratives often have “teachable” moments that basically exist to bookend the film’s storytelling intentions. Emergency manages to have some of that same harmless fun without ever blunting the social commentary about what it means to be a young black man in America.

The tonal shifts are at times quite jarring. The streamlined narrative does drag a bit at times across the 105-minute runtime. Williams’ greatest strength as a director is his ability to shock his audience, even in scenes that might otherwise be completely predictable in nature. The humor doesn’t always land, but Emergency possesses a degree of sincerity rarely found in a genre that often celebrates the superficiality of the college experience.

College films often invite their audience to live vicariously through their protagonists. Emergency peels back the layers enough to explore the inauthenticity of that sense of shared experience in higher learning, but without abandoning the trappings of the genre entirely. Few narratives manage to run such a diversified gauntlet of emotions in a single feature.